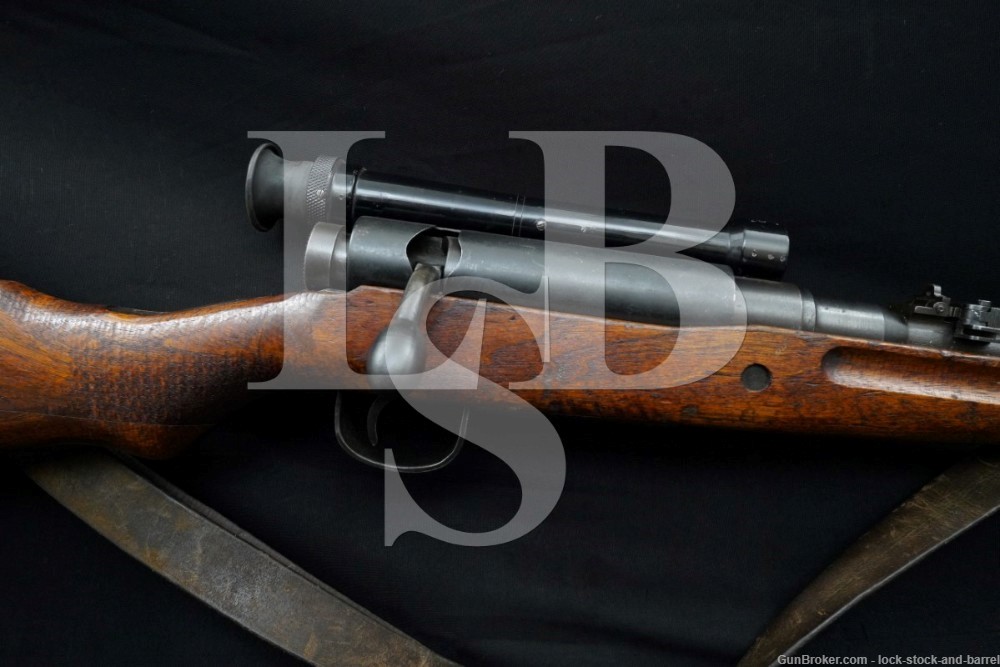 Markings: There is no visible import mark. The top of the receiver is marked with three Japanese characters that translate to “99 Type”, the top rear of the receiver is marked with the Kokura arsenal marking and the serial number “1795”. The chrysanthemum has been completely removed. There is a line on the left of the barrel shank that matches a line on the receiver. The bottom of the safety, bottom of the bolt handle, and firing pin are marked with the last 3 digits of the serial number. The rear of the safety has decorative metal work on it. The rear of the dust cover is marked “995”. The side of the scope attachment piece is marked with Japanese characters denoting “99 Type” and another character possibly denoting scope or optic. The top of the scope is marked “4 X 7°”, the manufacturer logo, and “No, 12124”. For more information on the markings see pages 210 – 215 of Joe Puleo’s book, Bolt Action Military Rifles of the World.

Sights / Optics: The front sight is an inverted “V” post set between two protective ears. The rear sight ladder has a fixed aperture when down and a sliding aperture when flipped up. The ladder is marked from “3 – 15”. The anti-aircraft sights are missing. Mounted to the side of the receiver is a Type 99 sniper scope. The scope shows scattered nicks and dings on the external surfaces. The lenses are slightly cloudy yet remain a decent level of visibility. The scope rates in about Very Good condition.

Stock Configuration & Condition: The hardwood stock has a pistol grip, finger grooves, nosecap with bayonet lug, hole for the cleaning rod, two side mounted sling loops with a brown leather sling attached, through bolt, and a metal buttplate. The buttstock consists of two pieces, the lower tang wraps around the bottom piece to better secure the piece. The wood shows scattered scrapes, scratches, and compression marks. The most notable of these are on the bottom of the forend. There are no chips or cracks. The LOP measures 12 ½ inches from the front of the trigger to the back of the buttplate, which shows a patina appearance and several dings and scratches. The stock rates in about Very Good overall condition.

Overall Condition: This rifle retains about 80% of its metal finish. There is thinning around the muzzle. There are some scattered nicks and scratches about the metal, as well as some notable thinning on the top of the barrel. The barrel band and nose cap show a light patina appearance. There is light oxidation on the shank and receiver. The base plate shows a light patina and there are nicks and scratches on the trigger guard. The screw heads show light use. The markings are deep. Overall, this rifle rates in about Very Good condition.

Our Assessment: The Type 99 sniper rifle was a Japanese sniper rifle used during the Second World War. It was a sniper version of the Type 99 rifle, chambered in the 7.7×58mm round. There were a few variations of the Type 99 sniper rifle, some with the straight bolt and the scope mounted on the left side of the receiver which allowed use of stripper clips. Another variation was one with a bent bolt and the scope above the receiver which required the sniper to load the rounds one at a time. The shorter barrel, combined with the larger caliber round made concealment more difficult than the Type 97 rifle that preceded it, considering the louder muzzle blast and flash caused by the increased powder capacity. This variant has a side mounted scope and is capable of receiving stripper clip rounds. The scope is in clean condition. This wartime service rifle will add nicely to a WWII or Military collection. Please see our photos and good luck!