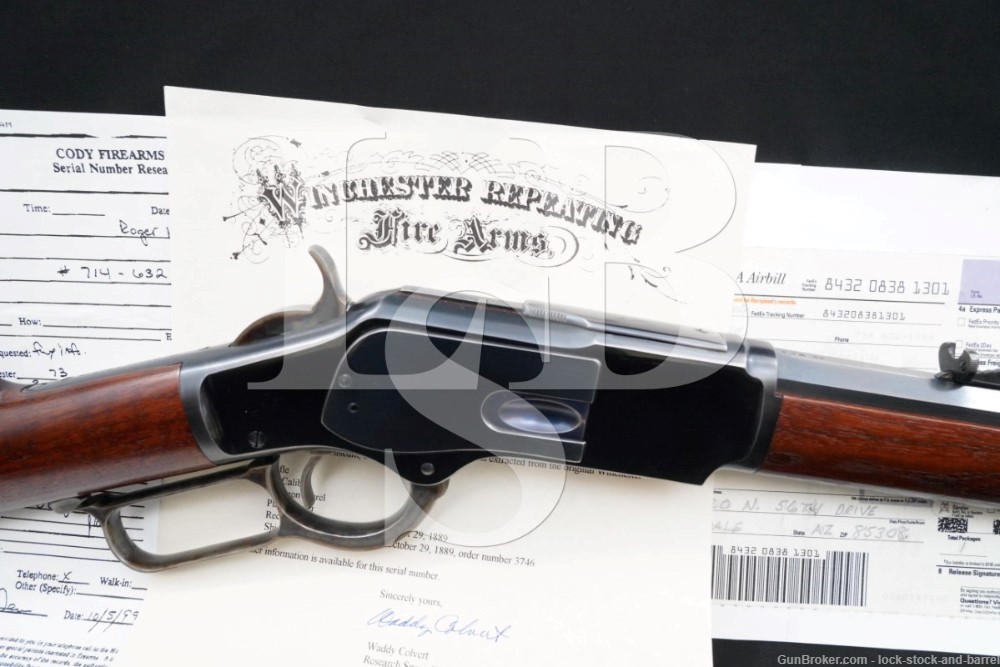 Stock Configuration & Condition: The stocks are two-piece smooth walnut with a steel forend cap, straight grip, straight comb and case-hardened steel crescent buttplate with sliding door over a storage compartment. The stocks have a few scattered minor nicks, scuffs and scratches (typical of a Roger’s restored gun, see Our Assessment). There are no chips or cracks. The LOP measures 12 5/8? from the front of the trigger to the back of the buttplate. The plate has generally strong case color with some slight muting at the heel and toe. The brass cover for the storage compartment has minor wear and has a slight patina. Overall, the stocks are in about Excellent condition as restored Antique.

Overall Condition: This rifle retains about 96% of its current metal finish. The finish is lightly thinning at most edges. There is some odd streaking on the receiver flats. The tangs have some light finish wear. There are a few scattered tiny spots of minor surface oxidation and some minor scuffs and handling marks. The action shows light operational wear. The screw heads are sharp. The markings are generally clear, the serial marking is shallow, but legible. Overall, this rifle is in Excellent condition as professionally restored Antique.

Mechanics: The action functions correctly. There is a dust cover mounted on a rail integral to the top of the receiver, typical of the 3rd Models. We have not fired this rifle. As with all used firearms, a thorough cleaning may be necessary to meet your maintenance standards.

Box, Paperwork & Accessories: This rifle comes with a four-piece cleaning rod stored in the buttstock, a Winchester Records letter from the Cody Firearms museum, and a shipping document from Roger’s Restorations. The Winchester Records letters confirm that this rifle was received in the warehouse October 29, 1889 and shipped the same day on order 3746 and the rifle was shipped as a 24″ Octagonal barrel rifle chambered for .38 WCF.

Our Assessment: One of the most successful, and certainly one of the most famous Winchester rifles was the Winchester Model 1873, known as “The Gun that Won the West” for its predominant role in the hands of Western settlers. The Model 1873 had a steel frame that was much stronger than the brass framed Model 1866, allowing Winchester to develop a family of powerful new cartridges, with Colt usually producing Single Action Army revolvers in the same calibers shortly after they were developed. The .44-40 Win. cartridge, also known as the .44 WCF, was introduced by Winchester in 1873 as Winchester’s first metallic centerfire cartridge with a number of WCF cartridges to follow including the .38-40. Colt produced single action revolvers chambered for the Winchester cartridges as well, allowing users to have a rifle and handgun which shared the same ammunition. The 1873 has a mythic status among both firearms enthusiasts and fans of the Old West in general, even inspiring the 1950 movie “Winchester ’73” starring Jimmy Stewart. This example is in absolutely exquisite condition, with vibrant case color, strong bluing, and gorgeous stocks. The quality of the restoration, as well as the attention to detail in providing a hint of wear, proper features, and even a flame-blue loading gate are all hallmarks of the man performing the work, Roger Kurtz of Roger’s Restorations. Truly an artist, Roger is known for restorations which do not make a rifle look as if it is brand-new, but rather to make the rifle appear as an extraordinarily high-condition original. He has been so successful at this that he places an unobtrusive marking on the tang of the gun, concealed by the stock, to prevent unscrupulous characters from passing off his work as a genuine original Winchester, which it easily could! This rifle is a beauty with vibrant case-color in its lever, hammer and buttplate, deep blue on the barrel, magazine and receiver, strong mechanics and a great bore. This rifle would be a wonderful addition to any collection, especially for a dedicated Winchester collector looking for a high condition gun. It deserves a spot next to its 1866, 1876, 1886, 1892 and 1894 cousins and with its bore condition, it could even still be taken out in the field. Please see our photos and good luck!