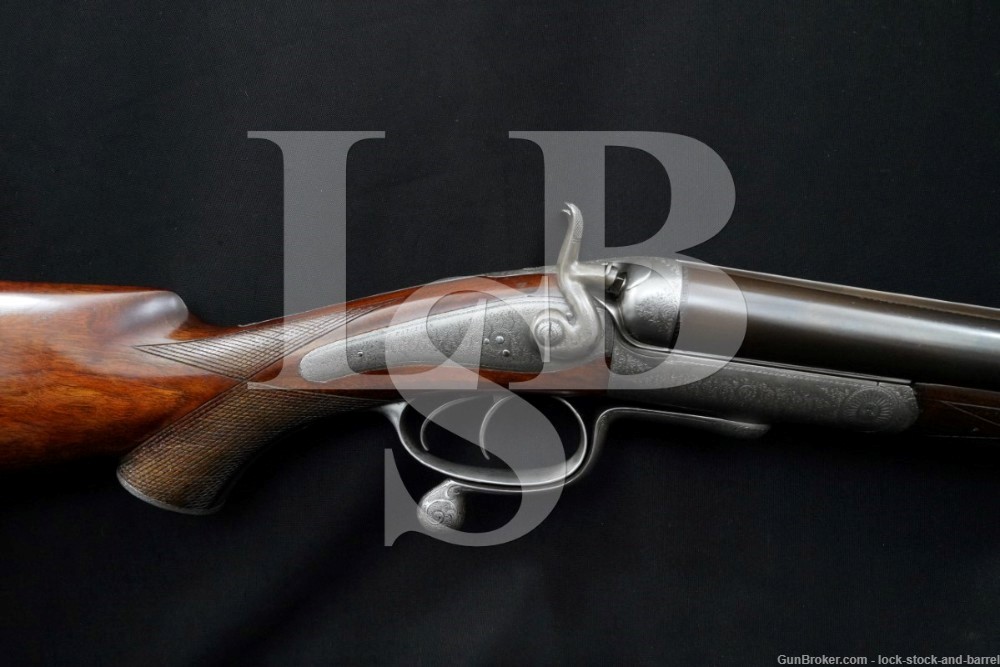 Sights / Optics: The front sight is a beaded blade in-line dovetailed to the front of the barrel’s solid rib. The rear sight assembly has a fixed “V”-notch marked “50” with a vertical platinum line aiming reference. In front of this is a taller folding “V”-notched leaf with a vertical platinum line beneath the notch, marked “100”, and one yet taller “V”-notched leaf marked “150”, without the aiming reference.

Stock Configuration & Condition: The stocks are two-piece checkered walnut with splinter forend, steel capped pistol grip, straight comb, shadow line cheekpiece, inlaid silver initial plate in the belly, brown rubber buttpad with a leather-strip cover, and sling swivel in the belly (there is also an eyelet mounted to the barrel rib in front of the forend). The stocks have minor handling wear with some scattered light nicks, scuffs and scratches, most notable at the toe. There are a few minor losses at edges, most notable at the rear of the top tang. The checkering is well defined, though there are areas around the borders where the checkering is shallow or incomplete, though the borders themselves are generally crisp and deep. There are no cracks. The LOP measures 14 3/4″ and 13 3/4″ from the fronts of the triggers to the back of the buttpad, 14″ and 13″ to the back of the wood. The stock is cast-off slightly. The pad’s cover shows wear, mostly around the edges, and the rubber is still fairly supple. Overall, the stocks are in Very Good-Fine condition as refinished or replaced Antique.

Bore Condition: The bores are light gray with well defined rifling. There is scattered minor erosion throughout the bores with infrequent minor pitting.

Overall Condition: This rifle retains about 95% of its current metal finish. The barrels’ browned finish is generally strong throughout with some minor wear on the bottom of the right barrel at the muzzle, a few scattered light nicks and scratches, thinning along the edges of the rib on the top, and some pitting under the finish which is concealed by the forend when assembled. The receiver’s coin finish shows infrequent minor discoloration from oxidation and infrequent very faint surface oxidation which has been scrubbed out. The rear of the trigger guard shows some aggressive polishing and the guard has some scattered minor surface oxidation. The action shows light operational wear. The screw heads range from sharp to lightly tool marked with strong slots. The markings are generally clear, some show light wear, but are legible. Overall, this rifle is in Fine condition as refinished Antique.

Mechanics: The action functions properly. The firing pins are rebounding, but the hammers are not. The hammers have half-cock safety notches. The barrels lock up with no play. The triggers are light and crisp. We have not fired this rifle. As with all previously owned firearms, a thorough cleaning may be necessary to meet your maintenance standards.

Our Assessment: Most frequently chambered for potent cartridges and giving the user an extremely fast and reliable follow-up shot, double rifles have long been considered the quintessential gun for safaris and dangerous game. While the use of double rifles is most associated with Africa, their production is inextricably linked to Britain. This double rifle was made by John Patstone of Southampton in the late 19th century. Patstone appears to have received a silver medal at the 1878 Exposition Universelle in Paris, though what exactly the medal was for we were not able to find. The rifle is chambered for the .577 Black Powder Express, 3 1/4″ case cartridge, a powerful round that was suitable for a variety of large game. The .577 BPE was preferred by the famous hunters Sir Samuel Baker and Arthur Henry Neumann. The rifle has been restored, so it looks great with its browned barrels and coin-finished receiver. The bores are still in pretty good shape and the action locks up tight. Whether you’re looking to go on Safari or just appreciate a finely made double rifle, this is a great one to add to any collection. Please see our photos and good luck!