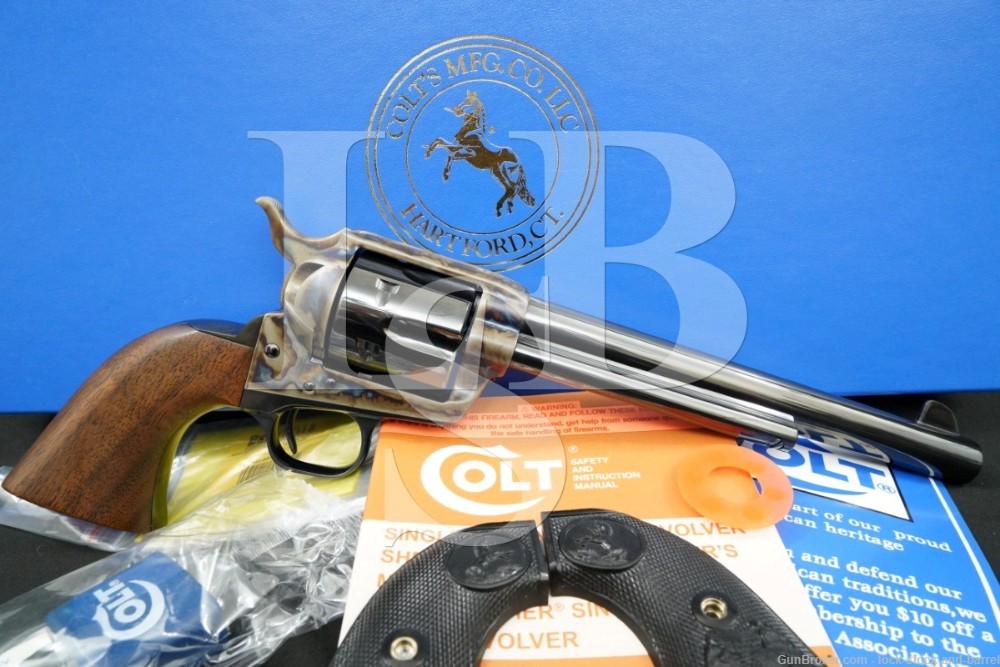 Stock Configuration & Condition: The grip is a one-piece walnut made by Paul Persinger. The grip has no notable wear or damage, only light handling marks. There are no chips or cracks. Overall, the grip is in Excellent condition.

Overall Condition: This revolver retains about 98% of its metal finish. There are a few very minor marks on the left of the frame in the flat and the recoil shield. Otherwise, there are only light handling marks. The case color is vibrant. The screw heads are sharp. The markings are clear. Overall, this revolver is in Excellent condition.

Mechanics: The action functions correctly and smoothly. The mainspring appears to have been replaced. This revolver’s cylinder has a separate bushing. The lockup produces barely perceptible play on all six chambers. The trigger is crisp. We did not fire this revolver. As with all used firearms, a thorough cleaning may be necessary to meet your maintenance standards.

-Assortment of factory paperwork including manual

Everyone should have a Colt Single Action Army, and this would be a beauty to add to any collection. Manufactured in 2007, this revolver has some “later” features which were actually re-introduced from earlier SAAs. The frame is a “black powder frame” with a screw-secured base pin and the cylinder has a removable bushing. The frame also has the early-style three-line patent marking. Chambered for .45 Colt with a 7 1/2″ barrel and a case-color hammer, this is a wonderful modern example of the SAA which shares features of the earliest 1st Generation revolvers. The gun is in Excellent condition, appearing to have seen little if any use. Its original grips are included, but it’s currently wearing a one-piece walnut grip from Paul Persinger and it appears to have had a replacement mainspring installed. This makes it suitable for addition to a collection, but is also something that could be carried as a hunting sidearm or used in Cowboy Action Shooting competitions. Please see our photos and good luck!