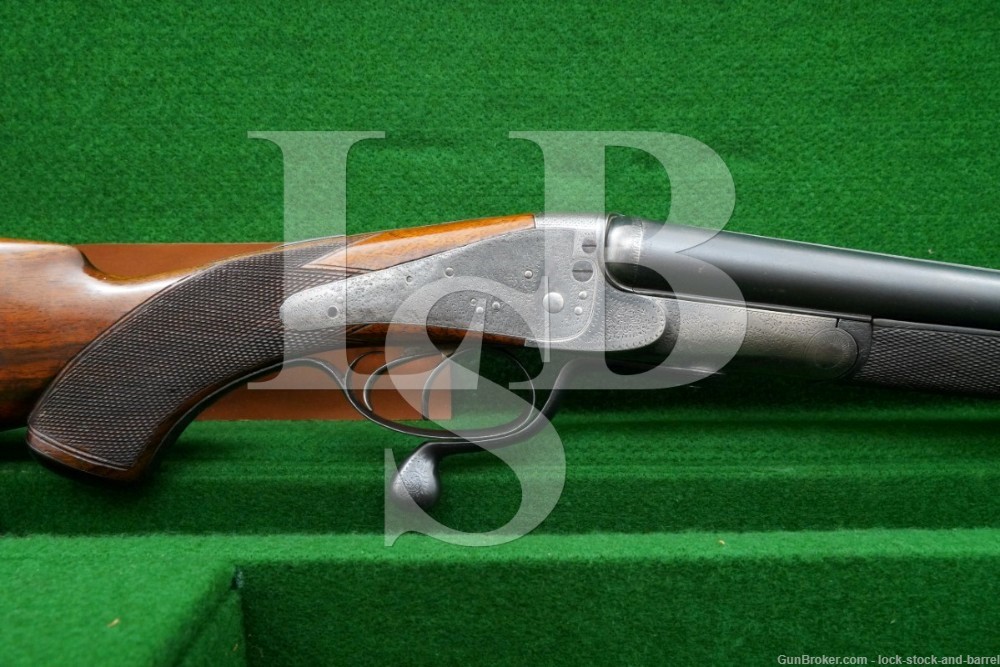 Markings: The top of the barrel rib is marked “ALEXR HENRY, EDINBURGH AND LONDON. / MAKER TO THEIR ROYAL HIGHNESS THE PRICE OF WALES AND DUKE OF EDINBURGH”. Each barrel flat is marked “AH / 5839”, “S” in oval, “38” and with British proof marks. The right lockplate is marked “??? HENRY” on banner, the left lockplate’s marking is obscured by erosion. The water table is marked “5839”, “AH” and with a British proof mark on each side. The bottom tang is marked “5839”. The receiver, lever, guard, lockplates, and exposed portions of the forend iron and lever assembly have scroll engraving.

Sights / Optics: The front sight is a beaded blade in-line dovetailed to the front of the barrel’s solid rib. The rear sight assembly has a fixed “V”-notch with a vertical platinum line aiming reference, marked “100” and “Yds” to each side of the notch. In front of this are two taller folding “V”-notched leaves with a vertical platinum line beneath each notch, marked “200” and “300”, respectively. The top of the rib is finely serrated for glare reduction.

Stock Configuration & Condition: The stocks are two-piece checkered walnut with lever-secured splinter forend, horn capped pistol grip, straight comb, shadow line cheekpiece, engraved steel buttplate, and sling eyelet in the belly (the other eyelet is mounted to the barrel rib in front of the forend). The stocks have generally light handling wear. The forend has a few notable dings around the lever, a repaired crack in the top-left near the front and a few other minor marks. The buttstock has some scattered light nicks, scuffs and scratches with a more notable ding at the sling plate in the belly. The checkering is well defined. The forend is notably darker than the buttstock. The brighter color of the buttstock and its fit to the buttplate and sling plate may indicate a replacement or restored stock. The LOP measures 14 1/4″ and 13 1/2″ from the fronts of the triggers to the back of the buttplate. The cast is about neutral. The plate has generally strong finish with scattered erosion under the finish, worn engraving, and light wear at the heel and toe. Overall, the stocks are in Very Good-Fine condition as refinished Antique.

Type of Finish: Blued, most of the receiver has been polished Bright

Bore Condition: The bores are semi-bright with strong rifling (Henry rifling, of course). There is some scattered light erosion in the bores with infrequent minor pitting.

Overall Condition: This rifle retains about 87% of its current metal finish. The barrels have generally strong finish with thinning at edges, scattered light nicks, scuffs, scratches and minor surface oxidation. The exposed portions of the receiver have been mostly polished bright with some bluing around the guard and what appears to be some original case-color showing in the water table. The receiver has minor erosion scattered throughout with some more notable erosion toward the rear of the lockplates, the erosion has been scrubbed out. The guard has scattered erosion under its new finish. The lever knob has handling wear and the action shows operational wear. The markings are generally clear or worn, but legible. Much of the receiver’s engraving is interrupted by erosion or polishing. The screw heads range from sharp to tool marked with serviceable slots. Overall, this rifle is in Very Good-Fine condition as refinished Antique.

Mechanics: The action functions properly. The barrels lock up with no play. The triggers are light and crisp. The safety does not engage automatically when opened, but does function when engaged manually. The lockplates have cocking indicators, but the lines which are used to indicate have been polished off. We have not fired this rifle. As with all previously owned firearms, a thorough cleaning may be necessary to meet your maintenance standards.

Box, Paperwork & Accessories: This rifle comes in a custom green canvas hard-sided luggage case with leather bolsters at the corners, brass latch, and English-style straps. A key for the latch lock is included. The exterior of the case shows scattered light storage wear, the interior shows minor wear from the contents.

Our Assessment: While his name is now best associated with the British Empire’s Martini-Henry rifles and carbines, Alexander Henry was a well respected Scottish gunmaker, officially appointed as maker to the Prince of Wales and Duke of Edinburgh. He was also something of a big deal in Edinburgh politics of the 19th century, being a Moderator of the High Constables, town Councilor, Justice of the Peace, admitted to the Royal Scottish Society of Arts, as well as being a Freemason. This rifle certainly showcases the quality of Henry’s work. It is a back-action sidelock hammerless gun with an interesting mechanism. The action is cocked not by the barrels rotating downward, but by the rotation of the lever which releases the barrels. The lockplates have cocking indicators, but the indicator lines were removed when the rifle was refinished. The fit and finish is still nice, the action is tight, and the gun is in quite good shape for a rifle which is more than 125 years old and looks to have seen use in the field. This rifle likely has a lot more use left in it, and chambered for .577/500 BPE, you’ll have plenty of suitable game from which to choose. Whether you’re looking to go on Safari or just appreciate a finely made double rifle, this is a great one to add to any collection. Please see our photos and good luck!