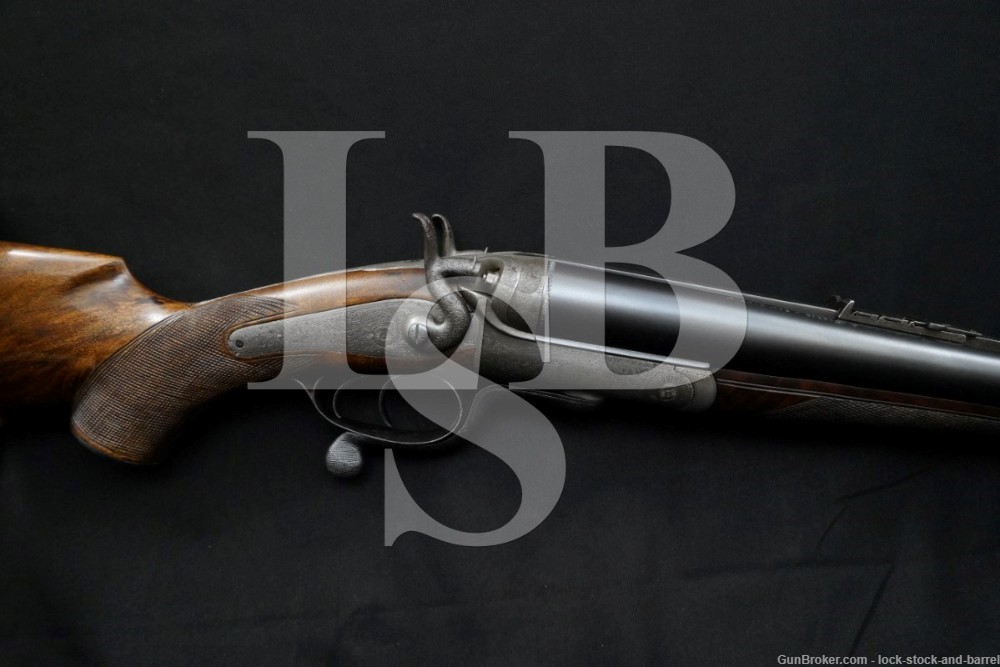 Sights / Optics: The front sight is a blade in-line dovetailed and screw-set to a base at the front of the barrel’s solid rib. Behind the front sight, the base has a large folding brass bead. The ramp on the rear of the base is textured for glare reduction. The rear sight is an express-style sight assembly with a fixed “V”-notch marked “100”, two taller folding “V”-notches marked “200” and “300” and a folding ladder-style sight with “V”-notch slider graduated from 400-1,000 yards. Each notch has a vertical platinum line aiming reference. The assembly is dovetailed to a quarter-rib at the rear of the barrels which is finely serrated for glare reduction.

Stock Configuration & Condition: The stocks are two-piece checkered walnut with splinter forend, capped pistol grip, straight comb, serrated steel buttplate, and sling eyelet in the belly, the other eyelet is mounted to the barrel rib in front of the forend. Each eyelet has a removable sling swivel installed. The stocks have some scattered minor nicks, scuffs and handling marks. There is a thin crack in the bottom-front edge of the forend. There are a few minor losses at edges around the tangs and at the forend release button. The checkering is well defined. The LOP measures 14 5/8″ and 13 3/4″ from the fronts of the triggers to the back of the buttplate. The plate has wear at the heel and toe with some scattered erosion under the finish and well defined serrations. The cast is about neutral. Overall, the stocks are in about Very Good condition.

Type of Finish: The barrels, guard and lever are Blued, the receiver assembly is In The White.

Bore Condition: The bores are light gray with strong rifling. There is minor erosion scattered throughout with some scattered spots of light-moderate pitting.

Overall Condition: This rifle retains about 87% of its current metal finish. The barrels have generally strong finish with areas of wear on the bottom of each barrel, partially covered by the forend when assembled. These worn areas show light erosion and treatment with cold blue. There is some other infrequent erosion under the finish, mostly along the edges of the rib and a few scattered minor marks. The lever has strong finish with scattered light erosion under the finish. The receiver assembly has scattered minor erosion which has been scrubbed or possibly media-blasted out, giving the bare metal a French-Gray appearance. The guard has odd wear which appears as though it may have broken and been repaired across the front mounting screw. The guard has handling wear and some light erosion. The screw are lightly tool marked with serviceable slots. The markings are generally clear, some of the engraving is slightly obscured by erosion. Overall, this rifle is in Good-Very Good condition as refinished.

Mechanics: The action functions properly. The barrels lock up with no play. We have not fired this rifle. As with all previously owned firearms, a thorough cleaning may be necessary to meet your maintenance standards.

Box, Paperwork & Accessories: A pair of snap-caps is included.

Our Assessment: Most frequently chambered for potent cartridges and giving the user an extremely fast and reliable follow-up shot, double rifles have long been considered the quintessential gun for safaris and dangerous game. While the use of double rifles is most associated with Africa, their production is inextricably linked to Britain. Alfred B. Hollis is one such maker, and appears to have gotten around the Empire quite a bit. Many of his guns are marked London, but bear Birmingham proof marks. Not to be confused with Isaac Hollis, Alfred was also appointed rifle maker to His Royal Highness the Duke of Connaught, an Irish Duchy (though the Duke would travel all across the Empire during his life), and would open a firm in Bombay to sell arms in India. This example of his work is a hammer double rifle chambered for .500/450 Express and was Cordite proofed sometime between 1904 and 1919. The rifle has been refinished, so it looks great with its age. It still has decent bores and strong mechanics, so it may also still have more trips in the field left, too. Please see our photos and good luck!