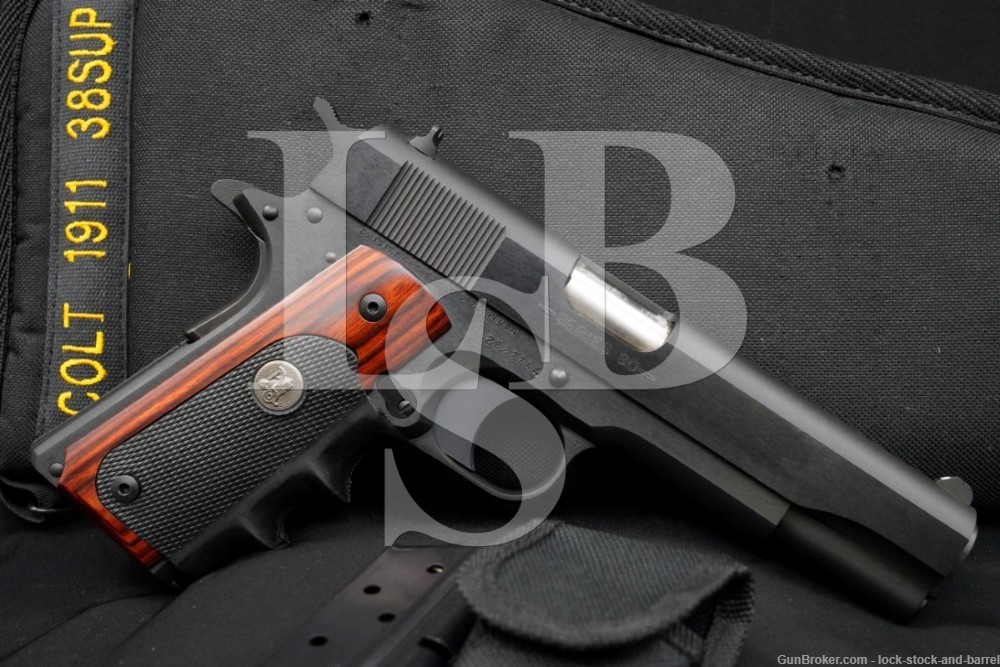 Stock Configuration & Condition: The grip is a Pachmayr American Legend with two smooth wood scales connected by a checkered black rubber wraparound section with finger grooves. The grip has minor handling wear, most notable in the finger grooves. There are no chips, cracks, rips or tears. The checkering is well defined. Overall, the grip is in Fine-plus condition as not original to the gun.

Overall Condition: This pistol retains about 98% of its metal finish. There is some faint operational wear and light handling marks. The screw heads are undamaged. The markings are clear. Overall, this pistol is in Excellent condition.

-Black nylon pouch with velcro flap for one magazine.

-Total of two 9-round Colt magazines.

Our Assessment: Colt’s 1911 served the United States military through two World Wars and several other conflicts, is still in use by some units today, and has become popular with law enforcement, competitors, and recreational shooters across the nation. The design was the end-result of a series of developments by famous gun designer John Browning, starting with the Model 1900. The advances made by Browning were revolutionary at the time, and were so successful that they are considered commonplace today. Browning not only developed first a pivoting and then a tilting barrel to allow for a locked system, he developed the concept of “the slide”, which is now synonymous with semi-automatic handguns. Having secured a contract for the US Military sidearm, Colt also offered the pistol to the commercial market as the “Government Model”. The design has seen some updates including a firing-pin block safety, higher-profile sights, and more ergonomic grips, but the basic design and fantastic trigger remain the same after more than a century. This example is a fairly recent Series 80 model chambered for the .38 Super cartridge, able to hold nine rounds in its single stack magazines. Originally developed in the 1920s, the cartridge allowed a 1911 to have a greater magazine capacity while firing a smaller caliber, higher velocity projectile. It was popular with law enforcement for its ability to penetrate car bodies and saw a resurgence in popularity due to IPSC and USPSA where it was able to “make major” while having higher capacity than comparable .40 or .45 caliber pistols. This example is in Excellent condition, appearing to have spent more time in its case than out. If you’re looking for your first 1911 or your last, this would be a good pony to add to the stable.  Please see our photos and good luck!