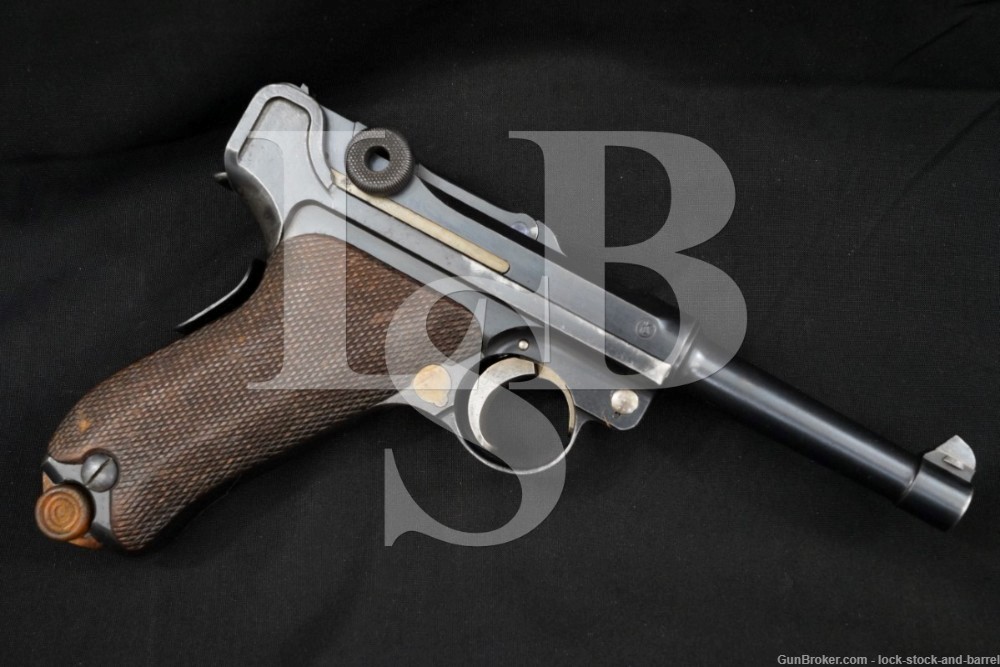 Stock Configuration & Condition: The grips are two-piece checkered walnut. The grips show handling wear and some discoloration. There are some scattered light nicks, scuffs and scratches with a more notable ding on the right panel at the bottom-rear. The checkering is generally well defined. There are no chips or cracks. The left panel’s checkering is more coarse than the right, indicating that at least one is a replacement. Overall, the grips are in about Very Good condition.

Type of Finish: Blue & Strawed, the interior is polished Bright.

Overall Condition: This pistol retains about 87% of its metal finish. The finish is thinning at most edges. The finish is thinning at all edges. There is some light wear along the left of the barrel and the right frame-rail. The straw-finished controls and the backstrap show handling wear. There are small spots of minor surface oxidation scattered throughout. There are a few light nicks and scratches. The action shows operational wear. The markings are generally clear, the proof marks are worn, likely applied before final polish and finish. The screw heads are sharp. Overall, this pistol is in Very Good condition.

Box, Paperwork & Accessories: This pistol comes with a single refinished blued magazine with wood floorplate. The crown “M” marking on the floorplate is typically associated with the German Navy, indicating that it is not original to the gun. The magazine has operational wear and scattered minor surface erosion which is mostly under the finish with intact feed lips and a strong spring.

Our Assessment: The Luger (Pistole Parabellum or P-08) is perhaps the most aesthetically and ergonomically pleasing of all autoloading centerfire pistols. It is also one of the strongest, most accurate and most recognizable service pistols ever made. Georg Luger developed his famous pistol in 1898-1899 (starting with the Borchardt/Luger transitional pistol). The Luger is, essentially, a much improved Borchardt type pistol, which was itself based on the toggle action concept used by Sir Hiram Maxim in the world’s first practical machine gun. The Luger was so reliable and well liked that it was still being made and issued to German troops well after the P38 was adopted by the army. They also saw use by the Swiss, Portugal and the Netherlands. This example is from a Dutch contract with just under 4,000 pistols delivered in 1928. It is essentially the same as other commercially produced 1906 pattern Lugers, but has the safety marking in Dutch, has the loaded chamber marking on both sides of the extractor, and a “KL” monogram marking on the right of the barrel extension, indicating it was made for the Koninklijk Nederlands Indisch Leger, the Royal Netherlands East Indies Army. These pistols are typically associated with the Dutch Air Force, though there is some more recent skepticism and belief that the order was for the KNIL in general, with only some going to the Air Force. This example has all matching serialized parts and shows operational, handling and holster wear, retaining strong mechanics and a great bore. This scarce pistol will make a great addition to a Luger collection, but would also make for a fun, historical shooter. Please see our photos and good luck!