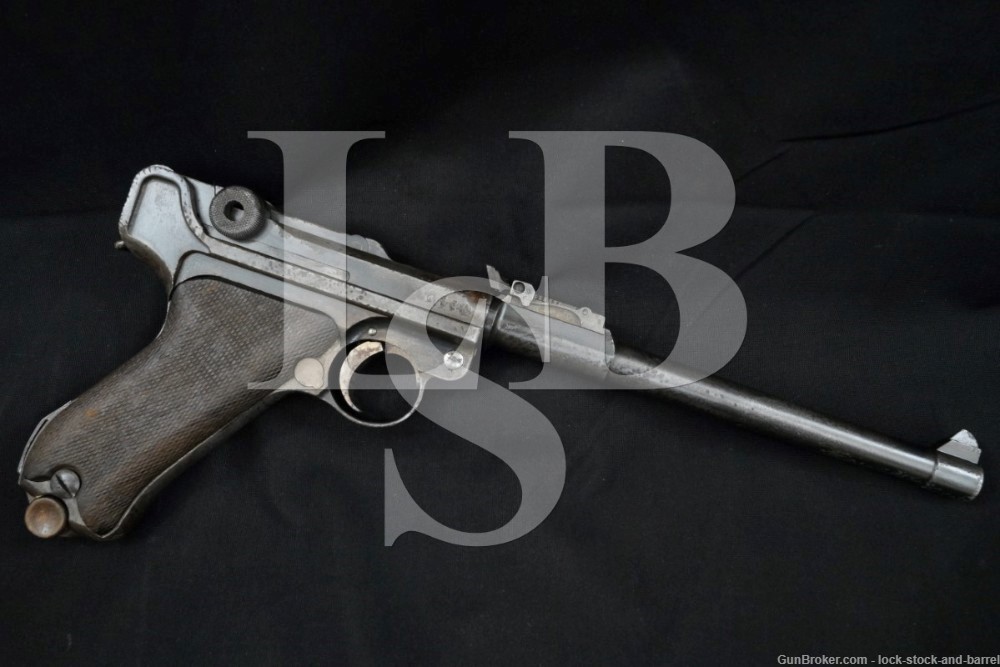 Sights / Optics: The front sight is a serrated blade dovetailed to a serrated, ramped base fixed to the muzzle. The tangent artillery rear sight is flat topped with a “V” notch and the elevator has graduated markings from 1-8. The rear sight is a “fine-tune” sight, with the notch fine-adjustable for elevation using a spanner-screw in the top-rear of the arm assembly.

Stock Configuration & Condition: The grips are two-piece checkered walnut. The grips have moderate handling wear with scattered nicks, scratches and scuffs. Some areas of the checkering are worn smooth and some areas are fairly well defined. Each panel has minor play to the frame, a little more on the right than the left. There are no chips or cracks. Overall, the grips are in about Good condition.

Finish Originality: Most remaining finish appears Original, some areas show treatment with cold blue in the distant past.

Bore Condition: The bore is mostly bright with sharp rifling. There is some scattered minor erosion with a little bit of more notable erosion in the grooves just in front of the chamber.

Overall Condition: This pistol retains about 20% of its  metal finish. Remaining finish is scattered and is generally in protected areas or around raised features. Other surfaces have worn to white or gone to a light patina. There is scattered light-moderate surface erosion and pitting, with most eroded areas bright from aggressive cleaning. There are some scattered nicks, scuffs and scratches. The action shows operational wear. The screw heads are tool marked with strong slots. The markings are generally clear with a few slightly obscured by erosion. Overall, this pistol is in about Fair-Good condition.

Mechanics: The detent spring for the takedown lever is present, but weak. When the lever is down and the sideplate removed, the lever can fall out of the receiver freely. Otherwise, the action functions correctly. The barrel assembly has no play to the frame. We have not fired this pistol. As with all used firearms, a thorough cleaning may be necessary to meet your maintenance standards.

Box, Paperwork & Accessories: This pistol comes with a single 8-round magazine with wood floorplate. The magazine has scattered light wear and minor oxidation with intact feed lips and a strong spring.

Our Assessment: This is a Long P.08 Luger, also known by collectors as the “Artillery Luger”. The model was originally issued to field artillery, airmen and fortifications. The model had a longer, 8″ barrel and was equipped with more precise sights than the standard P.08. Later, it was designated for use by Sturmtruppen and other assault forces trying to breach the trench lines. It was the first Luger to use the 32 shot Trommel or “snail” magazine. Originally produced with “Fine Tuning” front and rear sights, in 1917 DWM would eliminate the adjustment of the front sight and eventually the fine adjustment would be discontinued for the rear sight, as well. This is a nice example which was made before the rear fine tune sights were discontinued. The pistol is in Fair-Good condition, appearing to have taken its turn in the trenches. The artillery models are always collectable: they are a very interesting looking weapon that almost everyone wants to own. This example is perfect as-is for someone looking for a pistol that has “been there, done that” and with its matching serialized parts wouldn’t be the worst candidate for a restoration. It would be great in a collection of Lugers alongside its P.04 and P.08 cousins, but it also has a stronger bore than its appearance would indicate and should still make for a good shooter. Please see our photos and good luck!