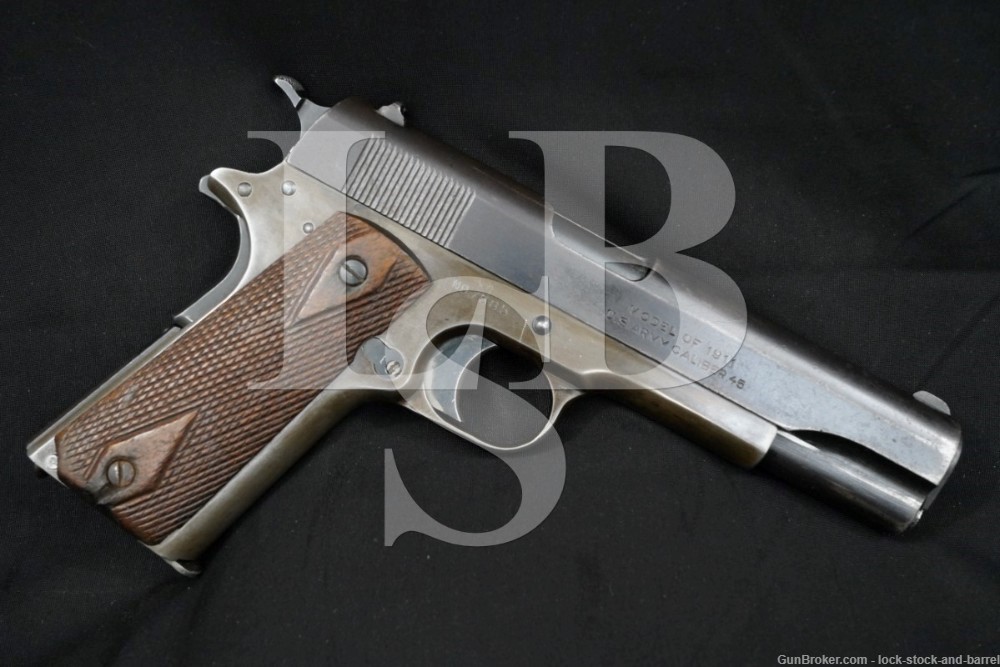 Stock Configuration & Condition: The grips are two-piece checkered walnut panels with smooth diamonds around the grip screws. The grips have light-moderate handling wear with scattered nicks, scuffs and scratches. The right panel has a crack and a chip loss at the bottom edge below the grip screw. The checkering is generally well defined. Overall, the grips are in about Good condition.

Note: Both of the left panel’s grip screws and the bottom-right grip screw are seized in their bushings. Turning these screw heads turns the bushing in the frame rather than turning the screw in the bushing. The bushings’ threads show some wear, but are still strong. The frame has strong threads for these bushings. The top-right screw functions properly in its bushing, but based on condition is a replacement.

Bore Condition: The bore is gray. The rifling is worn, but visible. There is light-moderate erosion and some minor pitting scattered through the bore.

Overall Condition: This pistol retains about 50% of its metal finish. The finish is thinning at all edges. The finish is generally strong on the slide with some strong finish on the left of the dust cover. Most of the rest of the frame shows old, worn cold-blue with some areas gone to a light patina. The slide has some scattered light surface oxidation. There is infrequent minor surface erosion. There is some more notable surface erosion in the mainspring housing. There are scattered nicks, scuffs and scratches, including an “idiot mark” under the slide stop. The action shows operational wear. The screw heads are tool marked with serviceable slots. As noted above, both of the left panel’s grip screws and the bottom-right grip screw are seized in their bushings. Turning these screw heads turns the bushing in the frame rather than turning the screw in the bushing. The markings are clear. Overall, this pistol is in about Good condition.

Box, Paperwork & Accessories: This pistol comes with one two-tone 7-round magazine with the baseplate pinned in place with the body extending down flush with the bottom edge of the floorplate and “L” marked on the top of the floorplate. The magazine has scattered finish wear, most showing old treatment with cold blue, some minor surface erosion, intact feed lips and a strong spring.

Our Assessment: The outbreak of The Great War saw every major European power scrambling for any and all arms they could lay their hands on. This demand caused the expansion of military arms production in America, despite not having entered the war. In addition to expanding their existing facilities, Remington UMC made entirely new factories in New Jersey and Vermont just to supply ammunition to the Russians and French, respectively. In 1915, Remington completed what was, at the time, the largest factory complex in the entire United States, a 1.6 million square foot factory spread over 75 acres solely to supply the Russian Empire with M1891 rifles and bayonets. As Russia descended into revolution, America entered the war, and the facility was turned over to producing Browning .50 caliber machine guns, flare pistols, and Model 1911 pistols. Bringing 1911 production online was easier said than done as Colt apparently didn’t have any drawings for the design, and never did supply Remington with sets of master gauges. Colt supplied a first set of drawings, but they only included nominal dimensions with no indication of tolerances. A second set of drawings was supplied later, and found to have 430 discrepancies when compared with the first set! Remington proceeded to find five military issue Colt 1911s which had satisfactory parts interchangeability and produced their own drawings by measuring every part and setting the nominal measurements as the average and the tolerances as the extremes. This is certainly not the ideal method of starting production, but Colt wasn’t helping and there was a war on! Remington UMC had originally received a contract for 150,000 pistols, later increased to 500,000 in March 1918. At this time, it was thought that the war could go on for years, the Germans launched Operation Michael in the same month this order was increased. Instead, the Germans were pushed back to the Hindenburg line, that line was breached, and the Armistice was signed in November. The result was that Remington UMC produced only 21,676 Model 1911 pistols. The manufacturing equipment was transferred to Springfield Armory, and was later distributed to various manufacturers during WWII to produce 1911A1 pistols. This example of a Remington UMC 1911 is from fairly early in production, serial 7585. It has the early-style two-line marking on the right of the slide as well as proper inspection marks on both the slide and frame. This example appears to have seen service and having since been refinished. Given the small quantity produced, any Remington UMC 1911 would make a great addition to a 1911 collection. This one will take a prized place in a collection as it is and would be a good candidate for restoration. Please see our pictures and good luck in your bidding!