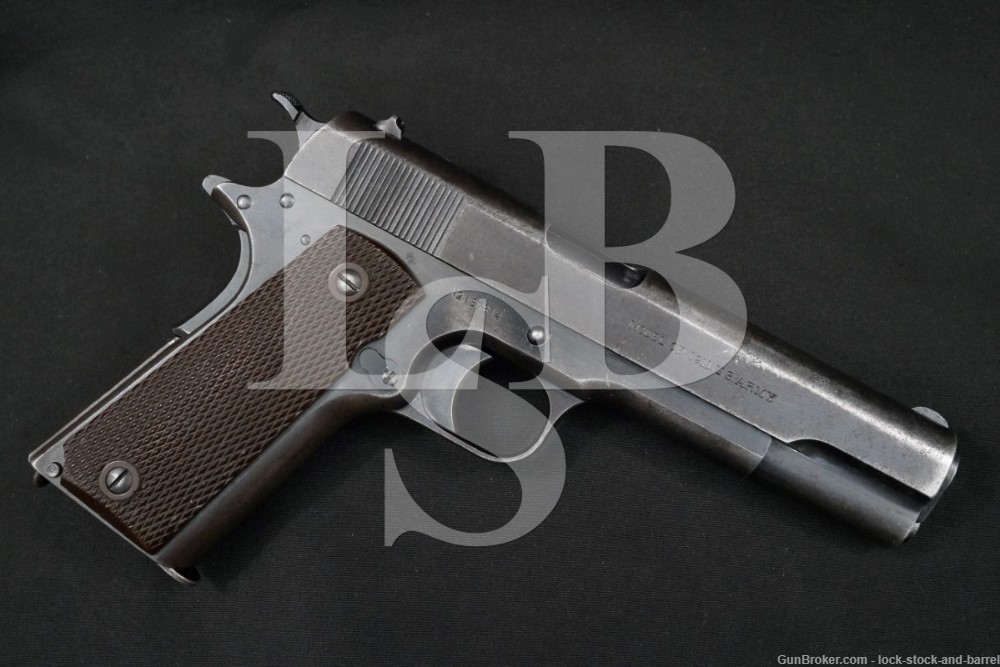 Sights / Optics: The front sight is a short rounded blade. The rear sight is a “U” notch dovetailed into the slide. Each sight has nicks on their top edges.

Stock Configuration & Condition: The grips are checkered brown plastic with reinforcement rings around the grip screws and reinforcement ribs on their interior. The grips show minor handling wear with some light tool marks around the screw holes and a few other small marks. The checkering is well defined, generally sharp. There are no chips or cracks. The grips rate in Fine condition as not original to the gun.

Finish Originality: Despite the refurbish mark, the finish appears Original to the parts. The barrel and grips have been replaced and there may have been other small parts replaced. The slide and frame retain strong markings, the grain of the finish on the frame shifts below the level of the magazine catch, typical of WWI finishing, and the “A A” marking appears to have been struck through the finish.

Overall Condition: This pistol retains about 50% of its metal finish. The finish is thinning at all edges. There is scattered finish wear, most notable in the top and flats of the slide and in the grip areas of the frame. Strongest finish is in the frame flats, barrel, and the scallops on the sides of the slide in front of the dust cover. The worn areas show discoloration from oxidation, there is scattered light surface oxidation and infrequent surface erosion. There are some scattered nicks, scuffs and scratches including a minor “idiot mark” under the slide stop. The action shows operational wear. The screw heads are tool marked with strong slots. The markings are clear. Overall, this pistol is in Good-Very Good condition as Arsenal Refurbished.

Mechanics: The action functions correctly. The trigger pull is crisp. The slide has barely perceptible play to the frame. We have not fired this pistol. As with all used firearms, a thorough cleaning may be necessary to meet your maintenance standards.

Box, Paperwork & Accessories: This pistol comes with one blued 7-round magazine marked “S” on the top of the floorplate and “C-S” on the bottom (WWII Scovill sub-contract for Colt). The magazine has operational wear, some minor oxidation, intact feed lips and a strong spring.

Our Assessment: The 1911 and 1911-A1 pistols served the military of the United States from 1911 to 1985, through two World Wars and the Korean and Vietnam wars. They gained a reputation as a reliable handgun with plenty of stopping power, and are held in high regard by those who have used them. The design was the end-result of a series of developments by famous gun designer John Browning, starting with the Model 1900. The advances made by Browning were revolutionary at the time, and were so successful that they are considered commonplace today. Browning not only developed first a pivoting and then a tilting barrel to allow for a locked system, he developed the concept of “the slide”, which is now synonymous with semi-automatic handguns. This is a Colt Model 1911 that was made during WWI in 1917. The pistol was refurbished by Anniston Arsenal, but it must have been in good shape as the slide and frame appear to still have their original blue finish, with the most notable replaced parts being the barrel and grips. The pistol’s brushed blue finish that was instigated in 1917 because the Army thought the original bright blued finish was not durable enough. The pistol is in Good-Very Good condition with 50% of its finish remaining. The bore is fairly strong with scattered light erosion. This is a pistol which has honest wear consistent with an issued sidearm in one of the most destructive conflicts in history, and will make a nice addition to a 1911 specific collection. Please see our photos and good luck!