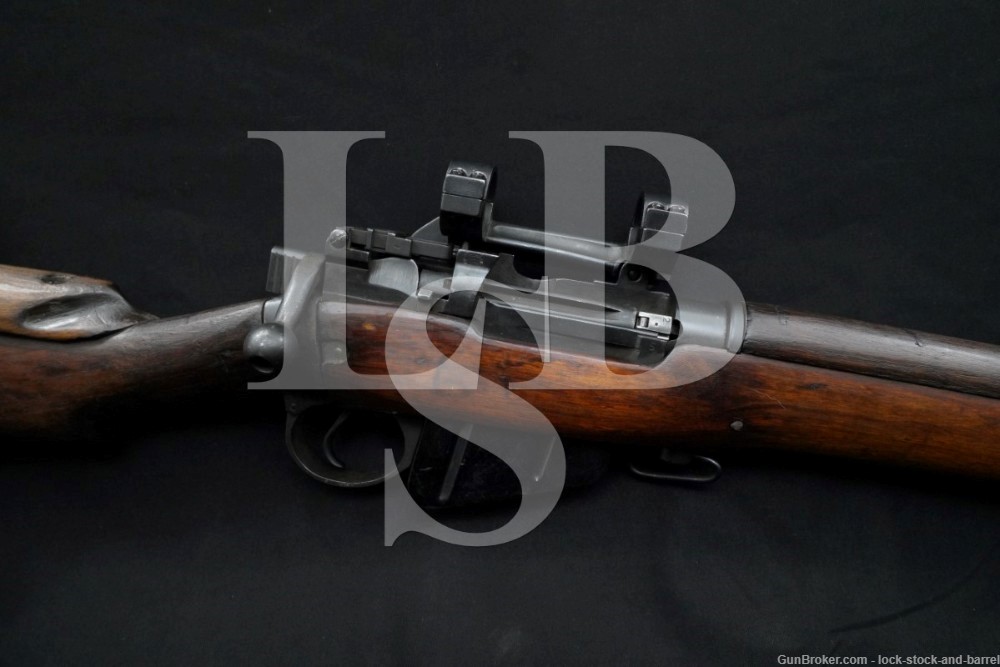 Sights / Optics: The front sight is a blade set between two protective ears. The rear flip up sight ladder normally uses a fixed aperture in the down position. The aperture was removed inorder to mount a scope. The rear sight flips up to become a sight ladder that is marked from “2 – 13”.
The left side of the receiver has two threaded holes for accepting the scope base assembly. The No. 32 scope base assembly uses 2 screws with oversized heads and has integral rings. The small screw heads show heavy use. One of the 4 small scope ring screws is missing. The base shows small scrapes & small scratches. Overall the scope bae assembly is in about Very Good Plus condition.

Stock Configuration & Condition: The hardwood stock has a straight grip with finger groove, raised cheek piece, 2 nose caps, 2 barrel bands, 2 sling loops and a metal buttplate with hinged door for storage. The buttplate and stock hardware show scrapes & small scratches. The buttplate also shows some oxidation. The raised cheek piece is secured by two screws. The rear handguard shows a long repaired crack. The wood shows several scarpes, scratches and compression marks. Some have damaged small portions of the surface wood. These marks have been oiled over. The LOP measures 13 ½ inches from the front of the trigger to the back of the buttplate. The stock rates in about Very Good Plus overall condition as refurbished.

Bore Condition: The muzzle & grooves are grey. The rifling is deep. There is erosion in the grooves and at the muzzle.

Overall Condition: This rifle retains about 92% of its current metal finish as refinished. The metal shows scrapes, small scratches, and a few areas of discoloration. The barrel & receiver shows a few small spots of light surface erosion. The stock collar shows a freckling of light surface erosion. The screw heads show heavy use. Some of the receiver markings are faded. Overall, this rifle rates in about Very Good condition, as refinished.

Box, Paperwork & Accessories: The rifle has a No. 32 scope base assembly attached; see above. The rifle comes with a 10-round magazine that shows scrapes, scratches, and a patch of surface erosion. It is in about Very Good condition.

Our Assessment: This Enfield No.4 Mk1 T Sniper Rifle started out as an Enfield No.4 Mk1 made at BSA Shirley during WWII. It was selected for its inherent accuracy and then upgraded to sniper configuration by Holland & Holland. The rifle was eventually imported into the U.S. and is marked accordingly on the barrel. The rifle comes with a No. 32 scope base assembly. This is a good looking No4 MkI that just needs a No. 32 scope to return it to its No4 MkI (T) Sniper configuration.