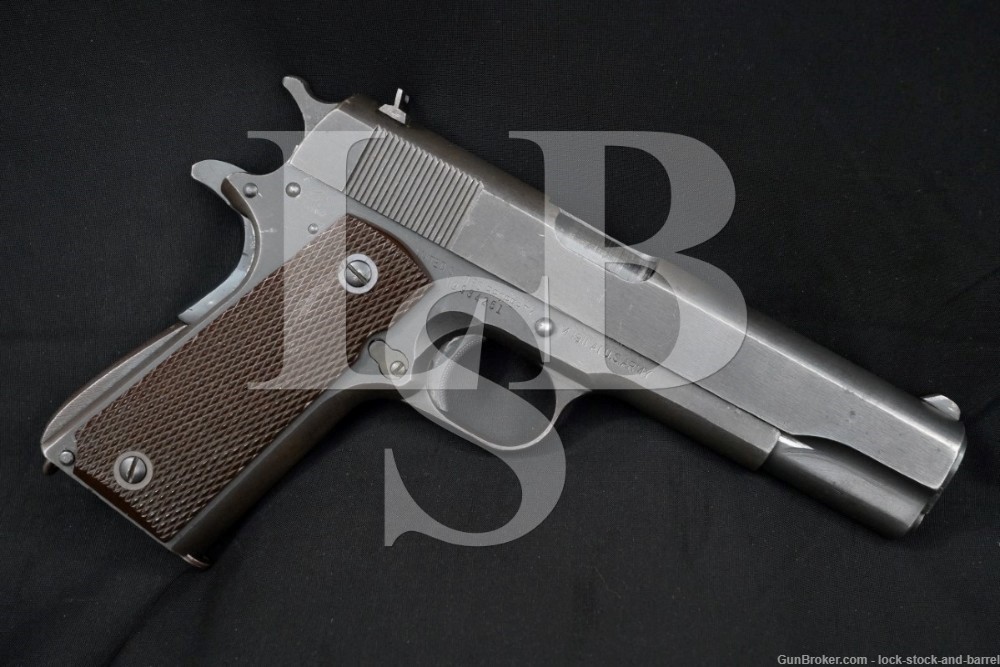 Stock Configuration & Condition: The grips are checkered brown “Coltrock” plastic with large reinforcement rings around the screws and reinforcement ribs on the inside. The grips have minor handling wear. There are a couple of spots of damaged checkers, one on the right panel below the top grip screw and one on the left panel above and behind the bottom grip screw. The top-right ring has a scratch which lines up with the damaged checkers below. There are a few other scattered minor marks. There are no chips or cracks. The checkering is generally sharp. Overall, the grips are in Very Good-Fine condition as not original to the gun.

Finish Originality: Most finish appears original. The grip safety appears to be replaced or refinished and there is some discoloration around the rear sight dovetail, possibly indicating that it has been modified for the installed rear sight.

Bore Condition: The bore is semi-bright. The rifling is well defined, generally sharp. There is some scattered light erosion in the bore and infrequent minor pitting.

Overall Condition: This pistol retains about 85% of its metal finish. The finish is thinning at all edges. Most of the balance is in handling wear in the grip areas and normal operational wear. The worn areas show some discoloration from oxidation. The top of the slide has some scattered light surface oxidation, the top-rear edges of the slide have a few nicks and there is a notable scratch on the top-left of the slide between the rear sight and ejection port. There are some other scattered minor nicks, scuffs and scratches with a few other spots of minor oxidation. There is an “idiot mark” under the slide stop with a slight continuation above the front of the trigger guard. There is some discoloration around the rear sight dovetail, possibly indicating it was modified for the currently installed rear sight. The screw heads are tool marked with serviceable slots. The markings generally clear, the Ordnance wheel is incomplete (as is common). Overall, this pistol is in about Very Good condition.

Box, Paperwork & Accessories: This pistol comes with a single 7-round magazine, marked “R” on the top of the floorplate (Ridson Mfg. Co.). The magazine has scattered light wear, infrequent minor erosion, and scattered light surface oxidation, most notable on the floorplate, with intact feed lips and a strong spring.

Our Assessment: The 1911 and 1911-A1 pistols served the military of the United States from 1911 to 1985, through two World Wars and the Korean and Vietnam wars. They gained a reputation as a reliable handgun with plenty of stopping power, and are held in high regard by those who have used them. As was the case at the outset of the 1st World War, demands of the US Military would outstrip the production capacity of Colt when the United States entered World War 2. In this case, contracting pistol production out to other companies had been planned for and simplified due to educational orders and a production study, notably conducted by the Singer sewing machine company, which developed comprehensive plans and instructions for a company which had never made a 1911A1 to order materials, machinery and set up manufacturing for the pistol. Remington Rand was the star example of this project’s success, and by the end of the war would go on to produce just about as many as all of the other maker’s combined, at the lowest price and highest quality. This example was made by Remington Rand in 1943, fairly early in their production. It has an interesting mix of features including the early Du-Lite finish, first-style serial marking and second-style slide marking. The installed barrel’s markings indicate that it was made during WWI or during the interwar years, but in early production Remington Rand received barrels from both Colt and Springfield Armory, so it is not impossible that the barrel was installed at Remington Rand. The pistol has had Coltrock grips installed and its sights have been replaced, but it is otherwise a nice example of a Remington Rand 1911-A1. The pistol is in Very Good condition, retaining about 85% of its finish, a shootable bore and strong mechanics apart from the loose front sight. This would make a nice addition for a collector, and returning it to correct configuration shouldn’t be too difficult, but it could also prove to be a great shooter. Please see our photos and good luck!