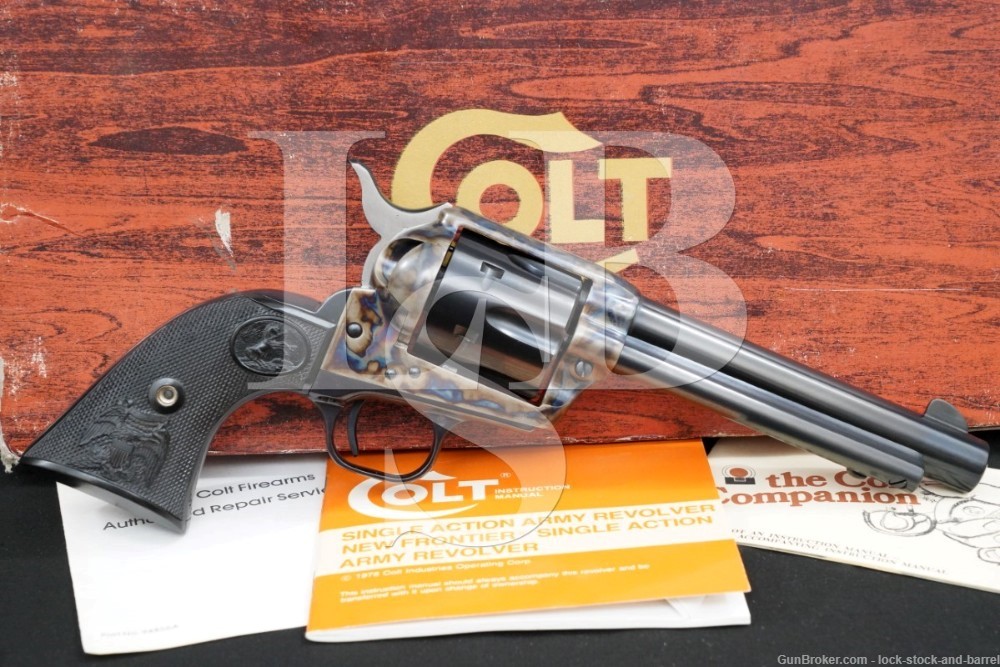 Overall Condition: This handgun retains about 98% of its metal finish. There are a few minor nicks, most notable toward the top of the backstrap. The frame has a few minor voids in the case color, most on the left flat. The cylinder has very faint turn-wear, mostly not through the finish. The trigger guard assembly has a slight plum hue. There is scattered oxidation on the mainspring, concealed when the grips are installed. The screw heads are sharp. The markings are clear. Overall, this handgun rates in Fine-Excellent condition.

Mechanics: The action functions properly. The cylinder locks up with no play on each chamber. We did not fire this handgun. As with all used firearms, a thorough cleaning may be necessary to meet your maintenance requirements.

Box, Paperwork & Accessories: This revolver comes in a faux-wood cardboard Colt box with two-piece styrofoam insert and an assortment of factory paperwork including manual. The box has scattered wear and tearing at the ends with both large ears missing, three of the four large ears torn off, one of the small ears is included separate from the box.

Everyone should have a Colt Single Action Army, and this would be a beauty to add to any collection. Manufactured in 1979, this revolver is in Fine-Excellent condition, appearing to have seen gentle use. With a 5 1/2″ barrel and chambered for .357 Magnum, this is a classic Single Action Army chambered for a more modern magnum cartridge. Its high condition makes it suitable for addition to a collection, but is also something that could be carried as a hunting sidearm or used in Cowboy Action Shooting competitions. Please see our photos and good luck!