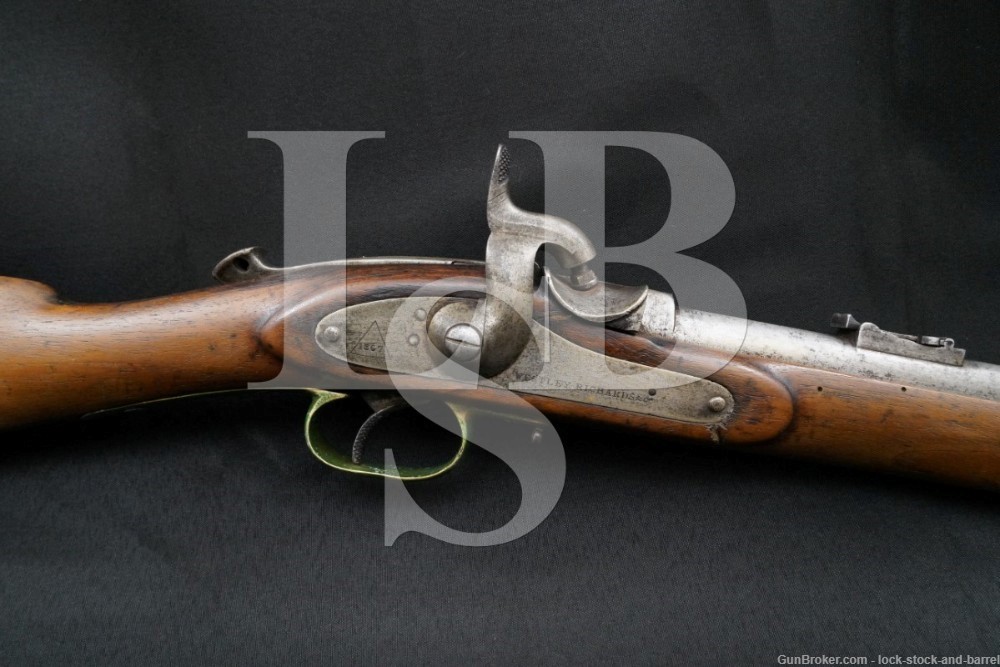 Sights/Optics: The front sight is a blade integral to a rectangular base that is fixed to the barrel. The rear sight is a flip up sliding escalator that is a v-notch in both configurations.

Stock Configuration and Condition: The stock is a one-piece smooth wood with forend cap, ram rod groove (ram rod included), forward barrel band/bayonet lug, straight grip, straight comb, and brass buttplate. There are sling swivels on the belly of the buttstock and on the barrel band. Light nicks, dings, and scuffs can be seen throughout the wood. At the ends the wood is stained dark. The LOP measures 13 1/2” from the front of the trigger to the back of the buttplate. The plate has light nicks and dings throughout. Along with the guard, the plate has extensive verdigris. Overall, the stock rates in Good condition, as antique.

Bore Condition: The bore is only semi-bright with well-defined Whitworth patent polygonal rifling. There are spots of light erosion dotted throughout, and moderate stubborn fouling throughout.

Overall Condition: This rifle retains about 0% of its metal finish. The barrel has gone to white, and has spots of light surface oxidation throughout along with light dings. The breech and breech lock have light surface oxidation throughout. The screw heads are lightly tool marked with strong slots. Markings are clear. Overall, this rifle rates in Good condition, as antique.

Mechanics: The action functions partly correctly. There is a crack in the detent rationing spring just forward of the breech lock. We have not fired this rifle. As with all used firearms, thorough cleaning may be necessary to meet your maintenance standards.

Box, Paperwork, and Accessories: The ram rod mentioned above.

Our Assessment: On offer here is the storied Monkey Tail rifle made by Westley Richards of Britain. We’re somewhat convinced this example is the Portuguese contract version, given the bayonet lug seen on the barrel band. What makes us question this is the lack of a sling swivel on the guard, but rather there is on the belly of the buttstock, which, as far as we’re aware, wasn’t standard on any version. In either case, this is a rare rifle type worth seeking out. This rifle pattern was in its time highly regarded, and prior to its use in South Africa, other versions were used by all manner of shooters and riflemen. This example is in overall Good condition for an antique. While most of the finish is gone, the build is still strong, and mechanically, things seem quite good. This is a highly sought-after rifle, so do not miss out! Good luck and happy bidding!