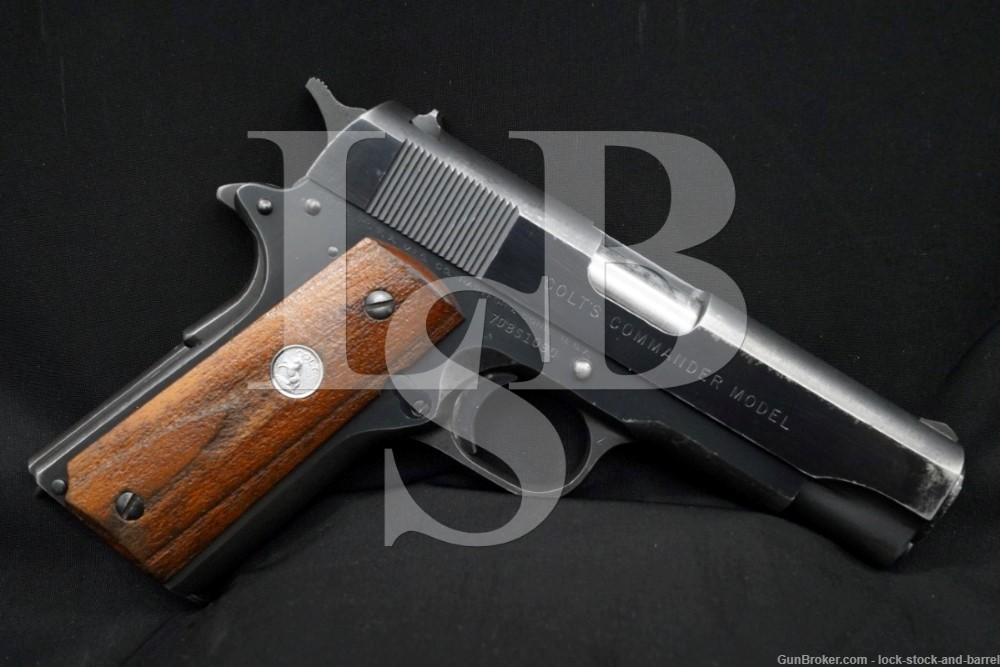 Stock Configuration & Condition: The grips are two-piece smooth wood with silver-colored Colt medallions. The grips have light-moderate handling wear with some thinning finish and discoloration from age and handling. The most notable wear is below the medallion on the right panel and some of the grain-lines are quite deep. There are some other scattered light marks, but there are no chips or cracks. Overall, the grips are in Good-plus condition.

Bore Condition: The bore is mostly bright and the rifling is sharp. There is some light erosion and some stubborn fouling along the edges of the grooves.

Overall Condition: This pistol retains about 75% of its metal finish. The finish is thinning at all edges and lightly thinning in the matte finished portions of the slide and frame. There is some more notable wear at the right-front of the slide and handling wear in the grip areas. There are scattered spots of minor surface oxidation with some minor erosion along the top edges of the slide flats. The action shows operational wear. The screw heads are strong and the markings are clear. Overall, this gun rates in about Very Good condition.

Mechanics: The action functions correctly. The slide has light play to the frame. The trigger is crisp. This pistol does not have a firing pin block safety. We did not fire this pistol. As with all used firearms, a thorough cleaning may be necessary to meet your maintenance standards.

Box, Paperwork & Accessories: This pistol comes with a single 9-round magazine, marked on the floorplate with a rampant colt logo, “COLT / CAL 9MM LUGER” and “M”. The magazine has minor operational wear with intact feed lips and a strong spring.

Our Assessment: Introduced by Colt as a lighter-weight version of the 1911, the smaller size of the Commander was popular and soon they were offered in a number of variations including different frame materials and calibers. While the original development centered on an aluminum-frame 9mm as a candidate for US Military post-war officer’s pistols, the design would soon become popular with law enforcement officers and on the commercial market as a self-defense pistol. This example is a fairly interesting Commander as it is a very early example of the “Combat Commander”, which used a steel frame instead of an alloy frame. Much like the early Gold Cup National Match pistols were not marked “Gold Cup”, the earliest Combat Commanders were assembled using standard Commander slides, without the word “Combat” marked on them and with the lightening cuts of the original Commander models. Chambered for the 9mm Luger cartridge, this early Combat Commander is able to accept 9-round flush-fit magazines, giving a significant increase in capacity to the usual 7-rounds of a .45, and typically has widely available ammunition at a reasonable price. It would make for a great carry pistol and as one of the early “Combat” Commanders, it is equally suited to a Colt or 1911 collection. Please see our photos and good luck!