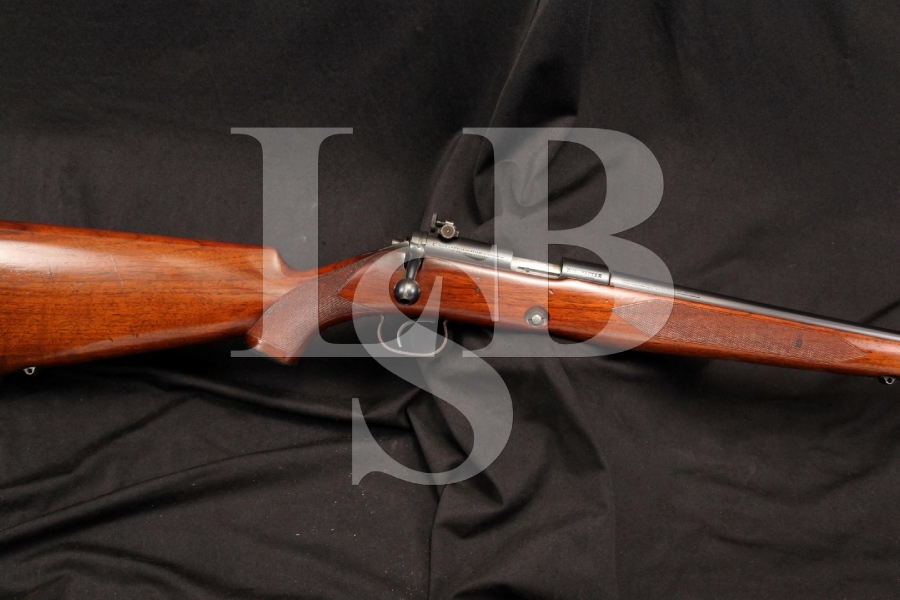 LSB#: 130917MR17 Make: Winchester Model: 52 Sporter Serial Number: 36358 Year of Manufacture: 1936 Caliber: .22 Long Rifle (.22 Short and Long Rifle will chamber and shoot but not feed through the magazine) Action Type: Bolt Action with Removable Magazine Markings: The left side of the barrel is marked “Winchester / Proof Steel”, “Model 52”, “Winchester / Trade Mark”, “22 LONG R” and with a circled “WP” proof mark. The left side of the receiver is marked with a circled “WP” proof mark and “36358”. The right side of the receiver at the chamber is marked “Winchester / Trademark”. The tang in front of the trigger guard is marked “SPORTING”. The right rear of the receiver is marked “-U.S.A. Patents – 1323064-1323065- / 1324493-1331154-1335440-1741281”. The right side of the barrel is marked “Made In U.S.A. Winchester Repeating Arms Co. / New Haven, Conn.” Barrel Length: The round barrel is 24” in length. Sights / Optics: The front sight is a hooded silver colored bead dovetailed into a stippled ramp on the barrel. There is no provision for a rear sight on the barrel. There is a Lyman aperture sight (#48?) mounted on the left side of the receiver that is adjustable for windage and elevation with scales for each. The left side of the sight has a Lyman logo and the top rear is marked “Lyman / Reg. U.S.Pat.Off”. The sight is complete with an aperture that has an outside diameter of about 11/16”. The knobs offer click adjustments for windage and elevation with scales on the left side and top front of the sight. The windage knob works correctly, but the elevation knob doesn’t move the sight either up or down. Stock Configuration & Condition: The one piece stock is checkered walnut with a satin finish. It has a pistol grip with a black hard rubber grip cap marked “Winchester Repeating Arms Co.” and flat shotgun style blued checkered steel buttplate. The buttstock has a cheekpiece and there are sling swivel bases mounted at the butt and on the forend, which has a black hard rubber tip. The forend is checkered on the sides and with three diamond patterns on the underside. The stock shows handling marks and light compression marks with a few deeper marks on the right side at the butt, in front of the bolt handle and at the ejection port. The checkering shows light to moderate wear with no significant mars. The wood to metal fit is good and there are no cracks noted. The LOP measures 13 5/8” from the front of the trigger to the back of the buttplate, which shows thinning, light wear in the checkering and two spots of erosion on the left edge. The buttplate and the stock are both in about Very Good overall condition. Type of Finish: Blue Finish Originality: All Original Bore Condition: The bore is bright and the rifling is sharp. There is no erosion. Overall Condition: This rifle retains about 85% of its metal finish. The front sight hood shows surface loss on its front and rear edges. The barrel shows a few handling marks with a spot of pitting about 3” behind the front sight and a small spot of pinprick surface erosion 4” behind the front of the forend. The front of the receiver at the chamber also shows a few light handling marks. The bolt knob and trigger guard show thinning, and the trigger guard has developed a light brown patina. The screw heads are sharp but show marks of a screwdriver. The markings are clear. Overall, this rifle rates in about Very Good to Fine condition. Mechanics: The action functions correctly. We have not fired this rifle. Box, Paperwork & Accessories: This rifle comes with one 5-round blued magazine marked “Made In U.S.A. / Winchester / Trade Mark / PAT. NOV. 25, 1919” on the floorplate. It shows light wear on the sides and thinning on the floorplate. It is in about Very Good condition. Our Assessment: From Wikipedia: “The Winchester Model 52 was a bolt-action .22-caliber target rifle introduced by the Winchester Repeating Arms Company in 1920. For many years it was the premier small-bore match rifle in the United States, if not the world. Known as the “King of the .22’s,” the Model 52 has been called by Winchester historian Herbert Houze “perfection in design”…The Model 52 was finally discontinued in the 1980’s because it was costly to manufacture and its popularity had lost way to expensive European rifles.”. This is the Sporter version of the Winchester Model 52 rimfire bolt action rifle that was made in 1936. It has the same action as the target version, but with a thinner barrel and a sporter style stock. The metal retains about 85% of its original finish, with only a few marks in the barrel and receiver, but thinning on the trigger guard with a light patina forming. The bore is bright with no erosion. It is equipped with what we think is a Lyman #48 aperture sight. There may be something we don’t understand, but the elevation knob doesn’t raise or lower the sight, although the windage knob operates correctly. Winchester didn’t make a lot of the Model 52’s in the Sporter model, so this rifle should be of great interest to Winchester collectors. Please see our pictures for finer detail than we can give you here. It is also will make a nice shooter with its bore, and be great for hunting rabbits and other small game and varmints.