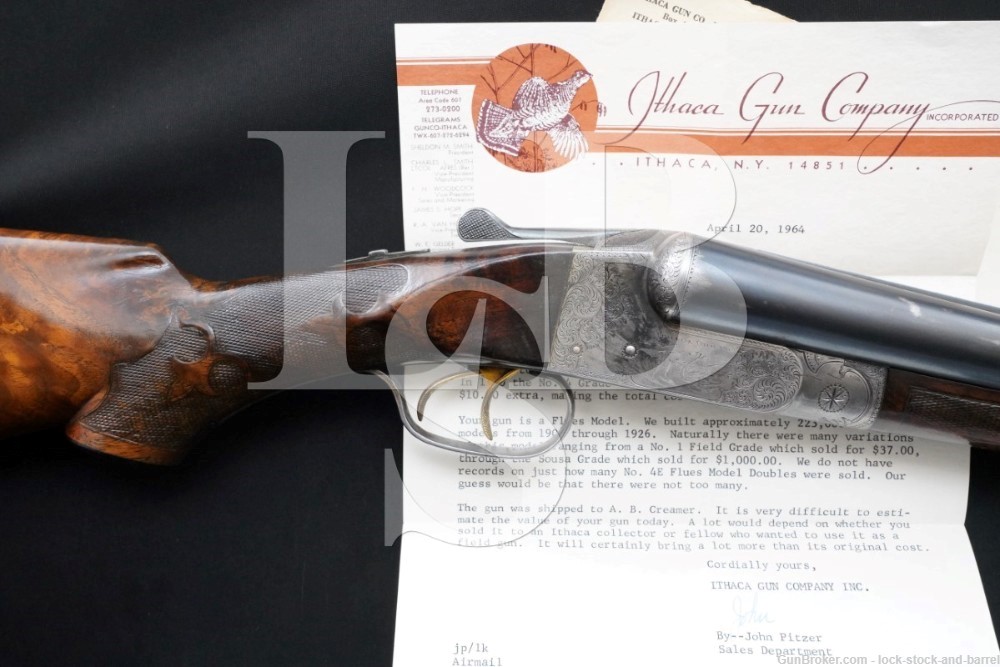 Sights / Optics: This shotgun is mounted with a white bead at the front of the rib and a smaller white mid-bead. The top of the rib is serrated and checkered for glare reduction.

Stock Configuration & Condition: The stocks are a two piece checkered select walnut set. The splinter forend has an inlaid ebony tip. The buttstock has a capped pistol grip, straight comb, ventilated orange rubber White Line recoil pad and an inlaid gold initial plate engraved “ABC” in the belly. The most notable wear is in the forend at the left- and bottom-rear where the wood is dark, the surface is uneven and there are a couple of tiny losses at the top edge. There is a thin crack in the top-front of the forend at the right-front of the ebony tip, mostly concealed when assembled. The forend has scattered nicks, scuffs and scratches, nearly all finished over. Some parts of the forend’s carving pattern are visible and there are areas where the checkering is still well defined. Other areas of the forend checkering are shallow, but visible or worn smooth. The buttstock has lighter wear with no chips or cracks. The buttstock has some scattered nicks, scuffs and scratches with some crazing or what looks like wrinkles in the finish toward the rear. There is some discoloration in the wrist where the wood meets the metal and in handling areas and there is a more notable scratch across the left-side wrist checkering. The wrist checkering is more well defined than the forend with the fleur-de-lis carving still visible. The drop at comb is 1 7/8”, drop at heel is 3 1/4″. The LOP measures 14 1/2” and 13 3/8” from the triggers to the back of the recoil pad, 13 1/2″ and 12 3/8″ to the back of the wood. The stock is noticeably cast-on for a left-handed shooter (see Our Assessment). The pad has hardened with age, showing scattered cracking, moderate wear and losses at the heel and toe, and crushing at the heel. Overall, the stocks rate in Very Good overall condition as refinished.

Bore Condition: The bores are bright. There is no erosion in the bores, but there are deep scratches in the right side of the left chamber and the bottom of the right chamber.

Overall Condition: This shotgun retains about 70% of its metal finish. The finish is thinning at all edges, notably at the muzzles. The barrels have generally strong finish with some light wear along each side over the forend, some scuffing along the right barrel a few inches behind the muzzle, infrequent minor surface oxidation and a few other light nicks and scratches. The exposed portions of the receiver have mostly muted and show some scattered minor oxidation, with strongest color under the lever and on the trigger plate inside the guard. There is also some color around the fences. The guard has some light surface oxidation. The triggers have some light wear in their gold finish. The screw heads range from sharp to tool marked with strong slots. The markings are clear. Overall, this shotgun is in Good-plus condition. (See Mechanics)

Mechanics: The left ejector does not function properly. Otherwise, the action functions correctly. The barrels lock up with no play to the frame. The safety has three positions. The front position is fire, but engages automatically when the lever is pushed. The middle position is safe. The rear position is fire and will not engage automatically when the action is opened. We have not fired this shotgun. As with all used firearms, a thorough cleaning may be necessary to meet your maintenance standards.

Box, Paperwork & Accessories: This shotgun comes with a pair of Winchester 12 GA brass casings, a signed Ithaca Gun Company letter dated April 20, 1964 with information about the gun, and a photo from the consignor of his great-grandfather who originally purchased the gun. The letter confirms that this serial number was made as a Flues Model Grade 4E shipped March 17, 1910.

Our Assessment: The making of quality double barrel shotgun in America involves a number of companies which were interconnected and Ithaca is no exception. William Baker, Leroy Smith and Lyman Cornelius Smith would start a company to produce guns of Baker’s design in 1879. In January of 1883, Baker would purchase a lot on the bank of Fall Creek in Ithaca, New York from which a water wheel could power a factory, the factory which would become the Ithaca Gun Company. Lyman Smith would go on to form his own company, L.C. Smith. Just four years later, Baker would leave Ithaca and go on to join his brother to form their own gun making company, though he would die only two years later. Ithaca would go on to be one of America’s greatest double gun makers as well as developing their famed Model 37 pump shotgun and producing 1911A1 pistols for the United States during WWII. Designed by Emil Flues, the Flues Model was introduced in 1908 as Ithaca’s newest and most advanced design, yet. The new hammer and cocker design produced a faster lock-time, measured at 1/625th of a second and the frame was stronger due to a simpler lock system which required less metal to be removed and thus did not require reinforcement of the water table and standing breech. This example was produced in 1910 and is a scarce Grade 4E. The included letter from Ithaca Gun Co. notes “We built approximately 223,000 of these models from 1908 through 1926. Naturally there were many variations of this model ranging from a No. 1 Field Grade which sold for $37.00, through the Sousa Grade which sold for $1,000.00. We do not have records of just how many No. 4E Flues Model Doubles were sold. Our guess would be that there were not too many.”. The letter goes on to state that this gun was originally sold to A.B. Creamer, also indicated by the “ABC” marking on the stock’s initial plate, and it has remained in the Creamer family ever since. A.B. Creamer was a southpaw, and in addition to pitching left-handed, he also shot left handed and ordered this gun with a stock cast for a left handed shooter. At more than 110 years old, the gun shows signs of use in the field, but also of responsible maintenance. Though the left ejector is not currently functioning properly, the action still locks up tight and the bore are still great. The wood shows wear from field use, but the metal still retains much of its original finish. This is not just a great example of a scarce Ithaca Flues Grade 4, it’s not just a beauty with fine engraving and gorgeous grain in its stock, it’s also a fine American field gun that could still be dropping birds for another century. Please see our photos and good luck!