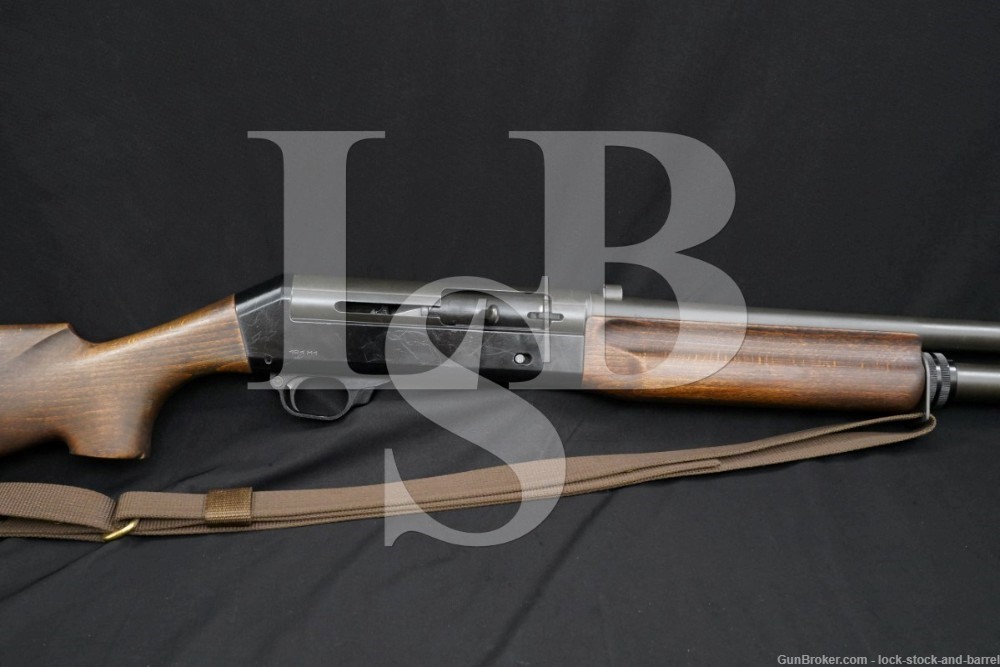 Sights / Optics: The front sight is a wide rectangular blade, fixed to the barrel. The rear sight is a cylindrical base with a flat base that cuts the sighting image down to a crescent that really helps align the front sight, please see our pictures.

Stock Configuration & Condition: The stocks are a two-piece smooth wood with an oiled finish. The forend has deep finger grooves and the buttstock has a pistol grip and fluted straight comb. The buttstock shows some scattered light scratches and compression marks. The most noticeable mark is a deep ding on the front edge of the pistol grip. There are a couple of little dings into the finish. The forend has a couple of compressions, scuffs, and light hairline scratches from use. The most noticeable mark is a scrape on the upper edge of the left side towards the rear. The LOP measures 13” from the front of the trigger to the back of the Pachmayr White Line black ventilated recoil pad and 12″ to the wood. The pad has a white spacer and was installed well. The pad has some light wear. The stocks rate in about Fine overall condition.

Bore Condition: The bore is bright but for some spots of persistent lead fowling. There is no erosion.

Overall Condition: This shotgun retains about 90% of its metal finish. There are some light hairline scratches on the lower receiver and there is some thinning on some of its edges. There are some scattered scuffs on the parkerized steel components that have lightly thinned the finish. There are a couple of thin scratches on the top of the upper receiver at the front. The markings are crisp. The pinheads are unmarred. Overall, this shotgun rates in about Very Good-Fine condition.

Mechanics: The action functions correctly. The bolt glides with fluidity, the trigger is crisp, the system flung our snap caps with authority. The tube holds 7 rounds of 2 3/4″ shells. The trigger pull is crisp. We have not fired this shotgun. As with all used firearms, a thorough cleaning may be necessary to meet your maintenance standards.

Our Assessment: The 121 M1 M&P from Benelli was a pre-Super 90 beast of a semi-automatic shotgun with smooth mechanics and unbelievably effective sights. Introduced in 1978 to replace the old Benelli Autoloader, the SL-80 (also known as the 121 SL-80) is a range of shotguns which was designed for civilian, police, and military work. The SL-80 and its later versions are available in a variety of finishes, construction materials, and degrees of fanciness, from basic bluing to versions which are built using the finest quality of walnut root and engraving with gold inlays and plating. Several military and police versions of the SL-80 series were also produced, called the 121 M-1 series. The basic 121 M-1 uses a weatherproofed walnut stock with a semi-pistol grip and a standard extended magazine. At their heart, however, all members of the SL-80 series are semiautomatic recoil-operated shotguns, stressed to fire both 2.75-inch and 3-inch shells with a variety of different special shells and loadings (though for best results, Benelli recommends that only standard loadings be used in the series).  The SL-80 series is well known for the ability of its semiautomatic action to cycle very quickly while producing lower levels of recoil than comparable shotguns. This example is in about Very Good-Fine condition with a bright bore and enough heft to slow the pounce of buckshot. This shotgun should be great for home defense or 3-gun matches and looks like a best with its wood stocks and ported barre, a modernized riot gun if you will. Please see our pictures and good luck!