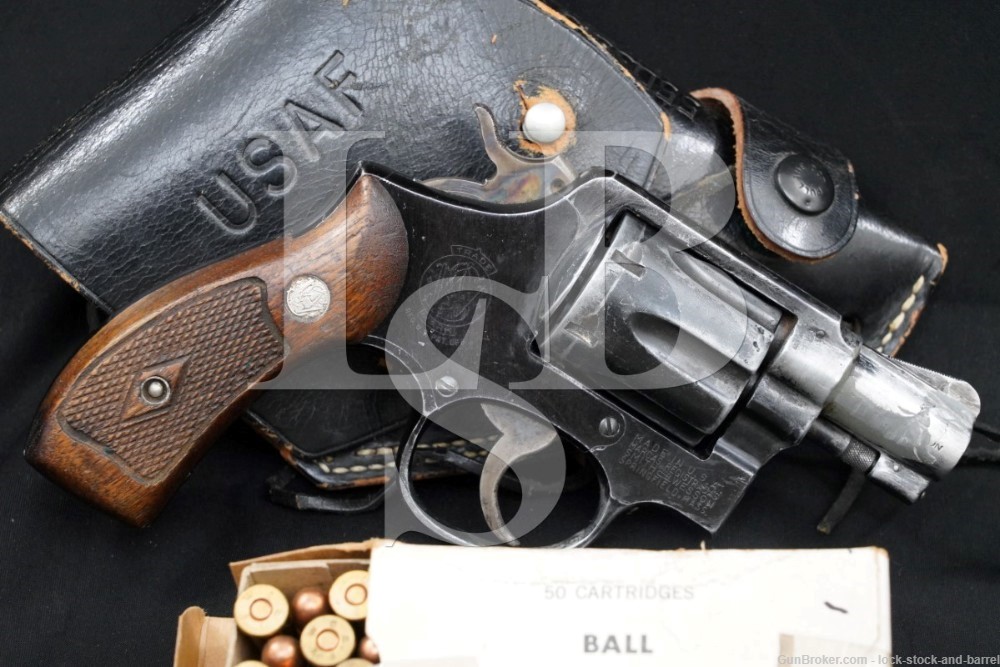 Stock Configuration & Condition: The grips are checkered walnut magna stocks with S&W logo medallions and smooth diamonds around the grip screws. The interior of the left panel has a crack. There are some scattered little compressions, scuffs, draglines, and dings. The checkering is strong. The grips rate in about Very Good-Fine overall condition.

Overall Condition: This handgun retains about 50% of its metal finish. There are some scattered little nicks and scuffs. There is some mottled thinning on the alloy components with heavier mottled finish loss on the cylinder. The cylinder has some spots of erosion and wear on the timing notches. There is also heavy mottled finish loss on the trigger guard. There are some scrapes on the yoke at the bottom that have removed surface material. There are heavy scratches and finish loss on the right side of the barrel. There is what looks like a small chunk of metal loss on the right side of the barrel that has been covered in JB Weld but the inside of the bore looks good. The screw heads are tool marked. The markings are clear. Overall, this handgun rates in about Good condition.

Mechanics: Due to the alloy construction of the cylinder, we do not recommend shooting this revolver. The barrel also looks like it has material loss that has been covered in JB Weld. The action functions correctly with light side-to-side play in lockup. We did not fire this handgun. As with all used firearms, a thorough cleaning may be necessary to meet your maintenance standards.

Our Assessment: When the Korean War started in 1950, the US Air Force put out a call for lightweight, compact personal defense weapons they could issue to aircrews. Colt and Smith & Wesson, two of the largest and oldest revolver manufacturers, both submitted prototypes that used aluminum alloys in their designs. Fun Fact: While a common material today, aluminum was almost exclusively used in prototypes and one-off firearms prior to the 1950s. Oliver Winchester built a prototype shotgun with aluminum receiver plates as early as 1865, but the cost to purify and process aluminum was prohibitive back then. The Air Force would adopt Smith & Wesson’s design and ordered over 40,000 of these lightweight six shooters in .38 Special. These would arm aircrewmen as well as agents in the Office of Special Investigations. Unfortunately, the alimunum alloy that was so cutting edge and lightweight that it helped Smith & Wesson win the Air Force contract was this product’s ultimate undoing. By 1959, many of the aluminum cylindars and frames of these revovlers showed significant breaks, cracks, and weaknesses, some units having ruptured altogether. The Smith & Wesson M13 Aircrewmen revolver, which requires the low-pressure M41 Special Ball ammunition as they couldn’t withstand commercial ammo loaded with lead bullets, was scraped (literally, in most cases). But these guns were the beginning of a revolution in gun materials, and this revovler and its accessories showcase that history perfectly. Whether you’re a general firearms collector, military historian, or specifically a Smith & Wesson fan, this revovler would improve any collection it joined.