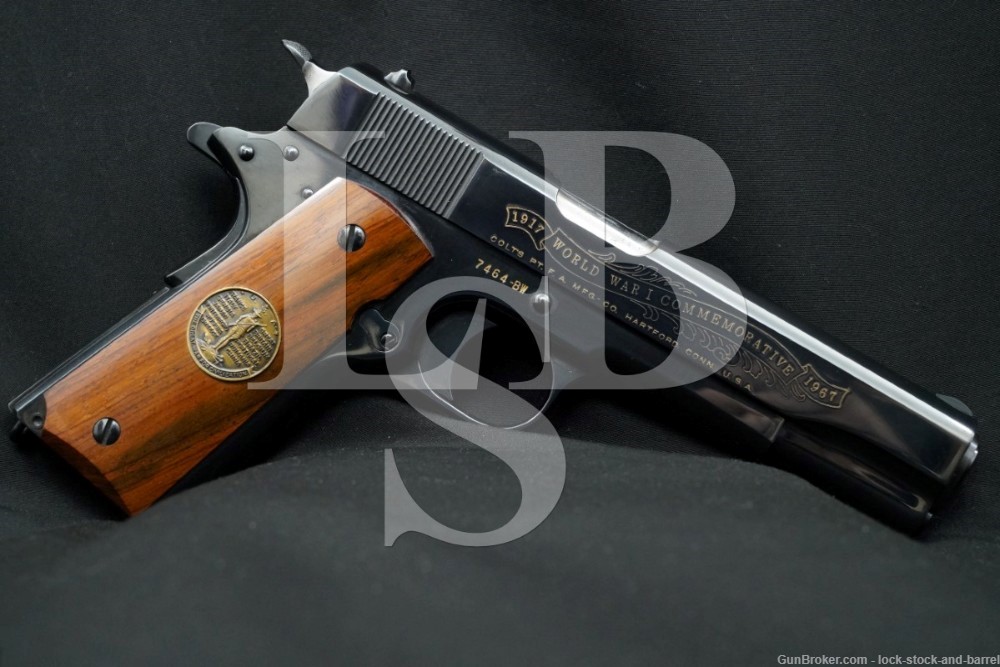 Stock Configuration & Condition: The grips are smooth wood. The left grip has a medallion of an American eagle marked “1917*1918 / WORLD WAR”. The right grip is marked with a medallion of an American soldier, and marked “U.S.A. / THE GREAT WAR FOR CIVILIZATION” and with the names of our allies. The left grip also has a rectangular plaque marked “BELLEAU WOOD”. The grip has no notable wear or damage, only light handling marks. There are no chips or cracks. The grips rate in about Fine condition.

Overall Condition: The pistol retains about 97% of their metal finish. There are a few scattered minor marks. The chamber has some minor surface oxidation. Some of the gold fill on the markings has worn or muted. There are light handling and operational marks. The markings are clear and the screw heads are sharp. The pistol rates in about Fine condition.

Box, Paperwork & Accessories: Included is a 7-round Colt magazine.

Our Assessment: The best of man can only be seen in the worst of circumstances. This gorgeous 1911 pistol commemorates the Battle of Belleau Wood, a series of fights where allied French and American troops would defend, lose, and reclaim the town of Chateau-Thierry and surrounding regions like Belleau Wood against German forces. On June 1, 1918, Chateau-Thierry fell to German troops who then moved forward into Belleau Wood. By the same evening, German forces broke through the French line, forcing a contingent of US Marines to march more than 6.5 miles and plug the gap. The US Marines dug in (literally, with their bayonets) and held their position against German attacks even as they were told to retreat. Over the next several days, the Marines repelled one German assault after another until an Allied offensive operation started to retake the Belleau Wood. Known as the Marine’s first crucible, these engagements saw waves of American marines cut down by German machine gun fire, but the men relentlessly continued until they gained a solid foothold for the Allies. A stalemate of back and forth fighting and the constant barrage of artillery turned the once-picturesque woods into a shadowy jungle of shell-shattered trees and casualties. Expelling the Germans from the woods took six attacks by the marines, but the fighting would cease on June 26, 1918 with the Marines declaring victory and ending one of the bloodiest battles US forces would fight in World War I. This is a beautiful Colt Government Model 1911 with a high luster blued finish and gold-filled engraving. The medallions set into the custom grips commemorate the valor, sacrifice, and victory of the men at the Battle of Belleau Wood. The pistol is in Fine-Excellent condition and appears to have seen little use outside of the factory, with very minor marks. This series from Colt commemorates the four major battles our soldiers fought in World War I, the “War To End All Wars”. This is the Belleau Wood 1911 made in 1968. This is an amazing tribute to the contribution America has made to keep the world free. Please see our pistols and good luck!