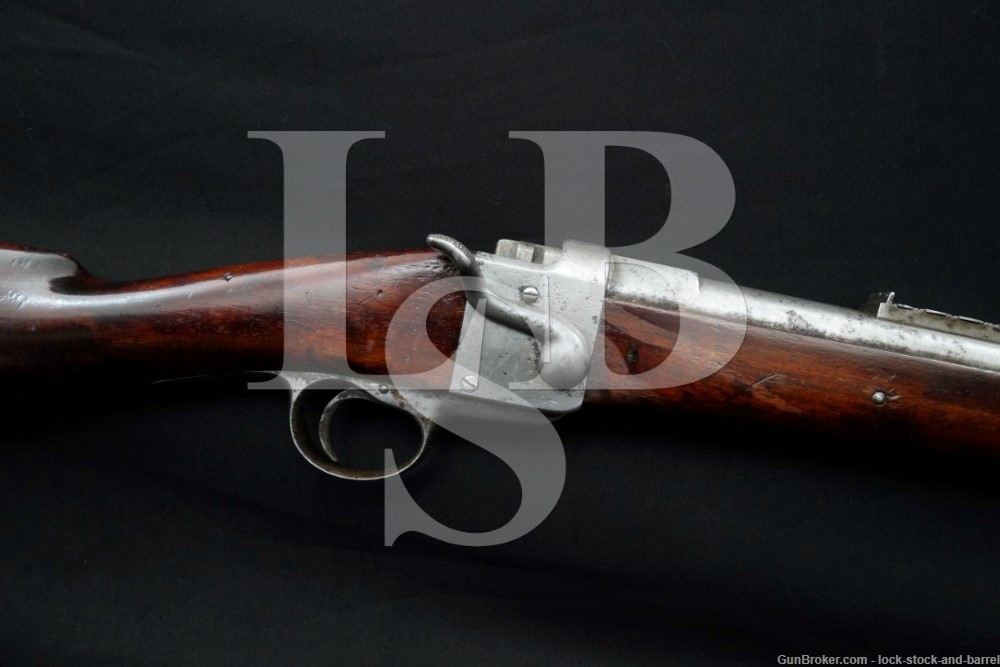 Sights / Optics: The front sight is a blade dovetailed to a base fixed to the front of the barrel. The rear sight is an Express-style sight with a fixed “V”-notch at the rear marked “50”, four progressively taller folding “V”-notched leaves marked “100”, “200”, “300” and “400” and a folding ladder-style sight with a “V”-notched slider. The ladder is graduated from 6-10, apparently in hundreds of yards on the right, the left has more coarse graduations marked from 1-4, though the purpose of these markings is less clear. Each notch has a vertical line aiming reference. The 100 and 300 yard notches are missing their platinum filling on this line, the 400 yard notch’s platinum filling is incomplete. The ladder sight is bent slightly, with the slider moving freely in some areas and being quite tight in others.

Stock Configuration & Condition: The stocks are two-piece smooth walnut. The full-length forend is secured with a tapered pin at the rear and a barrel band at the front which incorporates a sling swivel, with a metal nosecap and a slot for the included clearing rod. The buttstock has a straight grip, straight comb, steel buttplate and a sling swivel in the belly. The buttplate is missing the door over its storage compartment. The stocks have several scattered nicks, dings, scuffs and scratches, the great majority have been finished over. There are areas of thinning finish, most notable at the rear of the forend and there are some spots of pooled finish. There are a few small losses along the edges of the clearing rod slot. There are no cracks. The wood is generally well fit to the metal, but is shy to the buttplate, most notable at the toe. The LOP measures 14 1/8″ from the front of the trigger to the back of the buttplate. The plate has scattered wear and surface erosion with notable tool marks at the hinge-mounting point for the missing door. Overall, the stocks are in about Very Good condition as refinished Antique.

Type of Finish: The finish was originally blue but most surfaces have been polished bright.

Finish Originality: We believe that the spots of finish remaining are original, but most finish has been removed.

Bore Condition: The bore is light gray and the Henry-pattern rifling is strong. There is light erosion  scattered throughout the bore with some spots of pitting.

Overall Condition: This rifle retains about 5% of its metal finish. All remaining finish is in scattered spots under the forend. The exposed surfaces have been polished bright, showing scattered surface oxidation and erosion. There are scattered nicks, scuffs and scratches. The action shows operational wear. The screw heads range from sharp to disfigured with useable slots. The markings are clear. Overall, this rifle rates in about Very Good condition as an Antique.

Our Assessment: Founded in 1812, Westley Richards has a long history of arms making which continues to this day. They are perhaps most famous for their extraordinary double guns, but throughout their history they have also made handguns and even military rifles. This is an interesting example of a Westley Richards rifle made with a Deeley-Edge patent Model 1881 action. The design is elegant, simple and robust with intuitive controls. The rifle is interesting because it almost looks like a military pattern rifle with little in the way of embellishment or adornment, apart from the Express-style sight which clearly indicates its sporting purpose. Chambered for Westley Richards’ .450 No.1 Carbine cartridge, the rifle would be suitable for hunting just about anything in the British Isles as well as most game encountered in continental Europe. The rifle would be a good candidate for restoration, but is also a fine addition for a Westley Richards or early cartridge rifle collection as these 1881 Deeley-Edge rifles are fairly scarce. Please see our photos and good luck!