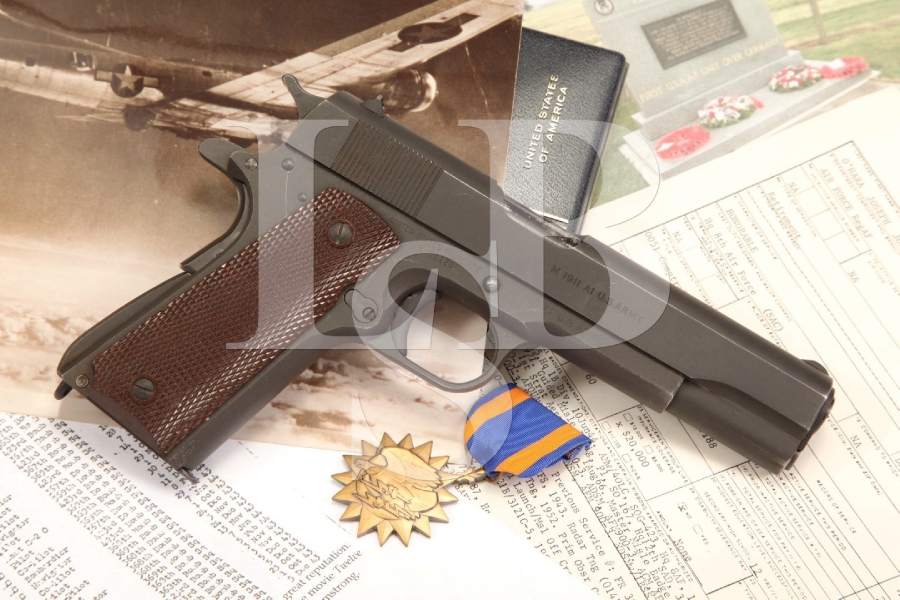 SOLD FOR:$3,241
LSB#: 140407TO02
Make: Colt
Model: 1911 A1
Serial Number: 911208
Year of Manufacture: 1943
Caliber: .45 ACP
Action Type: Single Action, Semi-Automatic with Removable Magazine
Markings: The left side of the slide is marked “Ithaca Gun Co., Inc. / Ithaca N. Y.” The left side of the frame behind the trigger is marked “FJA” and “P” and marked at the front of the trigger guard with a “+” Ithaca proof mark. The “FJA” mark is the final inspection mark of Lt. Col. Frank J. Atwood, inspector for Ithaca and Remington Rand. The right side of the slide is marked “M 1911 A1 U.S. Army” and the top of the slide is marked with a “P” proof in front of the rear sight. The right side of the frame is marked “United States Property / No. 911208” and “M 1911 A1 U.S. Army” and at the rear behind the grip panel with an Ordnance Inspection Stamp. The right front of the trigger guard is marked “O”. The left side of the barrel lug is marked “P” and the right side “HS”, identifying the barrel as one of the High Standard barrels supplied to Ithaca.
Barrel Length: 5”
Sights / Optics: The pistol is mounted with a square notched rear sight dovetailed into the slide and a short blade with a slight serrated ramp front sight fixed to the slide.
Stock Configuration & Condition: The grips are checkered reddish brown plastic. The checkering is sharp with a very minor mar on the left side of the grip. The grips rate in about Excellent condition.
Type of Finish: This pistol has a Parkerized finish.
Finish Originality: The finish is original.
Bore Condition: The bore is bright and the rifling is sharp. There is no erosion in the bore.
Overall Condition: This pistol retains about 93% of its metal finish. There is thinning on the edges of the slide, frame, slide release and safety. The slide and frame each show a few light marks in the finish with a mark underneath the slide release and a long mark on the right side of the frame behind the grip. The barrel still has most of its bluing, but there is some thinning in the port area. The hammer checkering and safety serrations show light wear. The serrations on the mainspring housing, slide and slide release are sharp. The grip screws are sharp. The markings are clear, except for the Ordnance Inspection stamp on the right side of the frame, which was lightly struck. Overall, this pistol rates in about Fine condition.
Mechanics: The action functions correctly. It has both a manual and grip safety and the trigger pull has a very small amount of creep. The slide is tight to the frame. We did not fire this pistol. The pistol has a lanyard ring on the bottom of mainspring housing.
Box, Paperwork & Accessories: This pistol comes with one blued 7-round magazine. It shows only light handling marks and is in Excellent condition. Also included are paperwork from its owner and a reproduction of his Air Medal. The paperwork consists of the discharge papers of Joseph John O’Hara Jr. and other paperwork showing he was a 2nd Lieutenant and navigator in the 369th Bombardment Squadron of the 306th Bomb Group, with references showing his squadron saw action on D-Day. His discharge papers show he received an honorable Discharge in 1975 as a Lt. Colonel in the Air Force and cited his previous service in the Army Air Corps during WWII, his various medals and training. The paperwork is in Excellent condition, except for the listing of airmen, which is a fuzzy copy and in Good condition. The medal is believed to be a replacement for his original medal, which was lost. It comes in a black plastic presentation case with gold trim marked “United States / Of America” on the lid in gold letters. The inside of the lid is covered with white plastic and the bottom is covered with gray felt. Included in the case are the medal, with wrap brooch, a ribbon and lapel pin. The medal is a bronze compass rose of sixteen points that has a fleur-de-lis design in the top point. The front has an American Eagle, swooping downward and clutching a lightning bolt in each talon. The reverse has a raised disk on the compass rose, left blank for the recipient’s name and rank. The ribbon has a broad stripe of ultramarine blue in the center flanked on either side by a wide stripe of golden orange, and with narrow strip of ultramarine blue at the edges. The case is in Excellent condition and the medal is in Fine condition with light tarnish.
Our Assessment: This is a U.S. Government marked Ithaca Model 1911 A1 pistol made in 1943 during WWII. It is in about Fine condition with a thinning on the edges of the slide and a few handling marks. It has its original finish and is correctly marked for a pistol made by Ithaca in 1943. The barrel is made by High Standard, who supplied Ithaca with barrels in that time frame. It has a great bore with sharp rifling. This pistol includes documentation on the original owner who served as a 2nd Lieutenant with the 306th Bomb Group during 1944 and went on to become a Lt. Colonel in the Air Force, and a reproduction of his Air Medal. This is a highly collectable package. Ithaca produced fewer pistols that either Colt or Remington Rand during WWII, and you don’t see very many in such good condition with the original finish. If the collectors don’t jump on this one, it will be a long time before they see another documented package of a WWII 1911A1 Ithaca in this condition.