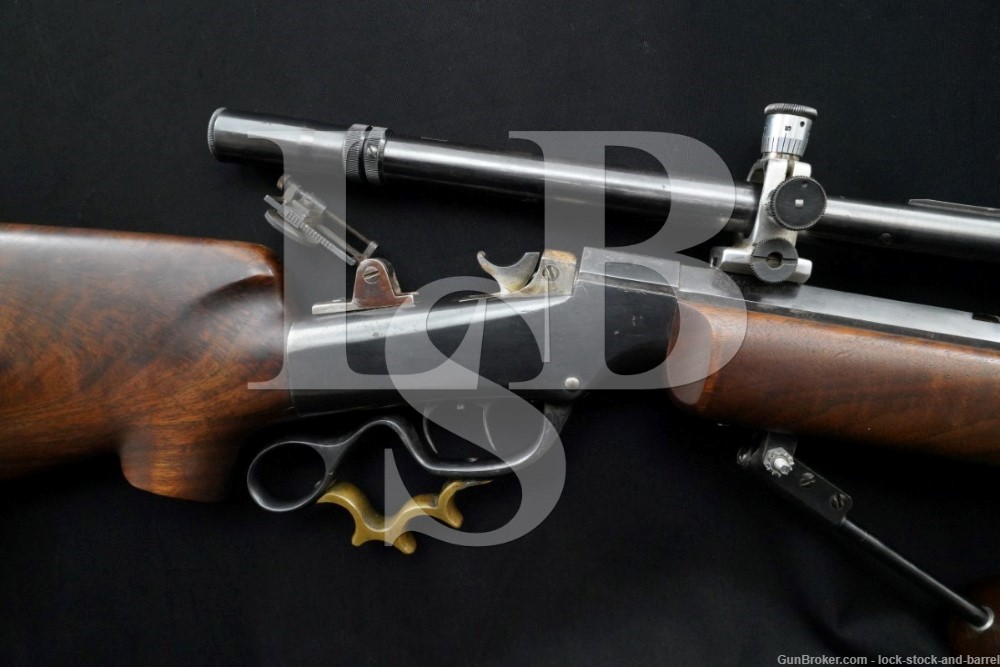 Sights/Optics: The front sight is a globe sight with a post reticle atop a ramped riser that is slotted in a base and dovetailed to the barrel. The rear sight has been removed. The top of the barrel is equipped with a 20-power J. Unertl Ultra Varmint – Calibrated Head optic with a fine crosshair reticle. The scope shows scattered nicks and scratches with some light oxidation. The lenses retain a decent level of visibility. The top of the receiver is equipped with an elevation adjustable peep aperture sight.

Stock Configuration and Condition: The stocks are a two-piece Schuetzen set with a folding palm rest on the forearm, S-bottom pistol grip, monte carlo comb with a cheek piece, and an adjustable Schuetzen style buttplate. The palm rest swings freely. There is a scratch on the right side of the forearm and also a couple on the cheekpiece. The belly shows a series of scratches. There are other infrequently dispersed light draglines  and compressions throughout the wood. There is a small split in the right side of the split. There are no chips. The LOP measures 12 7/8” & 13 7/8” from the fronts of the triggers to the back of the buttplate, which is in the white and shows some scattered pitting. It also has several nicks and scratches. Overall, the stocks rate in Good-Plus condition as not original to the gun.

Bore Condition: The bore is bright with defined rifling. There is some very faint erosion near the muzzle.

Overall Condition: This rifle retains about 78% of its current metal finish. There is thinning on the leading edges. There are scattered scratches, dings, and surface oxidation on the barrel. There are some notable mars on the bottom and left side of the barrel. There are several tool marks around the lever screw on both sides of the receiver. There is scattered light erosion and pitting on the receiver and lever as well. The screw heads are slightly disfigured with serviceable slots. There is a drilled, tapped, and filled hole on the left side of the receiver that is unoriginal to the rifle, we do not know the purpose for it. The markings are clear. Overall, this rifle rates in Very Good condition as Antique and custom.

Mechanics: The action functions correctly. The lever has been drilled and tapped and equipped with a custom finger groove piece. The action closes tightly with some play between the receiver and lever. We did not fire this rifle. As with all used firearms, a thorough cleaning may be necessary to meet your maintenance requirements.

Box, Paperwork, and Accessories: Included is the previously mentioned scope, the attached palm rest, and the finger groove attachment on the lever.

Our Assessment: The most famous Marlin-Ballard model of the Old West—the No. 5 Pacific Rifle —was nearly indistinguishable from its Montana cousin. The slightly lighter Pacific first appeared in 1882 and was in production until 1890, when a reorganized Marlin FireArms dropped the Ballard line. This customized example is equipped with a Schuetzen style stock and a John Unertl optic. The forearm has a folding palm rest allowing for greater accuracy. The Unertl Optical Company, Inc. was a manufacturer of telescopic sights in the United States from 1934 until 2008. They are known for their 10× fixed-power scopes that were used on the Marine Corps’ M40 rifle and made famous by Marine Corps Scout Sniper Carlos Hathcock during the Vietnam War. This antique rifle is in about Very Good condition and would fit well within a Marlin Ballard rifle collection. Please see our photos and happy bidding!