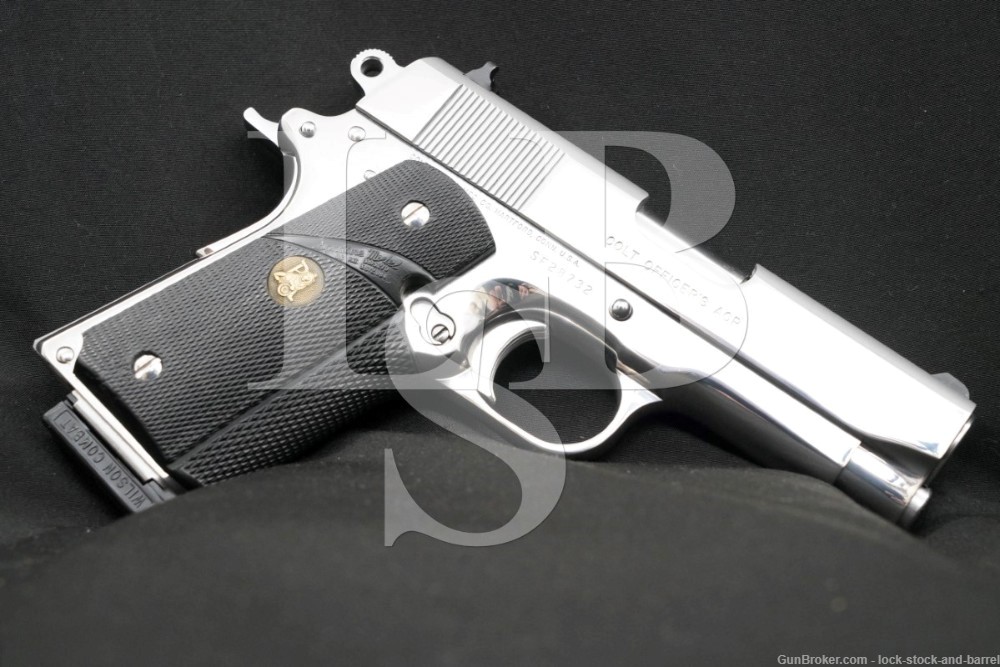 Stock Configuration & Condition: The grip is a one-piece checkered black rubber Pachmayr Signature which wraps around the frontstrap. The grip has light handling wear with a few minor scuffs and scratches. The checkering is well defined. There are no rips or tears. Overall, the grip is in Fine condition as not original to the gun.

Overall Condition: This gun retains about 97% of its metal finish. There are a few little draglines and light hairline scratches on the left of the slide and frame. There are a few little scuffs and light rubs. The action shows minor operational wear. The screw heads are sharp. The markings are clear. Overall, this gun appears in Fine Plus condition but rates about Very Good due to the safety (see Mechanics).

Mechanics: When the safety is engaged, the plunger detent comes out under the safety thumbpiece, needing to be pressed back in to disengage the safety. Otherwise, the action functions correctly. The trigger is crisp. The slide to frame fit shows very little play. We did not fire this pistol. As with all used firearms, a thorough cleaning may be necessary to meet your maintenance standards.

Box & Accessories: This pistol comes with a single 7-round Wilson Combat magazine.

Our Assessment: In the 1970s, the Rock Island Arsenal began production of a shortened 1911 for use as a General Officer’s pistol. These pistols were built only for issue to Generals and were not available to the general public. The idea of a compact 1911 was already around; the Commander had been in production for some time up to that point and gunsmiths had made more compact 1911-style pistols as one-off custom guns. Detonics was one of if not the earliest companies to introduce a production 1911-style pistol smaller even than the Commander, their Combat Master. Colt took some time to react to the popularity of these guns and then introduced the Officer’s ACP in 1985. This example was produced in 1988 and appears in Fine Plus condition with 97% of its bright stainless finish, a bright bore and strong mechanics. There is an issue with the safety and its plunger detent, but once that’s been addressed, this will be a heck of a pistol. With its shorter barrel and frame, this pistol brings more concealability to the classic 1911 design. The installed grips will be quite comfortable for those with larger hands, despite the small size of the frame. Please see our photos and good luck!