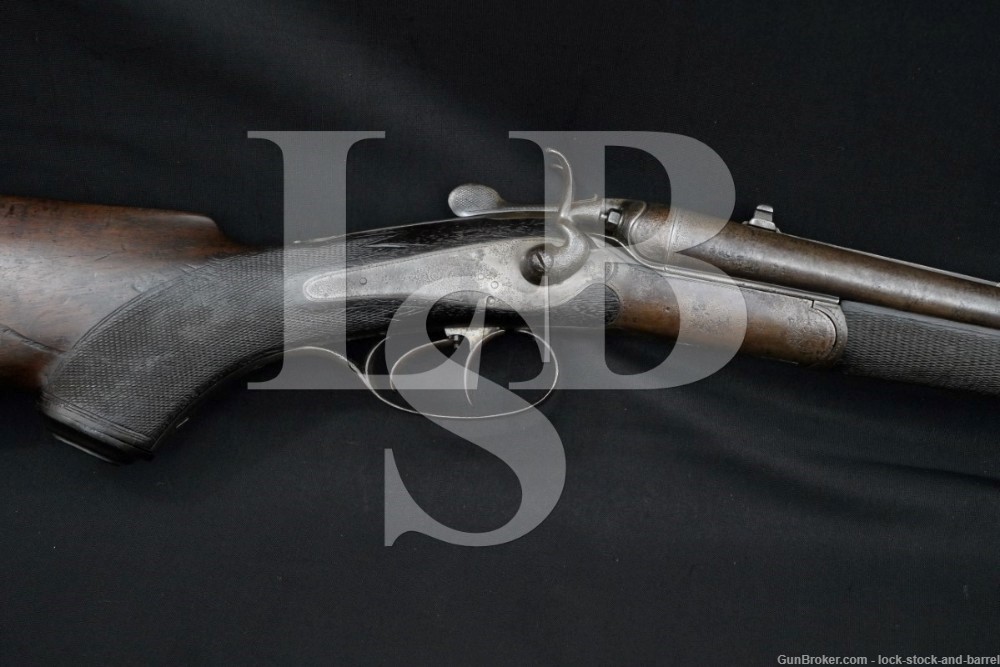 Sights/Optics: The front sight is a small rounded blade dovetailed into a rise at the front of the barrel rib. Ther rear sight is a v-notch with a secondary folding v-notch dovetailed to the barrel rib. There are mounts installed behind the rear sight for some form of detachable scope mount, but no mount is present. The top tang has a folding aperture sight. The sight appears to be missing a detent or spring, it folds freely.

Stock Configuration and Condition: The stocks are two-piece checkered wood with lever-secured splinter forend, capped pistol grip, fluted straight comb with cheekpiece, and a checkered steel buttplate with swiveled trap door over a storage compartment for two rounds of ammunition. There is a sling swivel in the belly and mounted also on the bottom of the barrels. The buttstock has light nicks, dings, and compressions throughout with a few moderate drag lines and compressions on the belly. The wood where it meets the buttplate is darkest and has deeper grain lines. The most notable wear is at the toe. The right side has a crack at the top that runs from the end of the wood forward approximately 1 1/2”. The forend wood has light nicks and dings along the edge and, like the buttstock and grip, has darkened with age and oil. The buttplate is slightly proud to the wood. There are no chips. The LOP measures 13 7/8” front the front face of the forward trigger and 12 7/8” from the rear trigger to the back of the plate. The plate has gone to a light patina with some erosion at the heel and scattered light wear. Overall, the stocks rate in Good-to-Very Good condition.

Bore Condition: Both bores are dark gray but have well-defined rifling. There are spots of light erosion scattered throughout along with moderate stubborn fouling. The bores have infrequent minor pitting with a spot of more notable pitting in the top of the left bore a few inches behind the muzzle.

Overall Condition: This rifle retains about 15% of its metal finish. Blue inish remains mostly in protected areas such as along the edges of the rib, around the sights and mounts, and on the bottom where protected by the handguard. The forend iron has strong case color on the interior while the exterior has mostly gone to a light-moderate patina. The receiver has case color on the water table and the lockplates around the hammer with some fairly strong case color on the trigger plate inside the guard. Most other surfaces have gone to a light-moderate patina. There are scattered light nicks and scuffs throughout along with a few clusters of light-moderate surface erosion. The sights have light tool marks. Most edges are worn to white. The screw heads are tool marked with serviceable slots and the markings are clear. Overall, this rifle rates in about Good condition.

Mechanics: The action functions correctly. The barrels lock up with no play to the receiver. The triggers are crisp, very light and crisp when set. Each trigger can be set by pushing the trigger forward until the trigger clicks. We have not fired this rifle. As with all used firearms, thorough cleaning may be necessary to meet your maintenance requirements.

Our Assessment: T.E. Lawrence said in Lawrence of Arabia, “Big things have small begginings.” Ferlach is a small town situated in the Rosental/Rož Valley of the Drava River deep in montainous Austria. It is known now as it has been for several hundred years as a hub of fine gunsmithing due to Empress Maria Theresa making its gunsmiths the armorers of the Habsburg Monarchy. In the 1700’s  Maria Theresa had production focused mainly on the military, and the entire army was equipped with Ferlacher rifles. When the military production was moved to Steyr at the beginning of the 19th century, the gun makers began to specialize in the manufacture of commercial hunting weapons. Renowned for their precision, weapons made in Ferlach make the heart of every collector beat faster and are coveted by hunters all over the world. This example was made by M. Ogris in 1901. Information regarding M. Ogris is utterly missing, but the rifle on offer here speaks for itself. It’s plain to see that it has all the quality promised by manufacture in Ferlach despite the wear present. If you look beyond the effects of use and age, there are still spots of lovely case coloring and rich bluing. This was likely a prized and oft used hunting rifle whose wear is entirely consistent with use in the field. The chief virtue of this rifle is its weight—it is considerably lighter than its cousins at just over six pounds, making for an excellent stalking rifle that can be easily carried throughout the day (or days!) while on the hunt. Despite its light weight, it is still chambered for a cartridge that is more than up to the task of taking down any European game one might find whilst trapsing through the Austrian Alps. Mechanically, this rifle feels almost new—the lockup is utterly solid, the set triggers are light and function perfectly. Old world craftsmanship is becoming more rare, and the lucky winner will have in this rifle one of the best examples of it. Good luck and happy bidding!