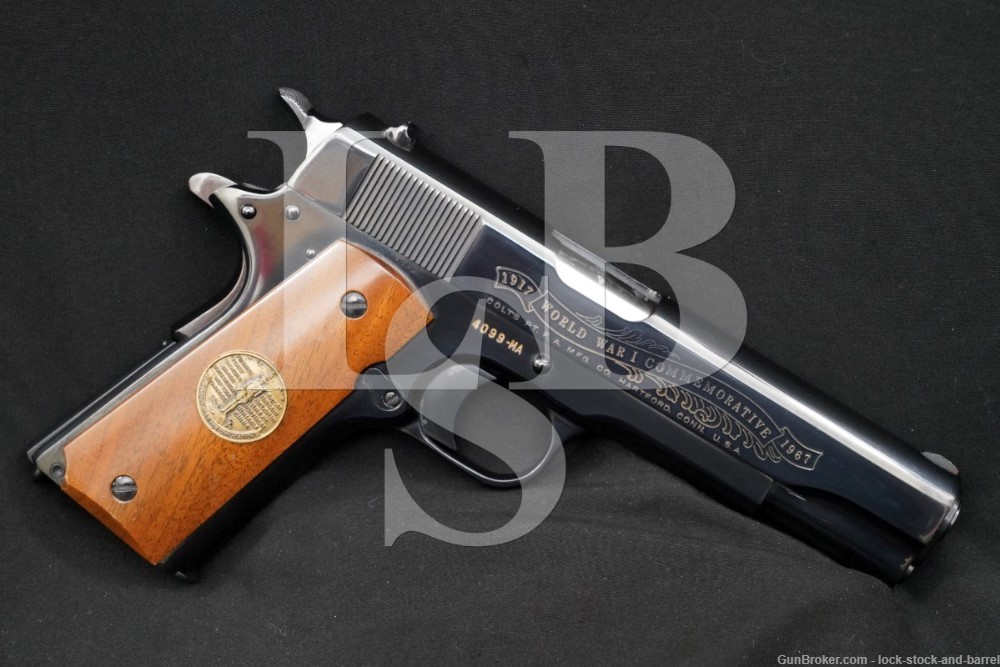 Markings: All the markings are gold-filled. The right side of the slide is marked with a banner reading “1917 / WORLD WAR I COMMEMORATIVE / 1967” and “COLT’S PT.F.A. MFG. CO. HARTFORD, CONN. U.S.A.”. The chamber is marked “COLT .45 AUTO” and also has a “VP” proof. The right side of the frame with the serial number. The left side of the slide is engraved with a scene of American soldiers attacking Germans barricaded behind pill boxes and at the rear with the Rampant Colt logo.

Stock Configuration & Condition: The grips are smooth wood. The left grip has a medallion of an American eagle marked “1917*1918 / WORLD WAR”. The right grip is marked with a medallion of an American soldier and marked “U.S.A. / THE GREAT WAR FOR CIVILIZATION” and with the names of our allies. The left grip also has a rectangular plaque marked “MEUSE ARGONNE”. There are light handling marks. There are a couple of tiny compressions, most noticeable on the left panel at the bottom rear corner. There are few little scuffs and areas of finish loss, most noticeable on the right panel. There are no chips or cracks. The grips rate in about Fine condition.

Box, Paperwork & Accessories: Included is a 7-round Colt magazine and a Meuse Argonne display case.

Our Assessment: The best of man can only be seen in the worst of circumstances. This beautiful 1911 pistol commemorates the Meuse-Argonne Offensive, a 47-day operation fought between Allied and Central Powers that concluded the Allied forces’ Hundred Days Offensive and ultimately led to the end of World War I on November 11, 1918. This was, and still is, the largest military offensive operation undertaken by the United States, with over one million American soldiers fighting, but it was also the deadliest battle in American history. Individuals like John “Black Jack” Pershing, Medal of Honor recipeint Alvin York, and George S. Patton all earned glory and notoriety during this operation. It’s hard to capture the breadth and importance of this battle in a short paragraph. This was an all or nothing sort of event, the last push to end a years-long war, a war which saw extensive use of the Colt 1911 pistol. This is a beautiful Colt Government Model 1911 with a high luster blued finish and with gold-filled engraving. The pistol also has custom grips with WWI medallions and the name of the battle the particular pistol commemorates. The pistol is in Fine condition and appears to have seen little use outside of the factory but has a few minor marks and a few spots of oxidation. This series from Colt commemorates the four major battles our soldiers fought in World War I, the “War To End All Wars”. This is the Meuse Argonne 1911 made in 1969. This is an amazing tribute to the contribution America has made to keep the world free. Please see our pistols and good luck!