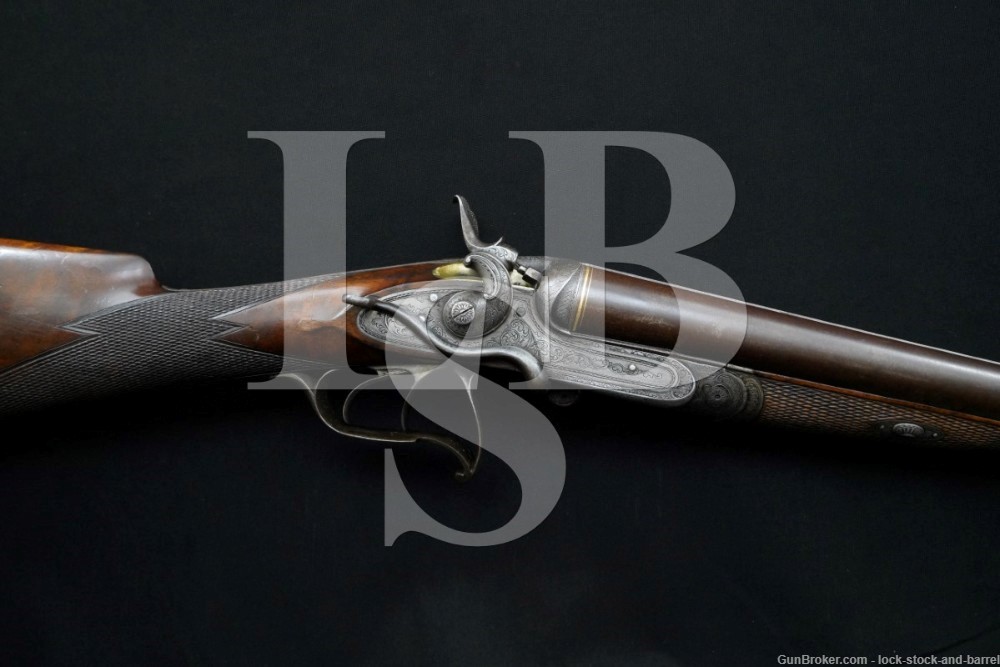 Serial Number: The receiver does not have a serial number, the butt plate is marked “878”.

Year of Manufacture: The only dated reference we could find stated that Casimir Weber made guns until 1912.

Gauge: 16 Gauge, 2 5/8” Shells; there are no proof marks, we discourage use with smokeless powder.

Action Type: Side by Side, Exposed Hammer, Dual-Trigger Side-lever Shotgun with Extractor

Markings: The top of the barrel set rib is marked “WEBER-RUESCH. ZURICH” in gold. There are gold rings at the breech of both barrels, traversing the concave rib. The receiver and butt stock metal components have beautiful foliate scroll engraving, the butt plate has circle and dot line work and is marked “878”. The hammers have nice intricate work as well, please see our pictures.

Choke: Both Cylinder Bore, Both Fixed

Sights / Optics: This shotgun is mounted with a brass bead, screwed into the concave, tapered rib.

Stock Configuration & Condition: The stocks are two-piece checkered select walnut. The wedge-secured splinter forend has a triangular inlaid horn tip. The buttstock has a straight grip, straight comb with cheekpiece, steel buttplate with long top tang and a sling swivel in the belly (the other swivel is mounted to the bottom of the rib forward of the forend). The forend has a short crack and a small chip-loss at the left-front edge with a few other scattered minor nicks and scratches. The buttstock has several scattered nicks, scuffs and scratches. There are a few small losses at the right of the toe and in front of this are a few small but deep dings. On the left above the belly, there are a couple of spots which look like knots were filled. The checkering is well defined. Drop at comb is approximately 1 3/8?, drop at heel 2 1/2?. The LOP measures 12 1/2” from the front of the rear trigger and 13 1/2” from the front of the forward trigger to the back of the metal butt plate. The plate has beautiful engraving line work, showing a natural gray patina, it was likely case hardened. The plate has splendid fit to the wood but for at the toe, looking to be from age shrinkage. The stocks rate in about Very Good overall condition.

Type of Finish: The barrels are browned damascus with gold inlay, the other metal parts are case colored.

Bore Condition: The bores are semi-bright and there is moderate depth erosion in scattered spots, more so towards the chambers; there are some bumps that translated from dings on the outside of the barrel set towards the muzzles.

Overall Condition: This shotgun retains about 60% of its metal finish, mostly in the browned barrel set. There is some remaining case coloring, only on protected surfaces. The barrel set has some scrape marks and dings along the rib. There are other marks that made bumps on the inside of the bores. Given the twist construction and its age, we do not recommend firing this shotgun until cleared to do so by a gunsmith. The exposed surfaces of the receiver are mottled gray but retain clarity in the engravings. The under lever has scrapes and light dings. The screw head slots range from sharp to tool marked with serviceable slots. The markings are crisp. Overall, this shotgun rates in about Very Good condition.

Mechanics: The action functions correctly. This shotgun has dual triggers and exposed hammers. With the forend removed, there is nominal play, there is no play with the forend installed. As with all used firearms, a thorough cleaning may be necessary to meet your maintenance standards.

Our Assessment: Unlike all of the nations which surround it, Switzerland has a long history of peace, and so their arms have not seen the sort of, we’ll say non-commercial, distribution that one has seen of firearms from other European nations. It would be a mistake to believe that the pacifism of the Swiss means that they do not have a robust domestic arms industry, in fact it’s quite the opposite. The cantons of Switzerland have produced Jean-Samuel Pauly, the first designer of a breech-loading arm firing a self-contained cartridge, Eduard Rubin, inventor of the full metal jacket bullet, as well as successful firearms companies such as Hammerli, SIG, and more recently, Brügger & Thomet (B&T), each known for the precision and quality of their design and manufacturing. What is less common to find in America is a hand-made sporting gun from a smaller Swiss maker. While in surrounding France, Germany or Italy such guns may have been taken as prizes in any of a number of wars of the 19th and 20th centuries, it is comparatively rare to find such a gun made in Switzerland. This is one such example, made by a partnership between Casimir Weber and another maker named Ruesch, about whom much less information is available. Weber was not only a large firearms retailer within Switzerland, but was also one of the more well known sellers in Europe before the Great War. While less is known about the partnership with Ruesch, it is known that they made some extraordinary firearms in their time, ranging from small pocket pistols to elegantly crafted shotguns, this being one of high quality and would certainly have been quite the pretty penny in its time. The lack of proof marks suggests that it was not produced for the greater European market, and has likely been used to drop birds somewhere in the Swiss countryside. The beauty of the engraving, fit and finish of the wood and of the metal immediately catch the eye and it was likely a prized possession of each of its previous owners. It remains beautiful and will make for a great display piece. Being well balanced and classically styled, it would also be well worth restoring to field-ready condition and taking out on a hunt. Please see our pictures and good luck.