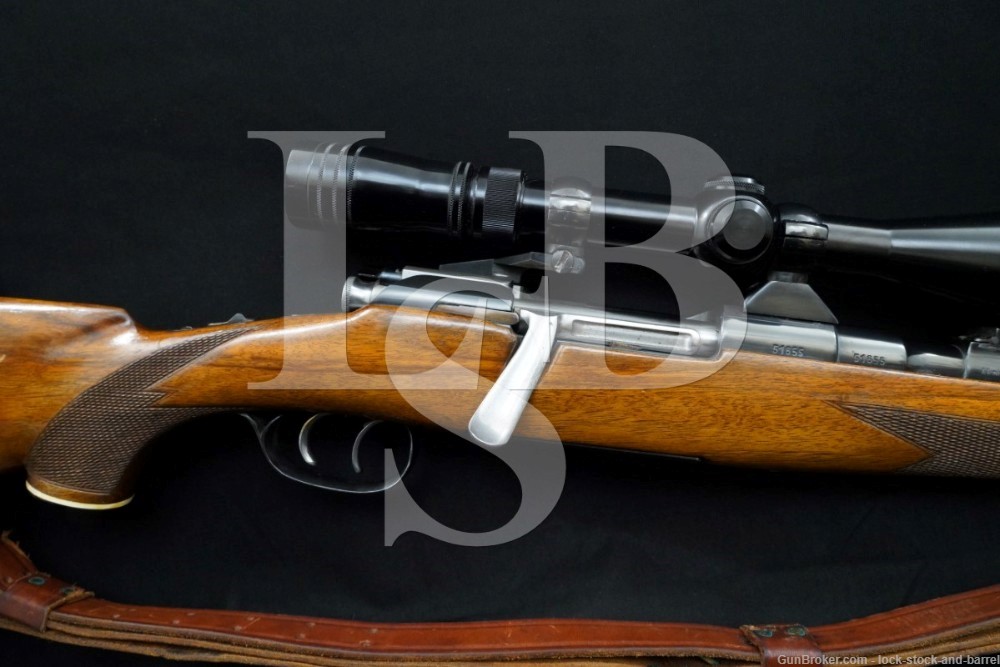 Sights / Optics: The front sight is a beaded blade dovetailed to a checkered, ramped base fixed to the front of the barrel. The base is slotted for a hood that is not included. The rear sight has a fixed “U”-notch and a folding “U”-notch marked “300”, dovetailed to a boss at the rear of the barrel. The receiver has been installed with a pair of bases and rings holding a Redfield 3-9 power wide view scope. The scope has a few scattered light handling marks and a few little marks through the finish. The scope has a duplex reticle and the glass is clear, it rates in about Fine Plus condition.

Stock Configuration & Condition: The stock is one piece checkered walnut full stock with nosecap, capped pistol grip, Monte Carlo comb with cheekpiece, brown ventilated White Line recoil pad, and a sling swivel in the belly. The stock appears refinished. There are a few scattered compressions, little dings, and draglines. The checkering is strong. There are no chips or cracks. The LOP measures 13? and 13 3/4” from the fronts of the triggers to the back of the recoil pad. The pad has some light wear but remains pliable. Overall, the stocks are in about Fine condition.

Bore Condition: The bore is bright with sharp rifling. There is a small amount of faint erosion near the muzzle.

Overall Condition: This rifle retains about 93% of its metal finish. There are a few light marks on the receiver and some spots of stock finish. The barrel has some scattered light scuffs and a couple of little nicks. There is some scabbing on the muzzle. There are a few tool marks to the right of the rear sight base. There are some scuffs and areas of thinning on the bottom of the magazine. The trigger guard has some thinning on the edges and a few little marks. The bolt and bolt handle have some spots of dark discoloration from previous oxidation. The screw heads are tool marked with strong slots. The markings are clear. Overall, this rifle is in about Very Good-Fine condition.

Box, Paperwork & Accessories: Included is a leather sling and the previously described scope.

Our Assessment: The Mannlicher Schoenauer rifles were very popular in Europe, and were mainly made in European calibers until after WWII when they began to be imported into the United States. The Model 1900 rifle continuously evolved until the last model was developed: the Model 1961 MCA. The Model 1961 MC came about from Stoeger’s urging in order to increase sales in the United States. A tall Monte Carlo comb (hence the MC designation, A for all purpose) with cheekpiece was added to make the rifle easier to use with a scope. This is an M1961 MC Carbine with a 22” barrel chambered in .308 Winchester. The stock is a beautiful checkered fancy grade walnut with a pistol grip, and the black grip cap and the recoil pad are both set-off with bright white spacers. The rifle has a full-length Mannlicher style stock and is equipped with double-set triggers. The rifle is in about Very Good-Fine condition with about 93% of its original metal finish remaining. The bore is bright with sharp rifling. Mannlicher-Schoenauer rifles are known to have the smoothest action of any bolt action rifle, helped a little by their rotary magazine that does not drag on the bolt like the follower in a conventional magazine. And although this rifle would make someone a great lightweight deer rifle that could be used on most of the North American game animals, its nice condition is going to catch the attention of the collectors out there who are certain to bid this up well past where the shooters will be willing to go. Please see our photos and good luck!