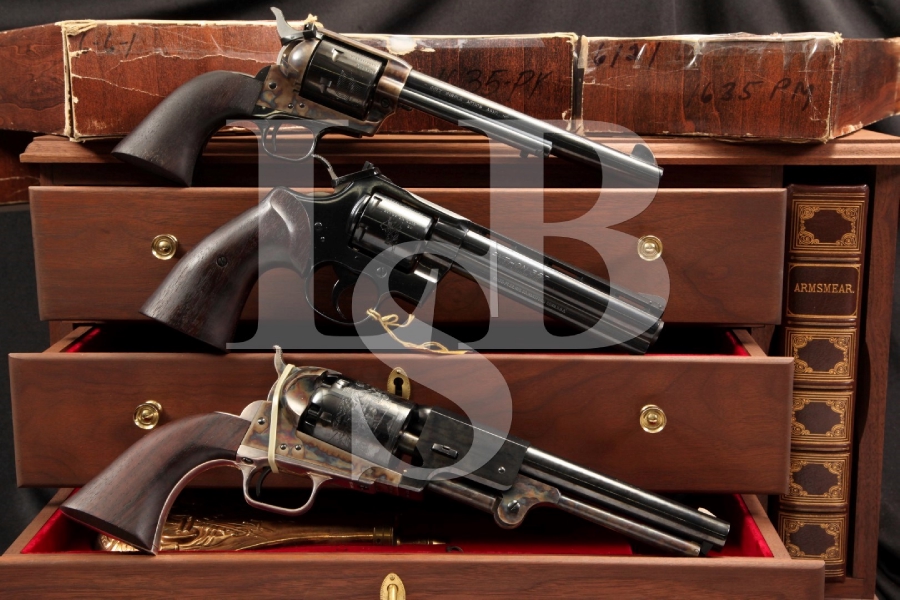 Markings: See Below
Dragoon: The top of the barrel is marked “ADDRESS SAML COLT NEW YORK CITY” and the left side of the barrel is marked “1776 – U.S.A. BICENTENNIAL – 1976”. The left side of the frame is marked “COLTS PATENT”. The cylinder is beautifully marked with the original roll scene. The serial number is found on the cylinder, back strap, trigger guard, loading assembly and barrel assembly.

Bore Condition: The bores are unfired and have been well oiled.

Overall Condition: These handguns are apparently unturned. There is no firing wear whatsoever and only a mark or two from the storage boxes could be found between the guns. They have been zip-tied since purchase according to our consignor and the zip-ties remain. We cleaned off the original factory packing oil film. The screw heads are unturned. The markings are crisp. Overall, these handguns rate in about Excellent and Near New condition.

Mechanics: The actions are and remain unturned.

Box, Paperwork & Accessories: All three guns have the original bags, Styrofoam inserts and wood grain sleeves. The sleeves are taped and a bit tattered. Three “Handling The Handgun” brochures are included, one Disclaimer, one Warranty Stations Pamphlet, one Python Manual and one pre-addressed envelope to the Colt Commemorative Gun Collector’s Association of America and one Flyer for a hunting magazine.

The Original Factory Wood Three-Drawer case is included. Each drawer is velvet lined and locks. Two Keys are provided. Also in the case is a leather bound book, marked “ARMSMEAR” on the spine. This book is “The Home, the Arm, and the Armory of Samuel Colt. A Memorial.” The case is near new with only one sizeable scratch on the top right edge, towards the rear.

All of this comes in the original large cardboard shipping box, which remains sound though it shows its age.

Our Assessment: This may be the most important set for Colt collectors produced. The set encompasses the three quintessential firearms from three generations of Colt revolvers. The Dragoon was designed as a solution to numerous problems encountered with the Walker Colt. Although it was introduced after the Mexican-American War, it became popular among civilians during the 1850s and 1860s, and was also used during the American Civil War. It was the first of the heavy hitting revolvers that became practical for military use. The Colt Single Action Army represents not only a generation of Colt Production, but an Era of American History. The Colt helped tame the West and the 7 ½”.45 LC SAA is a gun that elicits feelings of the Old West upon sight. The Python was the next generation. This gun shows the finest of Colt’s Modern Double Action Revolver design and manufacturing. The Colt Python is desirable. It was first introduced in 1955, the same year as Smith & Wesson’s M29 .44 Magnum. The now discontinued Colt Python targeted the premium revolver market segment. Some firearm collectors and writers such as Jeff Cooper, Ian V. Hogg, Chuck Hawks, Leroy Thompson, Renee Smeets and Martin Dougherty have described the Python as the finest production revolver ever made.

This set is rare and mint. It would be difficult to improve on and is what every Colt collector desires.