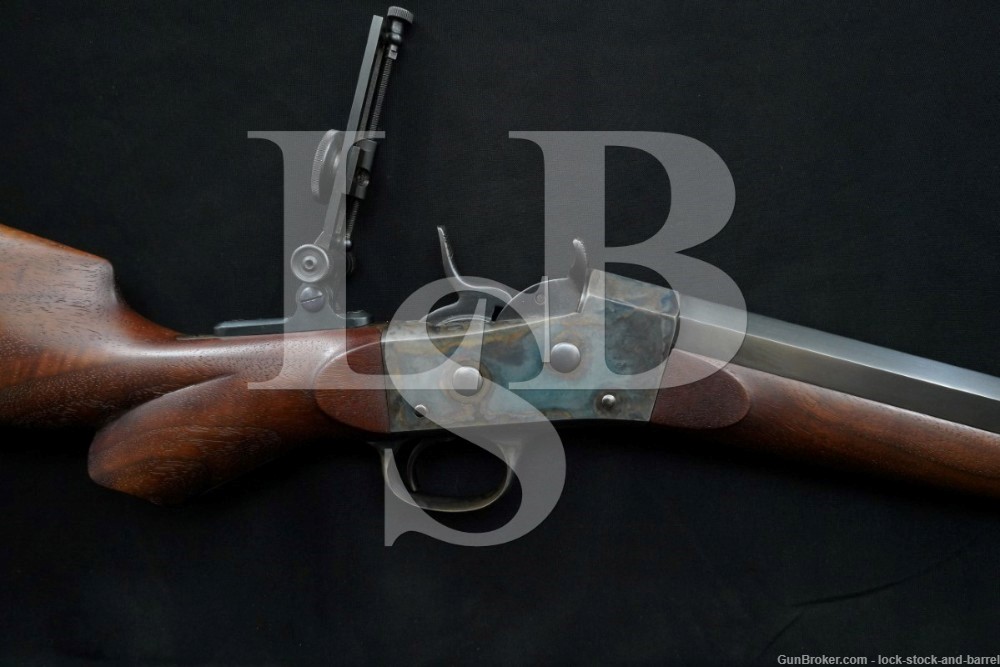 Barrel Length: 29.5”, Half Octagonal and Half Cylindrical

Sights/ Optics: The rifle has a globe-style front sight which features a post dovetailed to the muzzle end of the barrel. The rear sight is an adjustable diopter with aperture sight which is screwed to the top-tang. The top of the barrel has been drilled and tapped for installing an optic (none included).

Stock Configuration & Condition/ Grip: The stocks which are not original to the rifle are two-piece smooth wood featuring a schnable style forend and butt that has a semi-pistol grip, Monte Carlo style comb and rubber Pachmayr butt-pad. The stocks have some light handling marks. Notably, the left side of the butt has some scattered patches of black colored fouling. There are no chips or cracks. The LOP is 13” from the rear end of the butt-pad to the trigger. The butt-pad has some light handling marks. Overall, the stocks are in Very Good condition.

Overall Condition: The rifle retains about 97% of its refinished metal finish. There are some scattered scuffs, nicks and handling marks. Notably, there are some traces of oxidation visible on the refinished breech-block and hammer as well as the bottom tang. The marking remains clear. The screw-heads are serviceable. Overall, the refinished rifle is in Very Good-Fine condition.

Mechanics: The action functions correctly. The hammer is a bit clunky but does lock with a little force. We have not fired this rifle. As with all used firearms, a thorough cleaning may be necessary to meet your maintenance standards.

Our Assessment: This rolling-block appears to be a Whitney Arms Co. make which has been sporterized and is chambered for .38 Extra Long Ballard cartridges. The receiver has none of its original markings present which makes determining the exact age of this rifle a challenge. It has a few scattered patches of oxidation which still are visible despite it having been refinished. The top-tang has no visible markings which makes it unlikely that the rifle was manufactured by Remington. There were other American gun-makers which manufactured rolling blocks in the late 19th century who did not feature tang markings, with one notable example being Whitney Arms Co. The company was founded by the famous inventor Eli Whitney and although he is most well-known for his cotton-gin, Whitney was also a firearms manufacturer. After he passed away, Whitney’s son continued to manufacture firearms during the19th century, and the company made their own rolling block rifles. The Whitney Arms Co. eventually closed its doors in 1880, yet by that time the Whitney family had already left their mark on American history. Good luck on your bid!