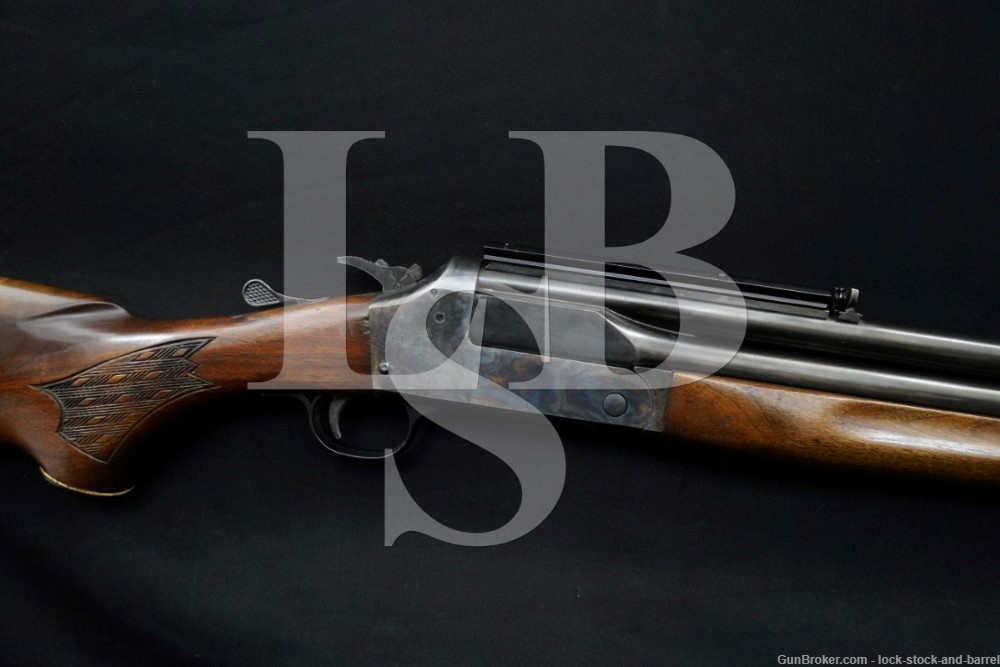 Barrel Length: Both barrels are 24” long.

Choke: The shotgun barrel has a Modified choke.

Stock Configuration & Condition/ Grip: The stocks are two piece smooth wood featuring a checkered forend, checkered semi-pistol grip with cap, a fluted Monte Carlo style comb and brown rubber buttpad. The stocks have some light handling marks, nicks and scuffs. There are no chips or cracks. The LOP is 13 3/4” from the trigger to the rear end of the buttpad. The buttpad has some light handling marks. Overall, the stocks are in Very Good-Fine condition.

Overall Condition: The combination gun retains about 85% of its metal finish. There are some scuffs, nicks and handling marks on the gun’s metal surfaces. Notably, there are small scattered patches of wear on the barrels. The portions of the barrel that have lost their finish have taken a mild patina color from light surface oxidation. The markings remain clear. The screwheads are serviceable. Overall, the gun is in Very Good condition.

Mechanics: The action functions correctly. The barrels lock with no play on the receiver. We have not fired this rifle. As with all previously owned firearms, a thorough cleaning may be necessary to meet your maintenance standards.

Our Assessment: This Savage Model 24V, Series D is an over/under combination gun chambered with a top rifled .357 Magnum barrel and a bottom 20 gauge shotgun barrel. This makes for a very versatile hunting gun that can be used for terrestrial game as well as fowl. The gun originated as the model 22-410 (.22 LR over a .410 bore combination gun) in 1938 and was marketed by Savage under the “J. Stevens” brand. In 1950, Savage rebranded the product as the Model 24 and expanded the caliber and gauge options on the barrels. This rifle had various designations based on the caliber/gauge that was offered. This specimen was manufactured after the Gun Control Act of 1968, evidenced by the serial number on the receiver and was likely manufactured sometime in the late 1970s-early 1980s. The rifle would remain in production until 2010 when Savage discontinued it. This is an interesting combination gun that you do not want to miss out on!