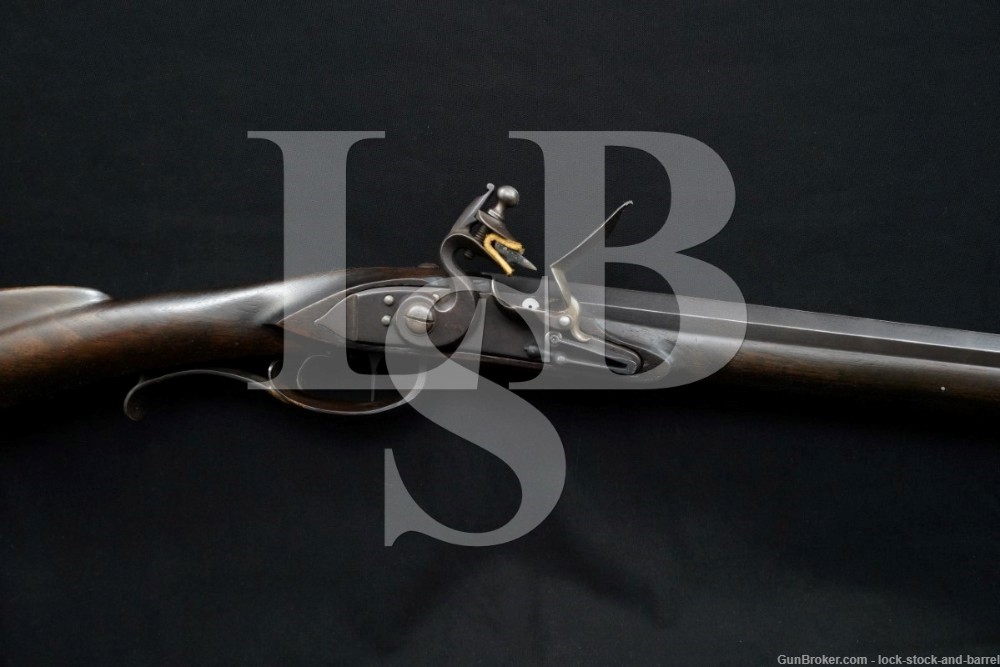 Barrel Length: 44” Octagonal. The Swamped barrel measures approximately .95” at the flashhole, .76” at the center of the barrel and .81” at the muzzle.

Sights/ Optics: The front sight is a dovetailed brass blade. The rear sight is a “V”-notch dovetailed to the rear end of the barrel.

Stock Configuration & Condition/ Grip: The stock is one-piece wood featuring a forend cap, two ferrules, a slot in the forend for the included ramrod, lock-plate, a straight wrist, Monte Carlo style comb and metal semi-crescent buttplate. The stock has some nicks, scuffs, scratches and handling marks. Notably, the left side of the forend has a crack in front of the rear second ferrule and one that is behind it. There is also a ding on the left side of the forend which is a bit ahead of the rear sight. The LOP is approximately 14” from the front trigger and 13” from the set trigger to the rear end of the buttplate. The buttplate has some handling marks. Overall, the stock is in Good condition.

Overall Condition: The rifle retains about 70% of its metal finish. There is finish loss along the leading edges in addition to some patches of finish loss on the buttplate and trigger guard. There are some light handling marks, nicks and scuffs on the metal surfaces of the rifle. There are no visible markings on the rifle. The screwheads remain serviceable. Overall, the rifle is in poor condition due to a mechanical issue but would otherwise rate in about Very Good condition.

Mechanics: The hammer does not properly engage the sear unless the trigger is set. Otherwise, the action functions correctly. . We have not fired this rifle. As with all used firearms, a thorough cleaning may be necessary to meet your maintenance standards.

Our Assessment: This Kentucky Rifle is a .32 caliber flintlock muzzle-loader. The gun appears to have been made by a gunsmith, but who made it is elusive as there are no markings on the rifle. The rifle pays homage to the classic rifled “Kentucky” rifle which were made as both flintlock and percussion rifles during the 18th and 19th centuries. The Kentucky Rifle faded into obscurity towards the end of the 19th century but only for a time. In the late 1960s there was resurgence of interest in blackpowder weaponry and a number of companies and independent gunsmiths began to forge replicas. Interest in such guns has remained high ever since. This rifle was crafted by a skilled gunsmith likely sometime between 1970 and 2000, but it could be older. The rifle should prove a fun addition to any black powder enthusiasts collection. Good luck on your bid!