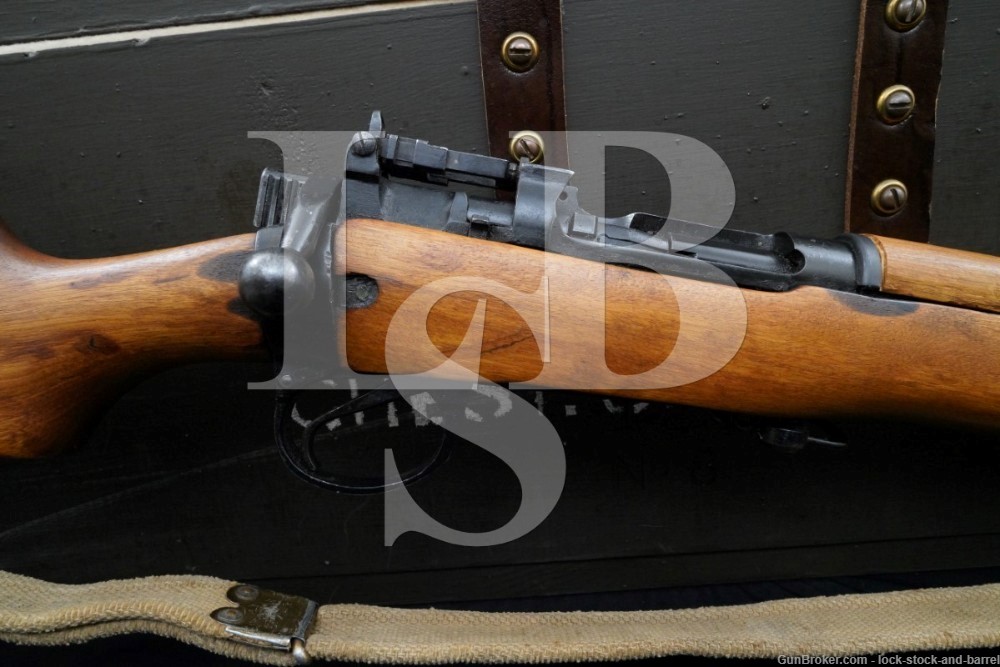 Sights / Optics: The front sight is a bladed post set between 2 protective ears. The rear sight is a fixed aperture when down. It flips up to become a sight ladder that uses an adjustable aperture. The ladder is marked “25 50 100”.

Stock Configuration & Condition: The hardwood stock has a pistol grip, barrel band, 3 sling loops, and a rubber coated metal buttplate. The buttplate shows scrapes, scratches, and a separation along the top. The wood shows a few scrapes & scratches and well as areas of discoloration. The LOP measures 13 ¾ inches from the front of the trigger to the back of the buttplate. The stock rates in about Very Good Plus to Fine overall condition.

Overall Condition: This rifle retains about 90% of its metal finish. The metal shows several scrapes & scratches that have removed areas of the black paint finish. The exposed oil darkened metal shows discoloration from oxidation. The receiver also shows areas of dried oil or grease that should clean up. Some of the screw heads show heavy use. The markings are faded. Overall, this rifle rates in about Very Good Plus condition.

Box, Paperwork & Accessories:  The rifle comes with its wooden transit crate. The white paint markings are bright. The smaller black markings are light. The wood case has metal hinges, metal latches, interior leather attachments, and leather straps for carrying. The wood inside the case holds the rifle in position. It uses wooden inserts to do this. The top & bottom inserts are covered in felt. The top inserts are secured by thin cords so they will not be lost. The wood shows several scuffs, scrapes & scratches. Overall the case is in about Very Good Plus condition. The rifle has a web sling attached. The sling shows soiling, discoloration, and fraying on the webbing as well as oxidation on the metal. Overall it is in about Good condition.

Our Assessment: The British No.8 MkI was initially intended to be used only by the British Army (the Land Service). In 1950 the No8 rifle’s role was expanded to cover all three services. Unlike the other trainers made up to this point, the No8 MkI was designed as a target and competition rifle, instead of a service rifle reduced in caliber. It has a heave barrel, a nice trigger converter to cock on open, and a heavy competition type stock.
This No.8 MkI is in Very Good Plus condition and comes in its wooden transit crate. It will add to your Enfield collection and should do well out at the range. Good luck.