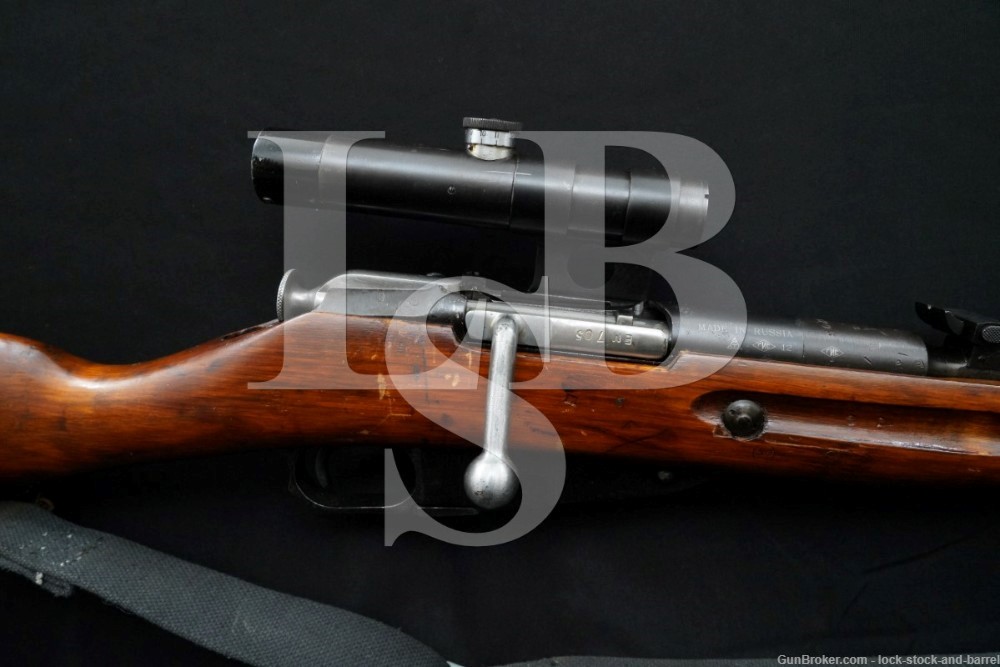 Sights/ Optics: The front sight is a dovetailed post on a ramp with a protective hood. There is also a tangent leaf rear sight with a “U”-notch which is graduated in 100s of meters from 1-20, inclusive. There is an attached PU scope which is mounted on two scope rings which are screw-set to a base that is screwed to the left side of the receiver. The scope has a German style reticle and is adjustable for windage and elevation. The glass is clear on the scope and the reticle is sharp. The scope has some handling wear but remains in Very Good condition. Please note, the scope is not original to the rifle, it was installed during arsenal refurbishment but it is a legitimate PU scope.

Stock Configuration & Condition/ Grip: The arsenal refurbished stocks are two-piece smooth wood featuring a handguard, metal forend cap, slot for the included ramrod in the forend, two barrel bands and their springs on the forend, through bolt, a straight wrist, slightly raised comb and metal buttplate. There is a sling eyelet on the forend behind the front barrel band and a sling eyelet on the butt. The stocks have nicks, scuffs and handling marks. Notably, there is a patch of wear on the right side of the butt and right side of the forend near the receiver. There are no chips or cracks. The LOP is 13.5” from the trigger to the rear end of the buttplate. The buttplate has some handling wear. Overall, the arsenal refurbished stocks are in Very Good condition.

Overall Condition: The rifle retains about 80% of its metal finish. There are some scuffs, nicks and handling marks on the metal parts of the rifle. Notably, the muzzle and buttplate have patches of handling wear. The markings remain clear. The screwheads are serviceable. Overall, the arsenal refurbished rifle is in Very Good plus condition.

Box Paperwork and Accessories: The rifle comes with an installed scope described above and a black sling with two “dog collars” that fix the sling to the eyelets on the stock. The sling has some minor handling wear but remains in very Good condition.

Our Assessment: This Tula Arsenal Model 1891/30 Mosin Nagant, Snayperskaya variant is a bolt-action rifle chambered for 7.62x54R rounds. This rifle is a bit complicated but also unique. The rifle was not imported by the usual American companies, it was proof tested in Tula and exported directly from Russia in 2012. It has modern Russian proofs which is rather uncommon. It is difficult to determine if this rifle was “originally” a sniper variant, its markings have faded from its past refurbishment. Regardless, the rifle was reconfigured into a proper snayperskaya variant at Soviet Arsenal No. 2, in Kiev (modern day Ukraine) likely in 1957 based on the markings. The rifle was acquired by Russia following the collapse of the Soviet Union, and it appears to have languished in Tula until it was cleaned up and  exported in 2012. The rifle has some superficial handling wear but the condition of the rifle indicates it was professionally refurbished. The rifle was used to great effect by Soviet marksmen and women. During the battle of Stalingrad, Vasily Grigoryevich Zaitsev dispatched over 200 German troops, including a number of snipers, with his M91/30 during the epic battle. The M91/30 snayperskaya rifle was not entirely retired after WWII, the Soviet Union exported them to allies including the Korean People’s Army and Viet Cong. This is one rifle you do not want to miss out on!