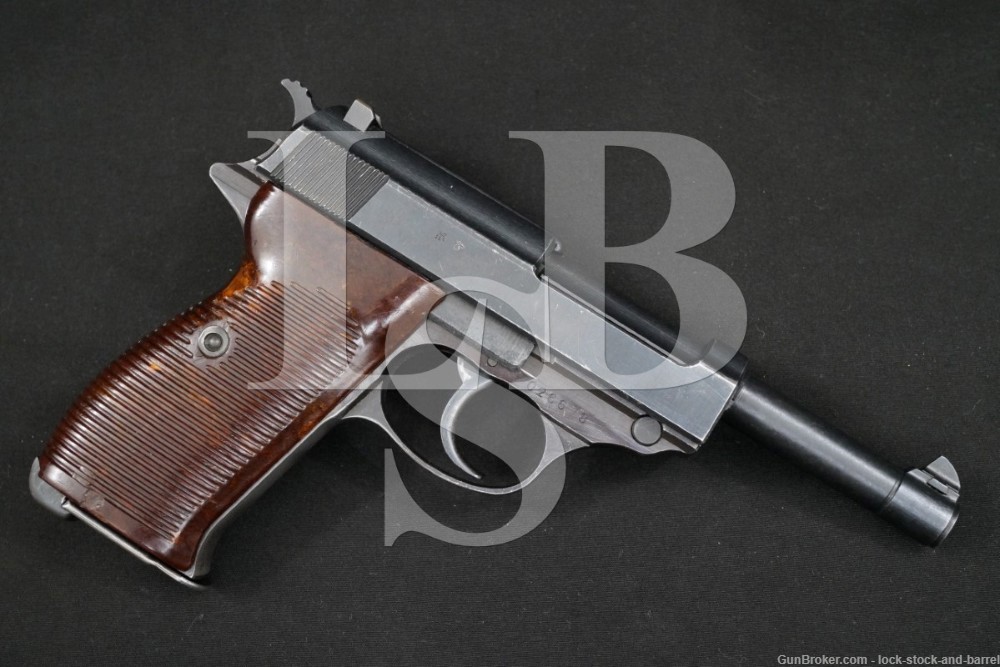 Stock Configuration & Condition: The grips are two-piece serrated brown AEG panels. The grips have minor handling wear with only a few scattered nicks and scuffs, most in the smooth borders. There are a few spots which are a notably lighter brown color, but there is no corresponding wear at these spots. The serrations are well defined. There are no chips or cracks. Overall, the grips are in about Fine condition.

Bore Condition: The bore is semi-bright and the rifling is sharp. There is some scattered light erosion in the bore.

Overall Condition: This pistol retains about 87% of its metal finish. The finish is thinning at most edges. The most notable finish loss is handling wear in the grip areas. There is some light handling wear on the controls. There are some scattered light nicks and scuffs. The frame’s finish has a plum hue, common for this serial range. The action shows light operational wear. The screw head is tool marked with a strong slot. The markings are clear. Overall, this pistol is in about Very Good condition.

Box, Paperwork & Accessories: This pistol comes with a single 8-round magazine marked “P.38v” on the left and on the rear with eagle over “WaA135” and (Mauser production). The magazine has scattered light wear, intact feed lips and a strong spring.

Our Assessment: The P38 occupies a significant place in history. It was the first locked breech pistol to have a single action/double action trigger. It was adopted by the German Army as their standard issue sidearm and continued to be issued after the war in both West and East Germany. This P.38 pistol is a very late-war example made by Walther in 1945. It is from the very last of the P.38 pistols to come off the assembly line before the Walther factory was captured by American forces in April. The pistol shows several characteristics of these very last wartime Walther production including missing inspection marks which were not applied as the guns were considered non-standard, substitute arms. Actual production was halted and pistols were assembled from previously rejected military parts as well as from existing stores of commercial P.38 and HP Model pistols. In order to differentiate the pistols, the serial scheme was changed, adding a “0” to the existing Mod. P.38 serial range and starting around 025815. This example of a Zero-Series ac-45 pistol is in about Very Good condition retaining about 87% of its metal finish. Being produced so late in the war, it doesn’t appear to have seen too much use. It retains a good bore and the mechanics are strong. This will make a great addition to a WWII or P.38 collection as an example of one of the las guns assembled before the Walther factory was captured. Please see our photos and good luck!