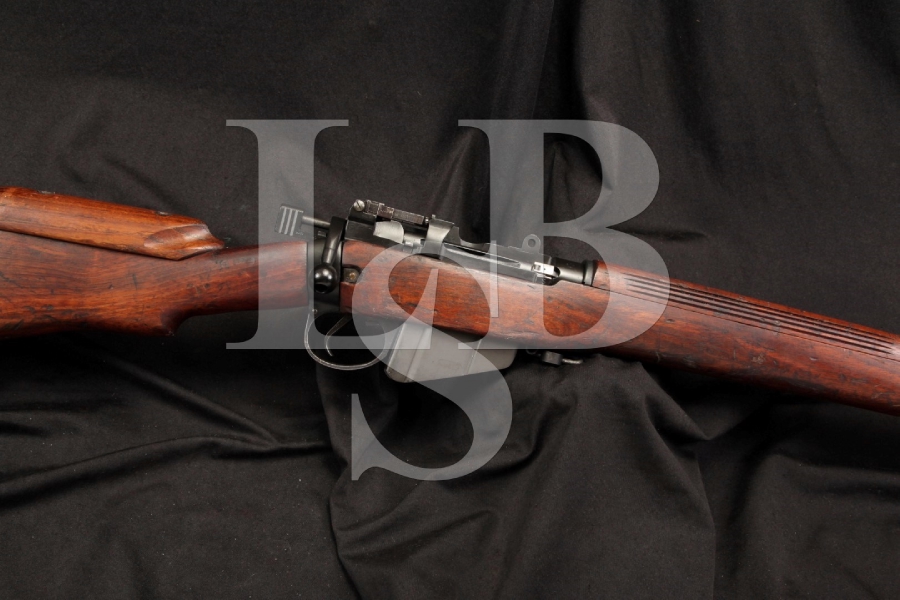 LSB#: 140403BB01
Title: Rare , Enfield No4 MkI (T) .303 British Bolt Action Sniper Rifle, Import Marked – C&R OK
Make: Enfield, BSA Shirley
Model: No4 MkI (T)
Serial Number: B35072
Year of Manufacture: 1944
Caliber: .303 British
Action Type: Bolt Action with Removable Magazine
Markings: The import mark on the top of the receiver reads “ENGLAND”; this area is also marked with a Crown over “P”. The top rear of the receiver is marked with two “crowned” inspection marks and a faded stamp. The left side of the receiver is faintly marked “No4 Mk1” and “T” (signifying a No.32 telescope had been fitted, and the combination had met all inspections). The left side of the stock collar is marked “M47C” (the code for BSA Shirley), “1944”, “B30572” and “TR” (the final inspection proof prior to being upgraded by Holland & Holland). The bottom of the magazine well is marked “A” and “M/47C”. The rear of the bolt handle is marked with the serial number. The cocking handle is marked “M47/C”, “1954”, an arrow, and “2”. Bolt head is marked “1”, “B”, with a circled arrow and with a Crowned Two Flags stamping. The middle barrel band is marked Arrow over “S.126”. The top barrel band is marked “M.B.13”. The face of the front sight is marked “N57”; the top is marked “ROFB +031X”. The front of the barrel is marked “NP .303 ‘2.22’ / 18.5 TON”. The screw for the center sling loop and the top of the buttplate are both marked with an Arrow. The safety is marked ”B”. The top of the grip is marked “17429”; the bottom is marked “SL / N / arrow” and with two “crowned” inspection stamps. The bottom of the butt is marked “S51” (a Holland and Holland mark). The underside of the forearm is marked “SL / N / 74” and “30572”. The magazine follower is marked with an inspection stamp.
Barrel Length: Approximately 25 1/8”
Sights / Optics: The front sight is a blade set between two protective ears. The rear sight is a flip up sight ladder marked from “2 – 13”. The top of the sight ladder is marked “N67” and the left side is marked “SM”. There is no rear sight when the ladder is down due to the scope. The left side of the receiver has two threaded holes for accepting the screws from the scope base.
Stock Configuration & Condition: The four piece hardwood stock has a straight grip, raised check piece, serrated upper hand guard, nose caps, two barrel bands, three sling loops, and a metal buttplate with hinged door for storage. The raised cheek piece is secured by two screws. There are several deep scrapes, scratches and compression marks. The deepest are on the bottom of the wood. Some have removed the surface of the wood. The LOP measures 13 1/8” from the front of the trigger to the back of the buttplate. The stock rates in about Very Good overall condition.
Type of Finish: As Military Applied
Finish Originality: Refinished During Sniper Upgrade
Bore Condition: The bore is semi-bright; the rifling is deep and sharp. There is very light erosion near the muzzle.
Overall Condition: This rifle retains about 90% of its current metal finish. The front of the barrel is faded and shows two small areas of pin prick surface erosion. The nose caps and barrel bands are scratched and worn. The sling loops are worn. The buttplate is scratches and worn. The trigger guard shows light marks. The screw heads show light use. The new markings are deep; some of the old markings are faded. Overall, this rifle rates in about Very Good Plus condition, as refinished.
Mechanics: The action functions correctly. We have not fired this rifle.
Box, Paperwork& Accessories: The rifle comes with a 10-round magazine that shows light wear and light scratches. It is in about Very Good Plus condition.
Our Assessment: This rifle started out as an Enfield No.4 Mk1 made at BSA Shirley. It was selected for its inherent accuracy and then sent off to Holland & Holland to be upgraded to a sniper. It does not come with its scope, but we are sure the new owner of this rifle will be looking for the proper scope very soon. For an article on the process of taking a No4 Mk1 and making it into a sniper, please see: http://www.allaboutenfields.co.nz/links-resouces/articles/from-no4mk-i-t-l42-ai/. Good Luck.