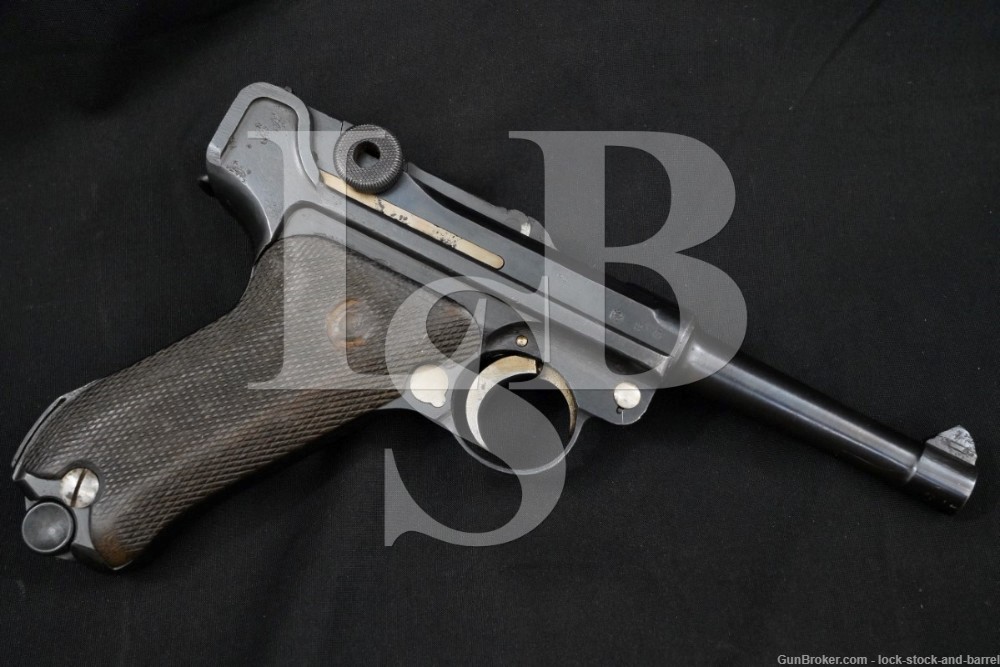 Markings: The barrel extension is marked “1936” on the chamber ring, the left is marked “7152”. The takedown lever is marked “52”, found again on the trigger, safety, breech-block, top of the front toggle link, rear of the back toggle link, the toggle pin, the bolt stop, and the sear. The top of the front link is also marked “S/42” (Mauser production code). The extractor is not serial marked, the firing pin is marked “30”. The left of the extractor is marked “GELADEN”. The front face of the frame is marked “7152”. The left of the breech-block has an eagle inspection mark. The right of the barrel extension has an eagle over “63” waffenamt, an eagle inspection mark and another inspection mark obscured by erosion.

Stock Configuration & Condition: The grips are two-piece checkered walnut. The grips have moderate handling wear with scattered nicks, scuffs and scratches. There is a more notable circular compression on the right panel near the top. The checkering has some areas worn smooth with much well defined. The left panel has a chip-loss at the top-rear behind the safety. There are no cracks. Overall, the grips are in about Good condition.

Finish Originality: Refinished. Based on some parts missing serial-markings and the non-matching striker, it is not clear if some parts have been replaced or force-matched.

Overall Condition: This pistol retains about 92% of its current metal finish. The new blue finish is generally strong with handling wear in the strawed controls. There is scattered light-moderate erosion and pitting, mostly under the finish. There are a few light nicks and scratches. The action shows light operational wear. The screw heads are lightly tool marked with strong slots. Remaining markings range from clear to obscured by erosion. Some markings have been removed, most notable on the barrel. Overall, this pistol is in Good condition as refinished.

Box, Paperwork & Accessories: This pistol comes with a single 8-round magazine. The magazine has light operational wear, damaged feed lips and a strong spring.

Our Assessment: The Luger (Pistole Parabellum or P-08) is perhaps the most aesthetically and ergonomically pleasing of all autoloading centerfire pistols. It is also one of the strongest, most accurate and most recognizable service pistols ever made. Georg Luger developed his famous pistol in 1898-1899 (starting with the Borchardt/Luger transitional pistol). The Luger is, essentially, a much improved Borchardt type pistol, which was itself based on the toggle action concept used by Sir Hiram Maxim in the world’s first practical machine gun. The Luger was so reliable and well liked that it was still being made and issued to German troops well after the P38 was adopted by the army. The largest percentage of Lugers were made by DWM, which became Mauser in 1930. This is a Mauser Luger pistol manufactured in 1936, just after the Nazis began to openly violate the Versailles treaty. The pistol is in about Good condition as refinished, with about 92% of its current finish remaining over scattered erosion and pitting. This would make a neat addition to a collection missing a Luger and would be a good candidate for restoration. Please see our photos and good luck!