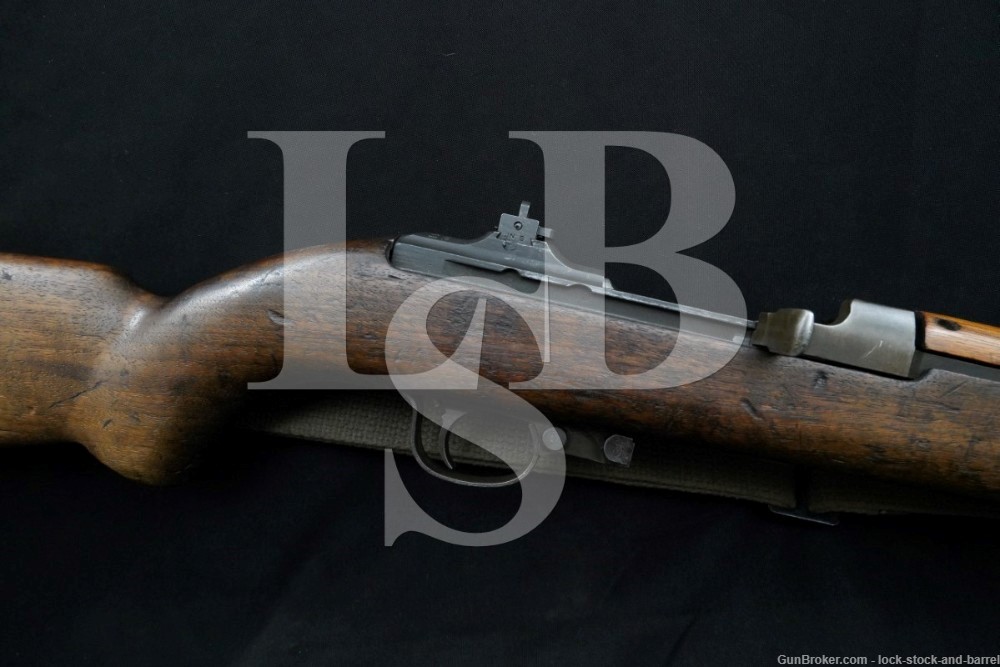 Sights / Optics: The front sight is a post set between two protective wings. The rear sight is a Type I flip up, dual aperture assembly.

Stock Configuration & Condition: The hardwood stock has a pistol grip, Type IA barrel band with sling loop, sling well, sling pass through, and a metal buttplate. The buttplate shows scrapes & small dings on the edge as well as thinning. The top of the grip shows a small hairline surface crack. The wood shows numerous scrapes, scratches and compression marks. Several have damaged or removed small portions of the surface wood. The replacement handguard is a lighter color. The left side of the butt shows paint residue. The LOP measures 13 ¼ inches from the front of the trigger to the back of the buttplate. The stock rates in about Good to Very Good overall condition.

Bore Condition: The muzzle & grooves are grey and the rifling is deep. There is erosion in the grooves at the muzzle. The bore shows an M.E. of 3.

Overall Condition: This rifle retains about 90% of its metal finish as refinished. The barrel and receiver have been coated with cold blue. The exposed portion of the barrel shows thinning and has a freckling of light surface erosion bleeding through the cold blue finish. The left side of the receiver shows scrapes & thinning under the wood. The metal shows several scrapes and thin scratches. The right side of the receiver shows thinning consistent with cycling. Most of the markings are deep. The barrel markings are well defined. Overall, this rifle rates in about Very Good condition as refinished.

Box, Paperwork & Accessories: There is No magazine. The rifle comes with a green canvas sling. It shows light soiling on the canvas. Overall it is in about Fine condition.

Our Assessment: The International Business Machines Corporation (IBM) was one of several contractors who tooled up during WWII to produce M1 Carbines in support of the war effort. IBM only produced about 5.7% of the total number of WWII M1 Carbines. IBM’s low production numbers make IBM M1 Carbines quite desirable.
This IBM M1 Carbine was made back in 1943. After WWII it served for a U.S. friendly country and was eventually imported back into the U.S. for sales to the civilian market. The rifle has been refinished but the metal parts still have nice markings. This M1 Carbine uses mostly IBM parts including an “I.B.M. CORP.” marked barrel.