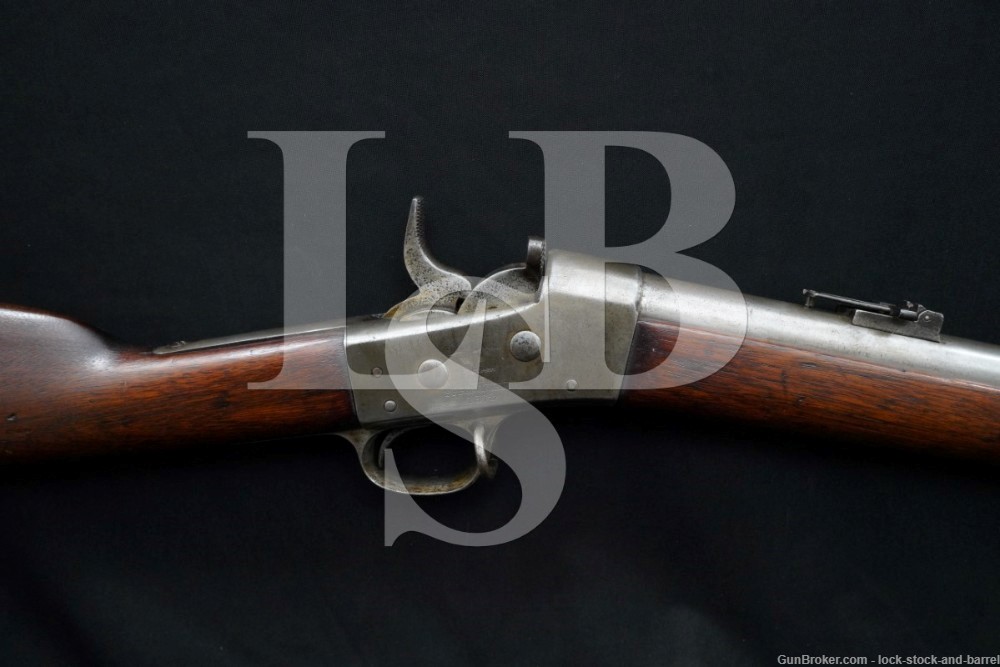 Markings: The left side of the receiver is marked “MODEL 1871”. The right side of the receiver is marked with a faded Great Seal of the United States (an Eagle with a shield holding arrows with its talons) and “U.S. / SPRINGFIELD / 1872”. The buttplate is marked “U.S.” The barrel bands are marked with a “U”. The left side of the wrist has a cartouche marked “ESA” which are the initials of Erskine S. Allen who was the Master Armorer at Springfield Armory. The top tang has a faded Remington patent marking.

Sights/ Optics: The front sight is a blade fixed to the muzzle end of the barrel.  The rear sight is a ladder which presents a square-notch in the down position. When raised there is a slider with a “V”-notch and the top of the sight has an integral “V”-notch. The ladder is marked “2”, “3”, “5”, “7” and “9”.

Stock Configuration & Condition/ Grip: The stocks are two-piece smooth wood featuring a forend with a cap, a slot for the cleaning rod, two barrel bands with their springs and a butt with a straight wrist, straight comb and metal semi-crescent buttplate. The stocks have some handling marks, nicks and scuffs. Notably, there is a small crack at the heel of butt by the buttplate. The LOP is 13.5” from the trigger to the rear end of the buttplate. The buttplate has some handling wear and is coated in surface oxidation. Overall, the stocks are in Very Good condition for Antiques.

Bore Condition: The bore is mostly bright with sharp rifling. There is minor erosion in the bore concentrated in the grooves.

Overall Condition: The rifle has only trace metal finish and it is largely in the white. There are scattered patches of surface oxidation on the metal parts of the rifle with the heaviest concentration on the buttplate. There are also some small nicks, scuffs and handling marks on the metal parts of the rifle. There are some trace patches of the case hardened finish on the receiver but it has largely worn off. The Great Seal of the United States (Eagle) on the right side of the receiver and Remington patent stamp are faded but the other markings remain clear. The screwheads are serviceable. Overall, the rifle is in Very Good condition for an Antique.

Our Assessment: This Springfield Arsenal Model 1871 is a single-shot rolling-block rifle chambered for .50-70 Government cartridges. The US Army Model 1871 Rifles were manufactured in the government-run Springfield Armory, but they proved costly due to royalties the government owed to Remington. The rifle’s performed well during their trials but only a small number were manufactured and cheaper alternatives were selected for military service over the costly Remington rolling blocks. The rifle’s case hardened receiver is now in the white with the rest of the rifle but it remains aesthetically pleasing and mechanically sound. This is an Antique rifle you do not want to miss out on!