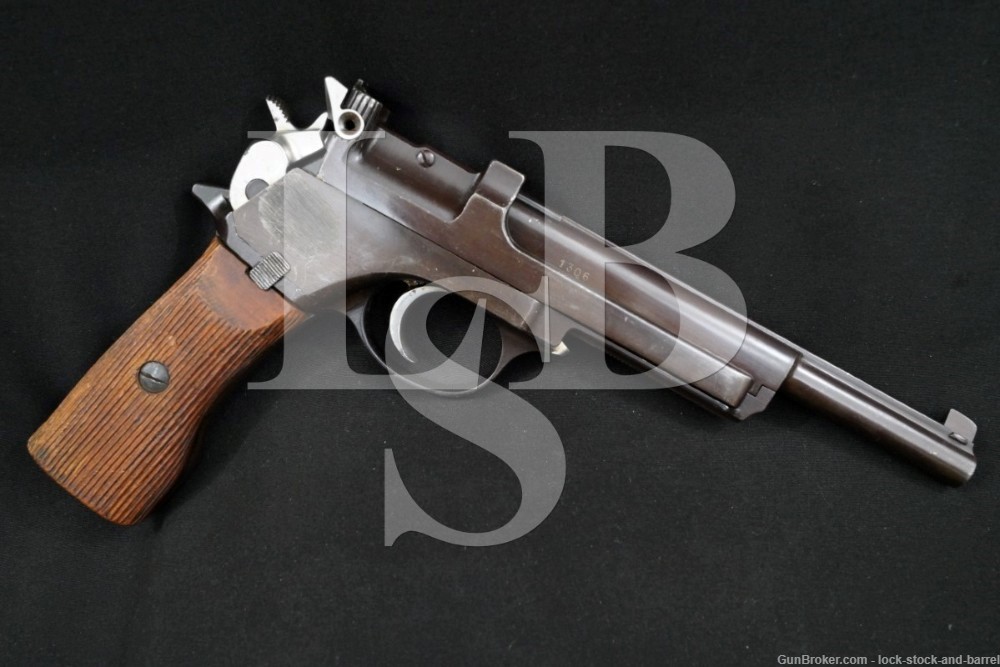 Stock Configuration & Condition: The grips are two-piece serrated wood panels. The grips have light handling wear with some scattered nicks, a few dings and scratches. The left panel shows discoloration from age and oil. The right panel is noticeably brighter and does not fit as well as the left, indicating it is a replacement. The serrations are generally well defined. There are no chips or cracks. Overall, the grips are in about Very Good condition.

Bore Condition: The bore is gray and the rifling is well defined. There is scattered light-moderate erosion and light pitting in the bore, mostly in the grooves.

Overall Condition: This handgun retains about 90% of its current metal finish. The finish is generally strong throughout. There are some scattered light nicks, scuffs, scratches and edge-thinning. The most notable wear is at the leading edges of the slide’s arms and the patch on the right of the action cover where the Argentinian crest was removed. There finish shows a plum hue. The screw heads are tool marked with strong slots. The markings are clear, the serial markings on the bottom of the action cover have a gold paint-fill and there are remnants of paint fill in other markings. Overall, this pistol is in Good-Very Good condition as refinished.

Our Assessment: The Mannlicher Model 1905 was the end of a long series of pistol designs by Ferdinand von Mannlicher, slightly larger than the earlier 1901 Model. It is a slightly delayed blowback pistol with an external hammer, single action, and fed from a 10-round internal magazine loaded with stripper clips. This example was made for the Republica Argentina, one of the larger purchasers of the model, designated the Modelo 1905. This example has had its Argentine crest removed, as is very common with this model, but still retains an “RA” acceptance mark on the frame. The primary components, barrel, slide, frame and action cover have matching serial numbers, but some of the small parts and one of the grips have been replaced. The pistol retains strong mechanics and is in good shape considering its age. This is a nice example of a fairly scarce pistol, and would be a great addition to a collection of early semi-automatic military pistols. Please see our photos and good luck!