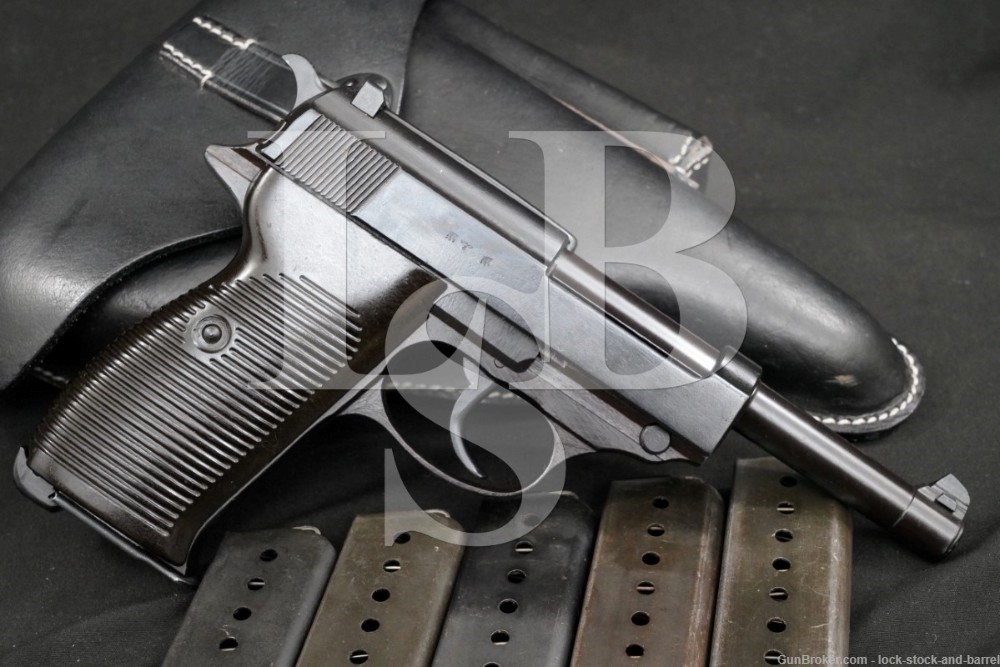 Action Type: Single or Double Action Semi-Auto with Removable Magazine. This pistol has a de-cocker safety.

Stock Configuration & Condition: The grips are two-piece serrated panels, the black left panel AEG produced, the brown right Julius Posselt. The left panel shows chemical erosion as from handling or cleaning solvents and has a vertical scratch in front of the grip screw. The right panel shows lighter handling wear with some scattered scuffing and handling marks. The serrations are well defined. There are no chips or cracks. Overall, the grips are in about Good-plus condition as not original to the gun.

Finish Originality: Refinished, the slide and barrel are not original to the frame.

Bore Condition: The bore is semi-bright with sharp rifling. There is some light erosion in the bore, mostly in the grooves.

Overall Condition: This pistol retains about 97% of its current metal finish. The new finish is generally strong throughout. There is some scattered minor surface erosion under the finish, mostly in the slide but with some on the barrel. There are some scattered nicks and scratches, most under the finish. The action shows minor operational wear. The screw head is tool marked with a serviceable slot. The markings are generally clear, some are worn, but legible. Overall, this pistol is in Very Good condition as refinished and assembled.

Mechanics: The action functions correctly. It has a decocker safety on the left side of the slide. The slide has light play to the frame. We did not fire this pistol. As with all used firearms, a thorough cleaning may be necessary to meet your maintenance standards.

Box, Paperwork & Accessories: This pistol comes with a reproduction black leather flap holster and a total of six 8-round magazines. The holster is marked “dvr / 42”, eagle over “WaA170” and “P38”. The holster shows minimal wear with intact stitching. Each magazine is marked on the left with a Walther banner logo over “P38 9mm”. Four of the magazines are marked on the spine with “1005-12-120-0892” and with a Bundeswehr inspection mark, having the date codes “11/57”, “4/58”, “1/59”, and “6/60”, respectively. One magazine has “12-120-0892” and a Bundeswehr marking on the spine with date code “8/63”. The last magazine has no spine marking. This last magazine has strong blue finish with minimal wear. The other magazines have a mixture of military blue and phosphate finishes, showing light-moderate operational wear, and some scattered minor oxidation. All of the magazines have intact feed lips and strong springs.

Our Assessment: The P.38 occupies a significant place in history. It was the first locked breech pistol to have a single action/double action trigger. After the start of WWII, Walther could not keep up with the production required, and production was ordered to commence at both Mauser and Spreewerke in 1940. By the end of the war, Walther had only produced about 580,000 of the 1.2 million produced. This example has a fairly early production Walter barrel which has been matched to a Mauser frame and a 1942 production Walther slide. Because the same serial scheme was used in 1943 and 1944, differentiated by the code marking on the slide, we do not know which year the frame was produced by Mauser. This pistol has been refinished, so it looks great, and it retains a good bore and strong mechanics. It doesn’t hurt that it also comes with a nice reproduction holster and a half-dozen magazines! No collection of WWII small arms would be complete without a P38 made by each of the three manufacturers, and many collectors have one from each year that they were made by each of the three manufactures, in addition to most of the common variants. This pistol would make for a fun shooter, but its interesting mix of parts may also attract collectors looking for that ac-code marked barrel or other parts. Please see our photos and good luck!