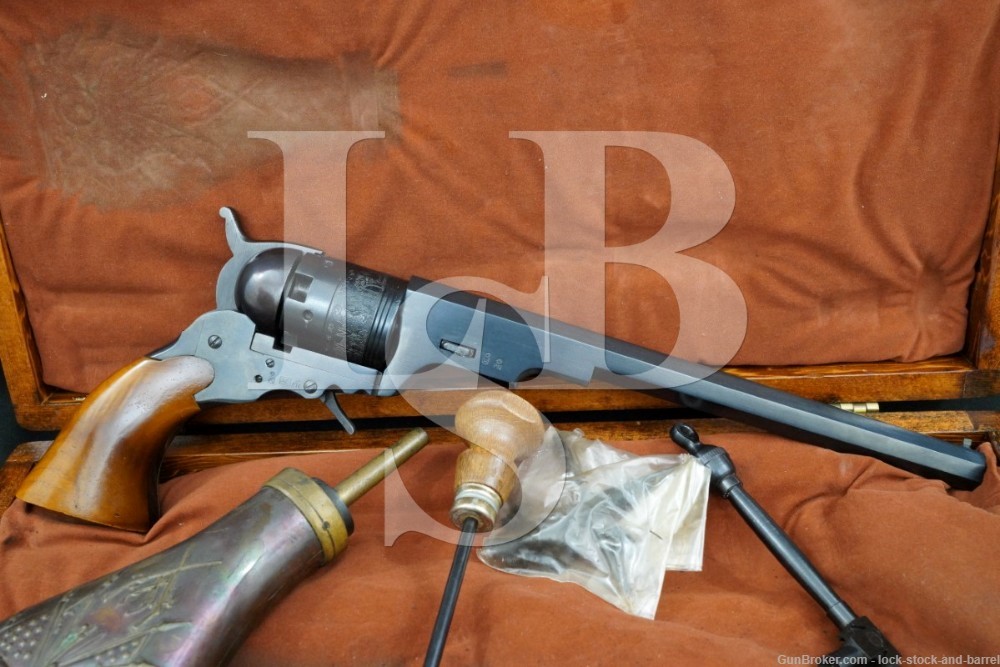 Sights/ Optics: The front sight is a blade fixed to the muzzle end of the barrel. The rear sight is a “V”-notch integral to the hammer which can be used when the hammer is cocked.

Stock Configuration & Condition/ Grip: The grip is one-piece smooth wood. There are some light handling marks, small nicks and scuffs. There are no chips or cracks. Overall, the grip is in Very Good condition.

Overall Condition: The revolver retains about 97% of its metal finish. There are some light handling marks but the revolver lacks any notable defects on its metal surfaces. The markings remain clear. The screwheads are serviceable. Overall, the revolver is in Fine condition.

Mechanics: The action functions correctly. The single-action trigger is crisp. The cylinder locks with barely perceptible play on each chamber. To fire the revolver one needs to bring the hammer to the half-cocked position which will release the folding trigger, then the trigger needs to be pulled out, fully cock the hammer and depress the trigger. We did not fire this revolver. As with all previously owned firearms, a thorough cleaning may be necessary to meet your maintenance standards.

Box Paperwork and Accessories: The revolver comes with a wood case, a screwdriver and several spare screws, a brass black-powder flask, a Patterson specific screwdriver/pricker and cleaning rod with wood handle. The case has some handling wear but remains in Very Good condition.

Our Assessment: This Navy Arms replica of the Colt Paterson is a .36 caliber single-action percussion revolver. The Colt Patterson was the brainchild of Samuel Colt who invented the revolver in 1836, it was named after Paterson, New Jersey where it was originally manufactured. The revolver has a unique design with a folding trigger that was engaged when the hammer was brought to the half-cocked position. The original production of the revolver was moved from Paterson to Hartford, Connecticut in 1847. The new facility was staffed with skilled German artisans who would engrave the pistols with fine scrollwork which included human and animal figures. Some of the pistols were enhanced with gold and silver inlay which were made for exhibition and display, some of which were presented as gifts to prominent individuals (such as heads of state) whom Colt sought to establish contracts with. The Paterson revolver’s influence can be observed on later Colt revolvers all the way through the Model 1860 Army, although the later models all improved upon the design. This replica pays homage to the classic revolver with a pleasing blue finish and it remains mechanically sound. Good luck on your bid!