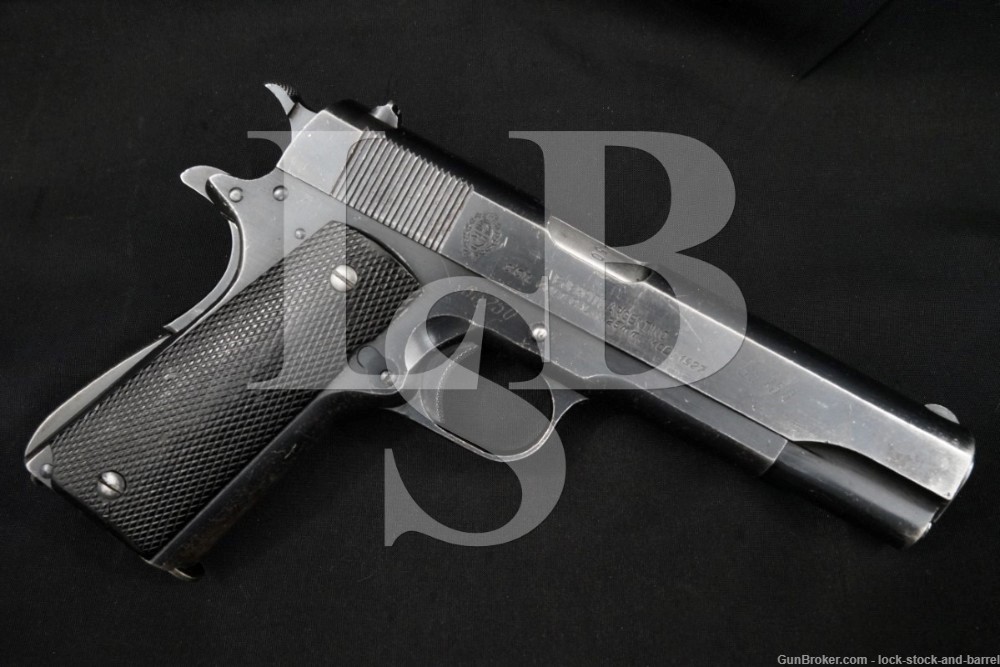 Stock Configuration & Condition: The grips are two-piece checkered black hard rubber with Industria Argentina markings on the inside of the right panel and reinforcement rings around the grip screws on the left panel. The grips have scattered handling wear with light nicks, scratches and scuffs. There are light tool marks around the screws. There is a crack in the right panel from the bottom edge to the bottom grip screw. The checkering is generally well defined. There are no chips. Overall, the grips are in about Good condition as at least partially not original to the gun.

Overall Condition: This pistol retains about 85% of its current metal finish. The finish is thinning at most edges. There are scattered nicks, scuffs and scratches, with some under the finish. There are tool marks around the slide stop on the right of the frame and an “idiot mark” under the slide stop on the left. There is some scattered finish wear, mostly handling wear in the grip areas and on the left slide flat. The action shows operational wear. The screw heads are tool marked with strong slots. The markings are generally clear, the serial markings on the frame and the right of the slide are shallow, but legible. Overall, this pistol is in Very Good condition as refinished.

Mechanics: The action functions correctly. It has both a manual and grip safety and the trigger pull is crisp. The slide has light play to the frame. We did not fire this pistol. The pistol has a lanyard ring on the bottom of the mainspring housing.

Box, Paperwork & Accessories: This pistol comes with one 7 round magazine marked with an “F” in oval and “21077” on the floorplate. The magazine has scattered light wear, a cluster of nicks on the spine, worn areas showing treatment with cold blue, intact feed lips and a strong spring.

Our Assessment: In 1914, the Argentine military adopted the Colt M1911 as their standard military sidearm and contracted with Colt to supply these guns. Argentina took shipment of 2,151 of these weapons between 1914 and 1919. In 1923, Argentina adopted an armaments bill that would eliminate Argentine dependency on foreign arms. Under this bill, the Argentine Congress authorized appropriations for a military modernization program and prepared the infrastructure for a domestic arms industry. In accordance with the new law, an aircraft factory was established in 1927, a munitions factory in 1933, a small steel mill in 1934, and a small arms factory in 1936, all of which were managed by Argentine army officers. In 1927, the Argentine Commission for Foreign Acquisitions negotiated a contract with Colt for the manufacture of M1911A1 .45 caliber self-loading pistols specially marked and serial numbered in a separate series, and secured a licensing agreement giving the Argentine government the right to manufacture these pistols using drawings, material specifications, instructions, etc. supplied by Colt. The 10,000 pistols were delivered by Colt from 1927 to 1933, and have become known as the Hartford Colts. Production of the Sistema Colts began in 1927, and 14,000 were produced by 1942. In 1945, a new factory (FMAP) was brought on-line and produced another 88,494 pistols through 1966. The Sistema Colts continued to be used in Argentina until the 1990’s, when they were replaced by Browning High Powers. The Sistema Colts were not Colt clones, but except for finish and markings, they were identical to 1911A1 pistols produced by Colt, and the parts were interchangeable. Top quality steel was used in the construction, and they are known to be as tough and reliable as those made by Colt. This pistol was made at the FMAP factory in 1952 and was issued to the Argentine Army. The pistol shows wear consistent with an issued service pistol, but has much of its new finish remaining, likely from an arsenal refurbish. The pistol retains a decent bore and strong mechanics with serial matching parts, though the magazine and grips are replacements. The high quality of the Sistema Colts and the relatively few produced make them very collectable, and they’re an interesting variant of the classic 1911 design. Please see our photos and good luck!