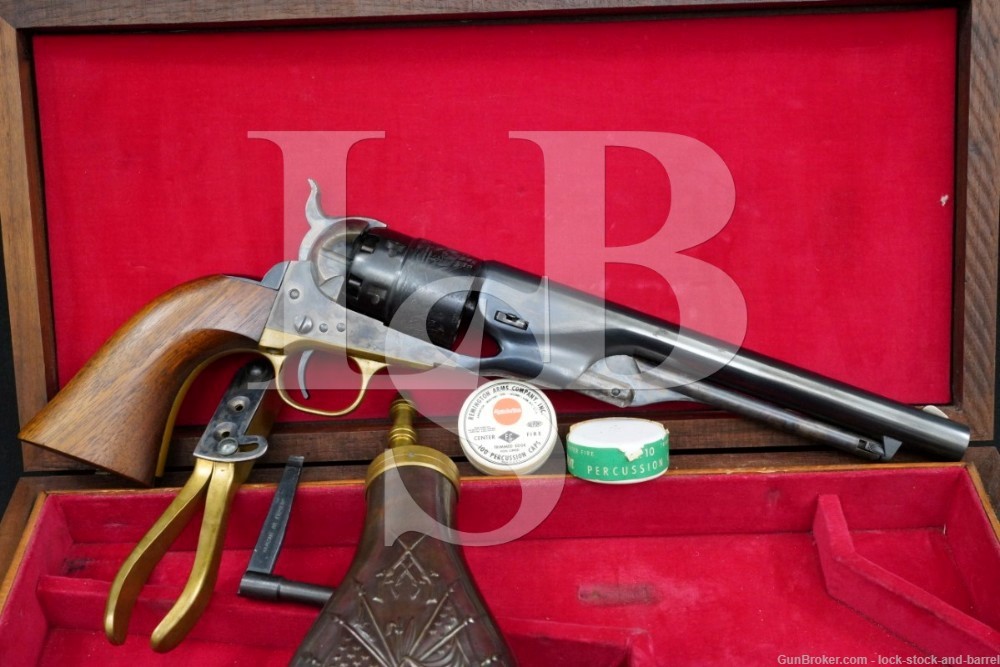 Markings: The left side of the frame is marked “COLT’S / PATENT / U.S.” The top of the barrel is marked “ADDRESS COL. SAML COLT NEW-YORK U.S. AMERICA-”. The cylinder is marked “PATENT NBo. 866”, features a depiction of the Battle of Campeche between the Republic of Texas and Mexico, “ENGAGED 16 MAY 1843”,  “Engraved by W.L. Ormsby New York”. The bottom of the barrel, receiver and trigger-guard all feature the serial number “206866”. The butt-strap also features the serial number.

Sights/ Optics: The front sight is a brass blade fixed to the muzzle end of the barrel. The rear sight is a “V”-notch integral to the hammer which can be used when the hammer is cocked.

Stock Configuration & Condition/ Grip: The grip is one-piece smooth wood. There are some light handling marks but the grip lacks any notable defects. There are no chips or cracks. Overall, the grip is in Very Good condition.

Overall Condition: The revolver retains about 93% of its metal finish. There are some light handling marks, scuffs and nicks. Notably, there are a few small scattered patches of surface oxidation. The markings remain clear. The screwheads are serviceable. Overall, the revolver is in very Good condition.

Mechanics: The action functions correctly. The single-action trigger is crisp. The cylinder locks with barely perceptible play on each chamber. We did not fire this revolver. As with all previously owned firearms, a thorough cleaning may be necessary to meet your maintenance standards.

Box Paperwork and Accessories: The revolver comes with a wood case, two containers with percussion caps, a nipple wrench, a brass black powder flask and a brass two cavity black powder mold by Euroarms. The case has some handling wear but remains in Very Good condition.

Our Assessment: This Colt manufactured replica of the company’s classic Model 1860 Army is a single-action .44 caliber percussion revolver. The original Model 1860 was introduced just a year before the United States descended into civil war. Samuel Colt’s primary customer was the U.S. government which purchased over 129,000 of them for military use. The gun would become the most widely used revolver of the American Civil War. The revolver packed more punch than the older Model 1851 Navy, but was similar in most ways including the omission of a top-strap. This particular replica has the historically accurate rebated style cylinder, although there were several other styles that were used with the revolver. This replica has a beautifully executed finish and remains mechanically sound. This revolver is a nice way to pay homage to an American classic. Good luck on your bid!