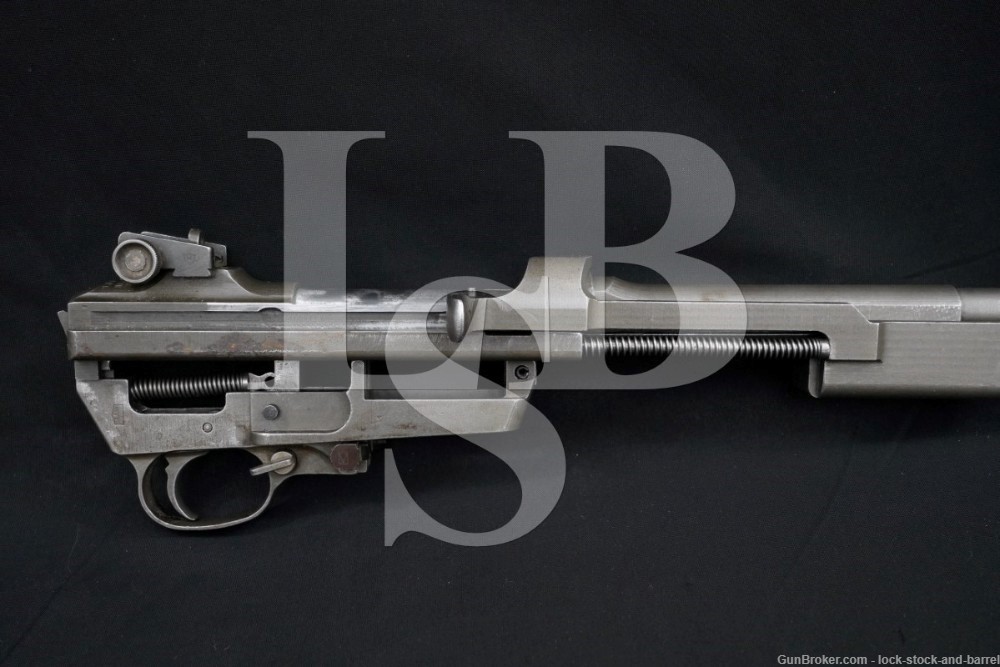 Year of Manufacture: ATF MODERN. January to March, 1944 (page 29 of Scott Duff’s book The M1 Carbine Owner’s Guide). No Barrel Date
https://www.atf.gov/firearms/qa/what-firearms-are-considered-be-curio-and-relic-firearms
“ATF has recognized only complete, assembled firearms as curios or relics…Frames or receivers of curios or relics are not generally recognized as curios or relics.”

Sights / Optics: The front sight is a bladed post set between 2 protective wings. The rear sight is a Type II adjustable aperture assembly.

Overall Condition: This barreled action retains about 87% of its metal finish. The bottom of the barrel shows discoloration where the import mark has been covered with what appears to be a spray on filler. The metal shows scrapes, small scratches, thinning on the leading edges of the metal, and areas of discoloration. The right side of the receiver shows light surface erosion. The right side of the receiver and bolt shows thinning consistent with cycling. The markings are deep. Overall, this barreled action rates in about Very Good condition.

Mechanics: The trigger housing pin is missing. A roll pin is being used to hold the trigger group to the receiver.
The action functions correctly. We did not fire this barreled action. As with all used firearms, a thorough cleaning may be necessary to meet your maintenance requirements.

Box, Paperwork & Accessories: There is No magazine. See photos to visually confirm what is included in the auction.

Our Assessment: This barreled action started life back in 1944 as National Postal Meter M1 Carbine. After WWII it served in a U.S. friendly country and was eventually imported back into the U.S. for sales to the civilian market. Most of the import mark has been covered. This barreled action needs a trigger housing pin and a stock to be a complete M1 Carbine. It still has a strong bore and should be a lot of fun to shoot after you add a few parts. Good luck.