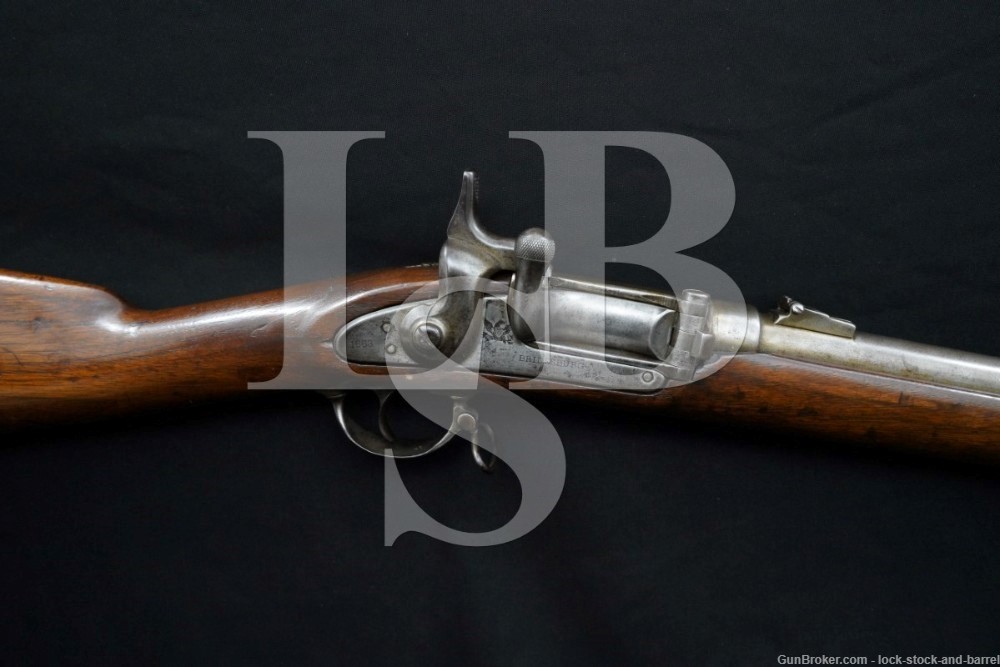 Markings: The lock plate is marked with the Springfield Eagle, “1863”, and “Bridesburg”. The right side of the buttstock is marked with a hand-scribed “XIX”. The comb is marked “50”.

Sights/Optics: The front sight is a blade pinned to a rectangular base set on the barrel. The rear sight is a two-leaf semi-buckhorn square-notch.

Stock Configuration and Condition: The stock is a one-piece smooth walnut with nose cap, ramrod groove (ramrod is included) three barrel bands, straight grip, straight comb, and a steel butt plate. There is a sling swivel on the front of the guard and one on the mid-barrel band. There are scattered light dings and compressions throughout. While there are a few nicks that appear new, nearly all marks are older and oiled over. The LOP measures 13 1/2” from the front of the trigger to the back of the buttplate. The plate has moderate surface oxidation throughout along with moderate scuff wear at  the heel and toe. Overall, the stock rates in Good condition, as antique.

Bore Condition: The bore is mostly dark, but the rifling is well-defined. Spots of light erosion can be seen dotted throughout, and moderate stubborn fouling persists throughout.

Overall Condition: This rifle retains about 0% of its metal finish. The barrel and receiver have light surface oxidation throughout. The forward three inches of the barrel are bright. The barrel itself has scattered minor nicks and minor dings. The screw heads are lightly tool marked with usable slots. Markings are clear. Overall, this rifle rates in Good condition, as antique.

Our Assessment: If you were a member of a secret society hellbent on achieving independence for Ireland who was suffering under the thumb of Britain, you’d need a weapon, right? The Fenian Brotherhood was such a secret society, and they did seek to—multiple times—invade Canada to exert political influence over Britain, and this was one of the weapons they used. This group was tenacious, having succeeded, failed, been imprisoned, had their weapons seized (and bizarrely returned) in their efforts to invade Canada. It’s terribly difficult to imagine such a thing today, but Post-Civil War America was assuredly a wild place, and this rifle is a link to that incredible time. These rifles were converted from Model 1861 and 1863 muskets, primarily Bridesburg muskets—the majority of the converted rifles have lock plates bearing that name, as is the case of this one. The conversions took place in secret in Trenton, NJ, and the Fenians would go on to invade Canada in 1866 and 1870. They were ultimately unsuccessful.

This example has all the tell-tale wear commonly seen on musket conversions and Civil War era arms—dark bores, a lot of oxidation and erosion, fouling, etc. On the other side of the coin, these rifles are generally mechanically sound, made as they were for battlefield and conditions such as… invading Canada! This is an incredibly fascinating rifle, with a story that is incredibly hard to believe, and yet…! Good luck and happy bidding!