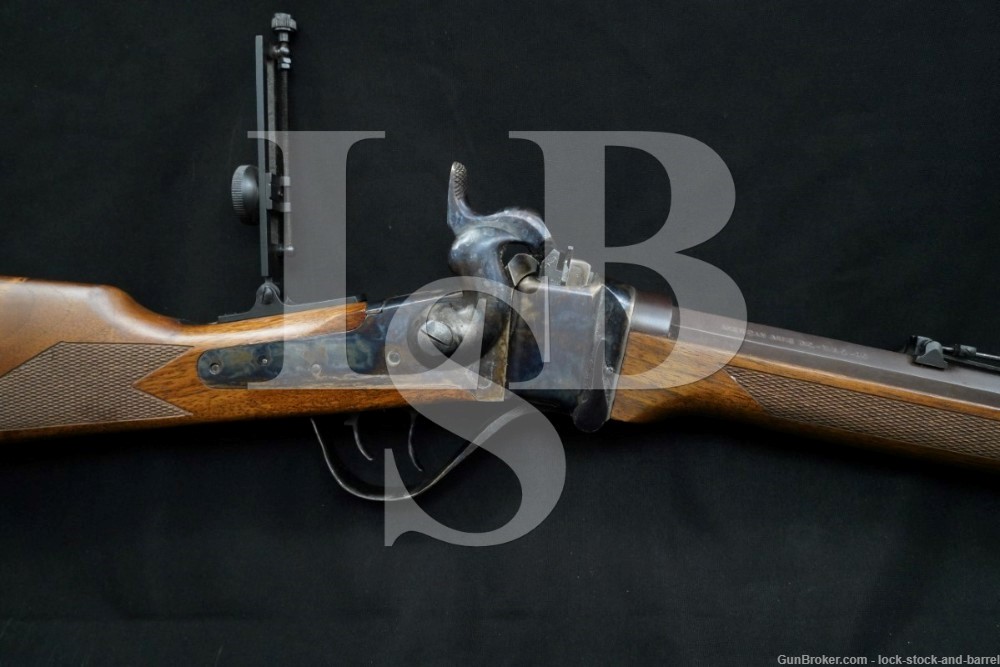 Sights/ Optics: There is a globe style front sight dovetailed to the muzzle end of the barrel that features an aperture reticle. The rear sight is a ladder marked 2-8 inclusive, that presents a “V”-notch in the down position. When raised, the ladder features a “V”-notch integral to the top and a slider with a “V”-notch. There is also a diopter which is screwed to the top-tang.

Stock Configuration & Condition/ Grip: The stocks are two-piece checkered wood featuring a detachable schnabel forend and butt with a straight wrist, straight comb and metal buttplate. The stocks have some nicks, scuffs, scratches and handling marks. There are no chips or cracks. The checkering is sharp. The LOP is 14 1/4” from the front trigger and 12 1/4” from the set trigger to the rear end of the buttplate. The buttplate has some light handling marks. Overall, the stocks are in Very Good condition.

Bore Condition: The bore is mostly bright with sharp rifling. There is some erosion in the bore.

Overall Condition: The rifle retains about 85% of its metal finish. There are some scuffs, nicks, scratches and handling marks on the metal surfaces of the rifle. Notably, there is a patch of oxidation on the bottom tang. The markings remain clear. The screwheads are serviceable. Overall, the rifle is in Poor condition due to a mechanical issue but would otherwise rate in about Very Good condition.

Mechanics: The action does not function correctly. There is an issue with the hammer and it will not cock. We have not fired this rifle. As with all used firearms, a thorough cleaning may be necessary to meet your maintenance standards.

Our Assessment: This IAB manufactured Sharps rifle is a single-shot double-set trigger lever actuated falling block rifle chambered for .45-70 Gov. cartridges. The rifle pays homage to the classic sharps rifle, named after its inventor Christian Sharps. The rifle was used during the intercommunal fighting between abolitionists and their political opponents in what is remembered today as Bleeding Kansas (circa 1850s). The rifle was nicknamed the Beecher’s Bible after prominent abolitionist Henry Ward Beecher who supplied them to his allies in Kansas during the fighting. The rifle would see use in the Civil War mainly by Union forces. Following the war the rifle would be used by hunters during the westward expansion, it was particularly useful for commercial buffalo hunters and frontiersmen. The rifle would see a resurgence in popularity following the 1990 Western Quigley Down Under where Tom Selleck’s title character used the famous rifle. This modern replica pays homage to the famous rifle which has seen growing popularity among hunters. The rifle has an issue with the hammer, but once that is resolved it should prove a worthy companion. Good luck on your bid!