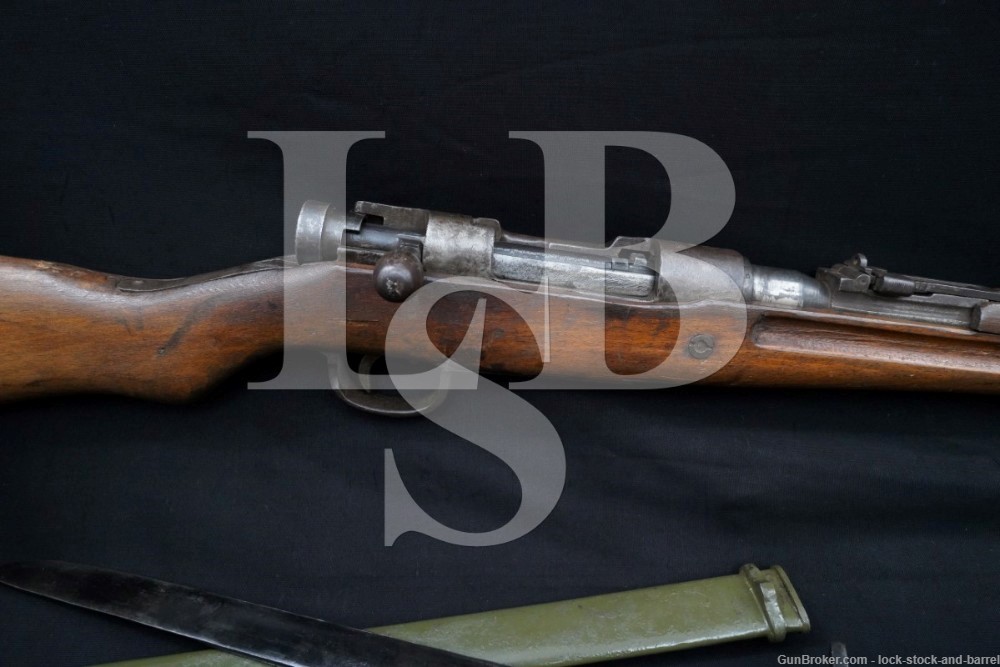 Sights / Optics: The front sight is an inverted “V” between two protective ears. The rear sight ladder has a fixed aperture when down and a sliding aperture when flipped up. The ladder is marked from “3 – 15”.

Stock Configuration & Condition: The hardwood stock has a pistol grip, finger grooves, straight comb, and a metal buttplate. There is a sizable chip just left of the lower tang. There are splits on both sides of the buttstock near the plate. There are several scattered compressions, nicks, and scratches with some notable gashes on the hand guard. The wood is shy of the plate at the toe. The LOP measures 12 3/8” from the front of the trigger to the back of the buttplate. The plate shows erosion and pitting. The stock rates in about Fair-Good overall condition.

Bore Condition: The lands are bright and the grooves are gray. The rifling is well defined. There is light erosion in the grooves.

Overall Condition: This rifle retains about 40% of its metal finish. The barrel shows thinning to the finish. The receiver & bottom metal show small scratches, heavy oxidation and discoloration. The bolt shows scattered erosion and the handle has turned to a dark patina. The nose cap and barrel band have turned patina and show oxidation. The screw heads show use. The receiver markings are deep. Overall, this rifle rates in about Fair-Good condition.

Box, Paperwork & Accessories: Included is a bayonet with a scabbard. The scabbard has been painted green.

Our Assessment: This Navy Special Type 99 Arisaka is a rare rifle produced by the Yokosuka Naval Yard between 1943 and 1945. This one has a Great looking “naval anchor & flower” marking on the top of the receiver. About 14,000 NavySpecial Type 99 rifles were manufactured for Imperial Japanese Navy use during WWII. They are based on the Type 99 Arisaka but have unique features. The Naval Special Type 99 uses cast iron parts, including the receiver. The barrel and the bolt are made of steel. The bolt locks into the barrel extension for firing, not the cast iron receiver. Although there are no Arsenal marks on these rifles it is believed that they were manufactured at Yokosuka Naval Arsenal. For more see page 53 of Duncan McCollum’s book, Japanese Rifles of World War II. Please see our photos and good luck!