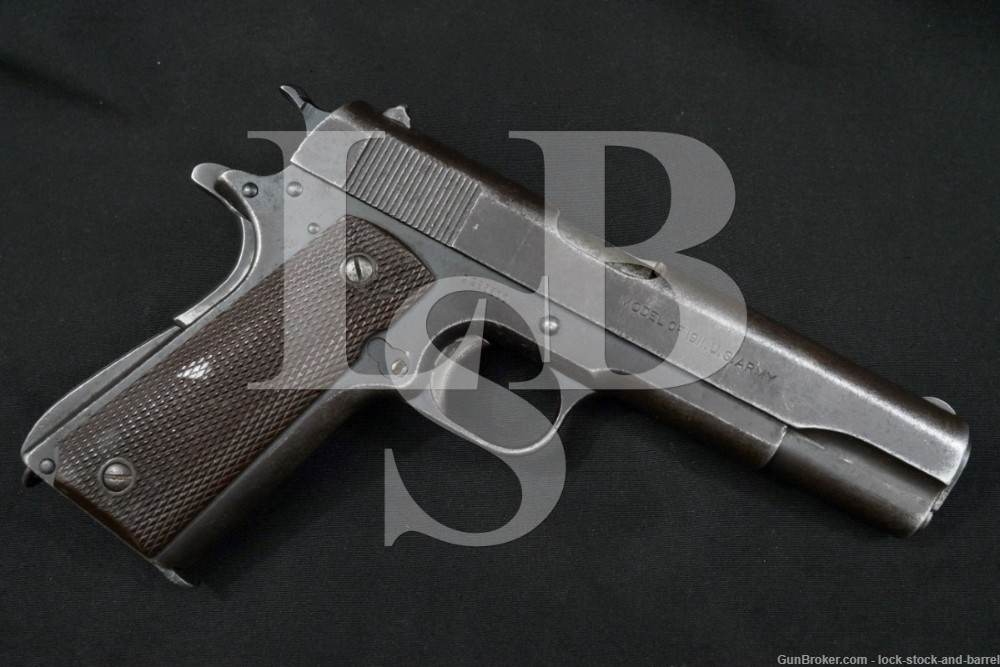 Caliber: The barrel has been re-chambered and the bore sleeved for use with 7.62x25mm Tokarev cartridges. The conversion does not appear to have been done by a factory or arsenal, and the pistol should be inspected by a qualified gunsmith prior to firing.

Stock Configuration & Condition: The grips are two-piece checkered brown plastic with reinforcement rings around the grip screws and reinforcement ribs on their interior. The grips have light-moderate handling wear with some scattered nicks, scuffs and scratches, most notable on the right panel. There are tool marks around the grip screws. The checkering is generally well defined. There are no chips or cracks. Overall, the grips are in Good-Very Good condition as not original to the gun.

Finish Originality: Refinished, the mainspring housing, trigger and some other small parts are replacements. The barrel is not original and has been re-chambered and re-lined for use with 7.62x25mm Tokarev cartridges.

Bore Condition: The rifled portion of the bore is semi-bright with sharp rifling. It shows scattered light erosion and some minor pitting. The chamber has been roughly reamed and appears too long for the cartridge.

Overall Condition: This pistol retains about 10% of its metal finish. Remaining finish is scattered, mostly in protected areas such as the scallops on the slide in front of the dust cover, the top edges of the frame under the slide and around the grips and controls. Most edges are worn to white. Other surfaces have gone to a light-moderate patina with scattered surface oxidation and erosion, most notable around and under the grips. The grip areas show handling wear. There are scattered nicks and scratches. The left slide flat has some scraping where there is a pin which appears to be connected to the breech-face where it is built up for the smaller case-head. The ejection port has been opened up at the front edge on the top-right, likely to provide clearance for loaded cartridges. The action shows operational wear. The screw heads are tool marked with serviceable slots. The markings range from clear to worn, but legible. Overall, this pistol is in Fair condition as converted.

Mechanics: We recommend inspection by a qualified gunsmith prior to firing due to the condition of the chamber. When operated with snap-caps, the magazine would only hold five rounds, could only be inserted in the pistol when loaded with one or two, and the pistol does not properly eject. Otherwise, the action functions properly. It has both a manual and grip safety and the trigger pull is crisp. The slide has light-moderate play to the frame. We did not fire this pistol. As with all used firearms, a thorough cleaning may be necessary to meet your maintenance standards.

Box, Paperwork & Accessories: This pistol comes with a single magazine. The magazine has been modified with the front cut away to allow 7.62mm Tokarev cartridges to be inserted. Five cartridges can be put in the magazine, but it can only be inserted into the pistol when loaded with one or two. The magazine has light operational wear, some minor surface oxidation, tool marks on the sides of the floorplate at the front, intact feed lips and a strong spring.

Our Assessment: The 1911 and 1911-A1 pistols served the military of the United States from 1911 to 1985, through two World Wars and the Korean and Vietnam wars. They gained a reputation as a reliable handgun with plenty of stopping power, and are held in high regard by those who have used them. This example is a U. S. Government marked Colt 1911 pistol made toward the end of WWI in 1918. Since then, the pistol has seen some modification which includes later 1911A1 trigger and mainspring housing. By far, the most notable modification is the conversion of the pistol for use with 7.62x25mm Tokarev cartridges. Though not exclusively, such modification was typically performed in China and Vietnam. Many 1911s were given to Chinese forces during WWII and there were many captured by the North Vietnamese during the Vietnam war. In either case, the Tokarev ammunition was typically more available to Chinese or Viet Cong/NVA forces than .45 ACP. As far as we know, such conversions were not commonly done large-scale, but would rather be one-off conversions done by an armorer or small machine works on individual pistols, and that is likely what happened to this one. The pistol is in Fair condition, consistent with its age and likely use. The conversion of the barrel is a little bit rough and the pistol does not appear to eject properly, so it should be inspected by a gunsmith prior to firing. In any case, this is a very interesting piece which has had a long and apparently interesting life. We only wish it could tell us its story. Please see our photos and good luck!